10 Years After Submission, the FSM, Papua New Guinea, and Solomon Islands’ Joint Claim for Additional Seabed Approved by Commission under the Law of the Sea Convention 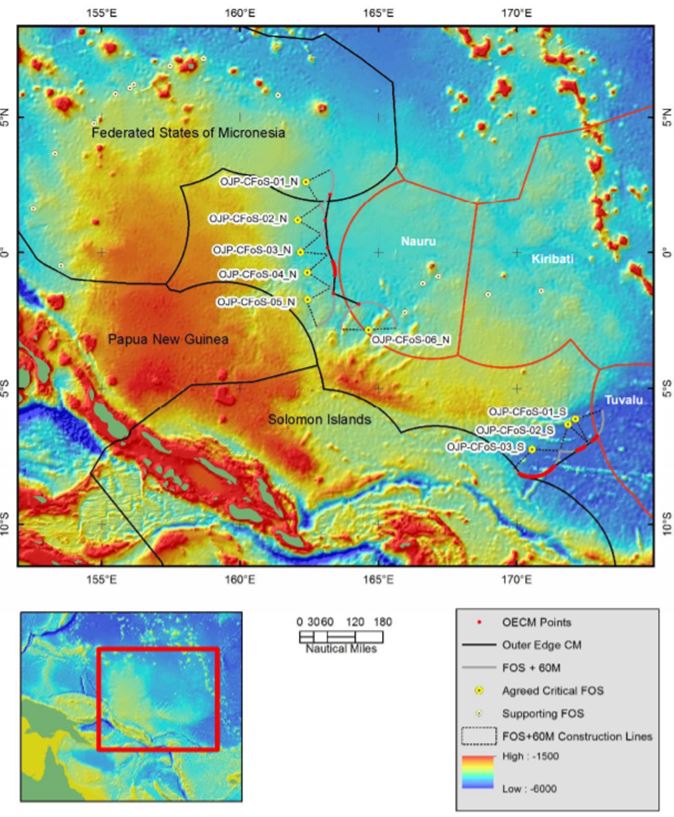 10 Years After Submission, the FSM, Papua New Guinea, and Solomon Islands’ Joint Claim for Additional Seabed Approved by Commission under the Law of the Sea Convention

PALIKIR, Pohnpei—The United Nations’ Commission on the Limits of the Continental Shelf (Commission) in New York recently made public its approval and endorsement of a joint claim from the Federated States of Micronesia (FSM), Papua New Guinea, and the Solomon Islands, over 600,000 square kilometers (230,000 square miles) of additional seabed on what is known as the Ontong Java Plateau, south of Kapingamarangi Atoll. The Division for Ocean Affairs and the Law of the Sea’s Office of Legal Affairs publicized the summary recommendation on its website here: https://www.un.org/depts/los/clcs_new/submissions_files/fmpgsb32_09/2017_03_17_OJP_SumRec_COM_for%20website_10-06-2019.pdf

The joint claim was lodged in 2009, taking the FSM and its partners approximately ten years before the technical examination process, and disposition of the claim, was fully completed.

The technical examination process involved national teams from Palikir, Port Moresby, and Honiara, with external experts from Canada, the United Kingdom, and the United States, engaging in over a dozen meetings and exchanges of views on copious amounts of data and information regarding the Ontong Java Plateau. While the process was both complex and lengthy, the FSM National Government recognizes that it was also positive and constructive.

The legal implication of endorsing the extension of the continental shelf claim is that claimers of the extension (i.e. the FSM, Papua New Guinea, and the Solomon Islands) are vested with sovereign rights to explore the natural resources on the seabed area for possible oil, gas, minerals, and living organisms that may be of scientific or commercial value.

Among the minerals buried in continental shelves are rare earth metals, which are essential ingredients for high-tech hardware such as solar panels and semiconductors.

As successful Joint Claimants, the FSM, Papua New Guinea, and the Solomon Islands are expected to deposit with the Division of Ocean Affairs and the Law of the Seas’ Office of Legal Affairs the precise coordinates of the outer limits of their continental shelf extensions. It is possible that the Nation and its two partners would, amongst themselves, enter into an agreement of further cooperation, delimitation, or other forms of management and regulation of the additional vast area of seabed, according to their needs, capacities, and preferences.

Questions on legal issues can be addressed to the FSM Department of Justice, which can be contacted at +691-320-2644.

We have 284 guests and no members online