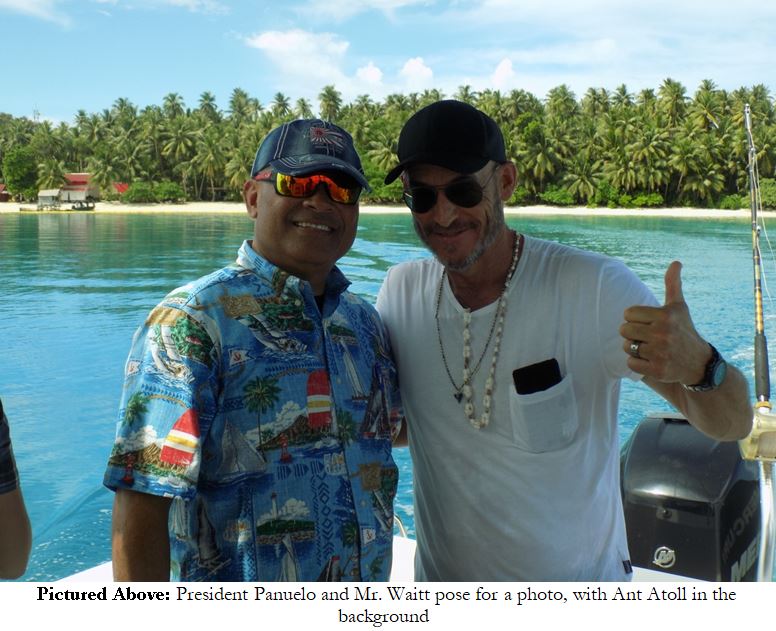 PALIKIR, Pohnpei—On July 25th, 2019 His Excellency David W. Panuelo, President of the Federated States of Micronesia (FSM), and the Honorable Yosiwo P. George, Vice President of the FSM, received Mr. Ted Waitt, philanthropist and founder of the Waitt Foundation and Institute, in a highly anticipated meeting to discuss the Nation’s contemporary environmental protection and conservation measures, and to determine a potential partnership between the FSM National Government and a group of powerhouse nonprofits. Also in attendance were the Honorable Marcelo K. Peterson, Governor of Pohnpei State; the Honorable Innocente Oneisom, Speaker of the Chuuk State House of Representatives; the Honorable Arthy G. Nena, Lieutenant Governor of Kosrae State; and the Honorable Jesse Salalu, Lieutenant Governor of Yap State, in addition to members of the President’s Cabinet and representatives from Oceans 5 and the Blue Prosperity Coalition.

A follow-up to President Panuelo’s meeting with the National Geographic Society’s CEO Tracy Wolstencroft during his trip to Washington D.C. in May 2019, the discussion began with the President reiterating the relevance and importance of environmental protection. “Throughout the Pacific Islands, subsistence agriculture is the mode of survival here—so environmental preservation…has been a long tradition,” the President said. “No matter how much we try to develop… if we don’t care for the environment, there will come a day where we learn that we cannot eat money.”

The President continued by emphasizing what the FSM has already done to promote and protect its environmental heritage, including the development of Conservation Societies for each of the FSM States, the Technology for Tuna Transparency (T3) Challenge—which seeks to ensure 100% transparency in the Nation’s tuna fisheries by 2023—the development of numerous Marine Protected Areas and, among additional successes and goals, the Micronesia Challenge—of which the Nation and its regional allies agreed in the 2019 Micronesian Islands Forum to effectively manage at least 50% of marine resources by 2030.

“My view of the world is that we are a sovereign Nation…but as a Nation we exist in the World, and so we are global citizens who carry within ourselves equally global responsibilities,” the President said. “So the relationship we have with our ocean, our waters, and our biodiversity is something that…has to be first and foremost.”

In response, Mr. Waitt described how the Blue Prosperity Coalition—which is comprised of 19 global ocean organizations and experts, including the Waitt Institute, National Geographic Pristine Seas, Oceans 5, and Dynamic Planet—can assist the FSM with protecting its environment, with a focus on conserving its marine resources.

“Everything we do with the Blue Prosperity Coalition is…science-based, and done in consultation with the community. We’re here to help [the FSM]…be a model for the rest of the world,” Mr. Waitt said. “The [FSM’s environmental heritage] is a treasure for the whole world…but if it doesn’t benefit the citizens of the FSM, then what’s the point? That’s why…we [have] to be good for the environment and for the economy.”

“We’d be honored to assist in [conserving] this wonderful treasure, that’s a global treasure, to help you protect it and build a robust and vibrant economy,” Mr. Waitt continued.

After the meeting proper, President Panuelo and Mr. Waitt visited Ant Atoll to continue discussing how the FSM can protect, promote, and benefit from, its natural environment. It was mutually agreed that further announcements, if any, on their discussions would be disseminated at an appropriate international venue, such as the United Nations General Assembly.

We have 386 guests and no members online