Leo Falcam Jr. Selected by the Joint Committee on Compact Review & Planning to be the FSM’s Chief Negotiator for the Expiring Provisions of the Compact of Free Association, as Amended

Leo Falcam Jr. Selected by the Joint Committee on Compact Review & Planning to be the FSM’s Chief Negotiator for the Expiring Provisions of the Compact of Free Association, as Amended

PALIKIR, Pohnpei—On July 31st 2019 Leo Falcam Jr., Chief of Staff to His Excellency David W. Panuelo, President of the Federated States of Micronesia (FSM), was selected by the Joint Committee on Compact Review & Planning (JCRP) to be the Nation’s Chief Negotiator in the anticipated upcoming negotiations with the United States of America on the expiring provisions of the Compact of Free Association, as Amended (COFA). Mr. Falcam was recommended by President Panuelo to be the Chief Negotiator in a letter to the JCRP a few weeks prior to the selection by JCRP.

As a 30-year Marine Aviation veteran of the U.S. Military with demonstrated experience in tactical, operational, and strategic levels of National Defense planning and policy implementation, Mr. Falcam’s military service—which concluded with his retirement as a Colonel in the U.S. Marine Corps—provides him a unique background into the Government of the United States’ perspective in many areas, including regional security initiatives. Among his many commendations, Mr. Falcam is the recipient of two Legion of Merit Medals, the Meritorious Service Medal, and the Humanitarian Service Medal.

“Chief Falcam is the right person for the job at this juncture in our development,” stated JCRP Chairman Asterio R. Takesy. “He is well-respected both within the FSM and the U.S. and will speak with a clear, unified voice of the country in the upcoming negotiations,” Mr. Takesy said. “In short, he is an ideal choice to advance the FSM’s interest in these critical discussions.”

Before being appointed by President Panuelo to serve as his Chief of Staff, Mr. Falcam served under former Presidents Emanuel “Manny” Mori and Peter M. Christian. Often called the “backbone” of the FSM National Government by Cabinet-level staff as well as public service system employees, Mr. Falcam commands widespread respect and admiration across all levels of Government for his integrity and fealty to the people and Government of the Nation.

In a letter President Panuelo wrote to Mr. Asterio Takesy, Chairman of the JCRP, the President said of Mr. Falcam: “The value that I endorse in my Chief of Staff does not originate from any one particular action, event, or activity; rather, it originates from the depth and breadth of experience, expertise, and credibility that he has demonstrated and enjoyed over the years, and the confidence that I, and many others, place in his ability to help our Nation to chart an effective and reasonable path towards achieving our National and self-sustaining goals.”

It is the firmly and deeply held belief of the FSM National Government that Mr. Falcam epitomizes and personifies the FSM-US relationship, as demonstrated through his lifetime of public service. The Government has complete and total trust and confidence in Mr. Falcam to assume the duties of the Chief Negotiator.

The JCRP, which has been tasked by the FSM National Government to select a Chief Negotiator on behalf of the Nation, was established as a joint committee of representatives from the FSM National Government’s Executive & Legislative Branches, as well as representatives from each of the four FSM States. It was established, among other purposes, to help coordinate the Nation’s preparation for effective and smooth post-Compact government and to prepare for the renegotiation with the U.S. of those Compact economic provisions scheduled to expire in 2023.

For more information on the JCRP, visit their website at https://jcrp.gov.fm/ 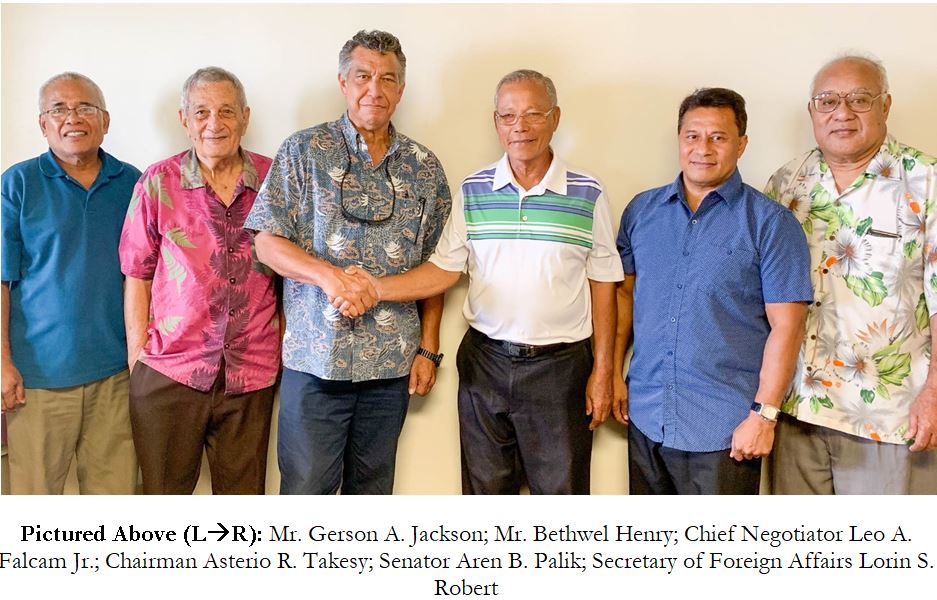 We have 1442 guests and one member online