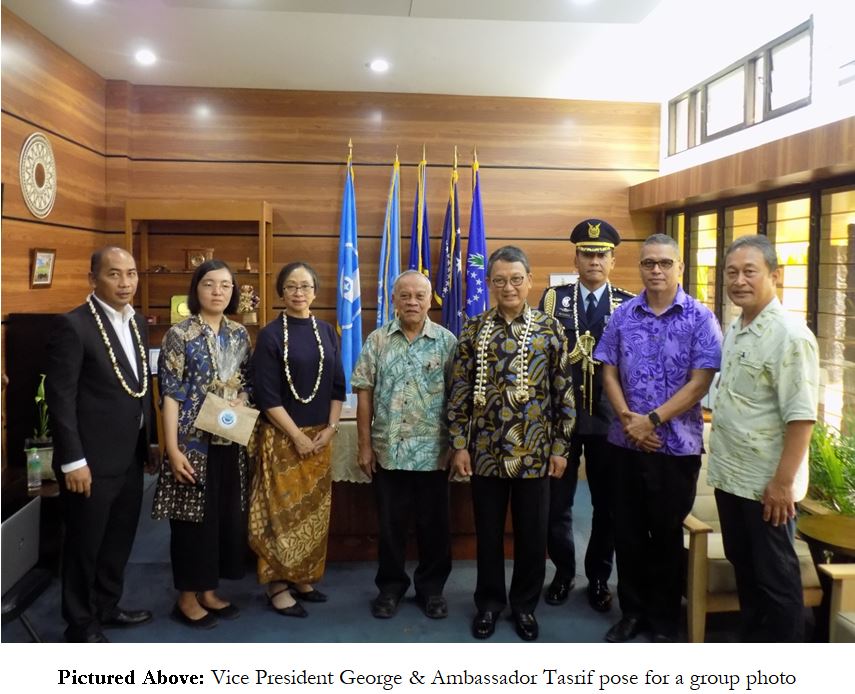 PALIKIR, Pohnpei—On July 30th 2019 The Honorable Yosiwo P. George, Vice President of the Federated States of Micronesia (FSM) received His Excellency Arifin Tasrif, Ambassador of the Republic of Indonesia, in a courtesy call. Ambassador Tasrif was visiting the FSM to attend the Joint National Inauguration Ceremony.

“Mr. Vice President,” Ambassador Tasrif began, “Our relationship started in 1991 and since then…it’s been getting stronger and stronger.” Ambassador Tasrif referenced the 1st Pacific Exposition held in Auckland, New Zealand earlier in the month, where two representatives from the FSM attended to showcase the Nation’s investment and tourism opportunities.

“We will be…wishing you health and success to run your Government,” Ambassador Tasrif continued. “We are very happy to [work together] if we can also participate to meet the [Nation’s vision].”

“We thank you very much for Indonesia’s friendship, and convey our appreciation for your presence in the [Joint National] Inauguration,” Vice President George began. “We want to build the relationship with Indonesia so very much. We are neighbors!”

Vice President George and Ambassador Tasrif spoke at length about the various States of the FSM, and how FSM-Indonesia relations can be strengthened even further. Ambassador Tasrif noted, for example, that he promised the Honorable Johnson S. Elimo, Governor of the FSM State of Chuuk, that he would visit Chuuk someday. Vice President George shared his warm feelings towards Chuuk but then—pointing to the bowl of Kosraean tangerines between them—suggested that many of Kosrae’s delicacies are also worth sharing with the world.

“Please help yourself,” the Vice President said, offering the Ambassador a tangerine.

The Ambassador appeared to enjoy the fruit—and so much so that immediately following several bites the conversation turned to how Indonesia can help the FSM’s farmers.

“Our Government,” the Ambassador said, “is very willing to accept young farmers for training in Indonesia. We have a huge research agriculture research center in West Java.”

“Thank you for your offer,” Vice President George replied. “I invite our Ambassador [John Fritz, based in Japan but credentialed to Indonesia] to work with you to…train our citizens. Thank you.”