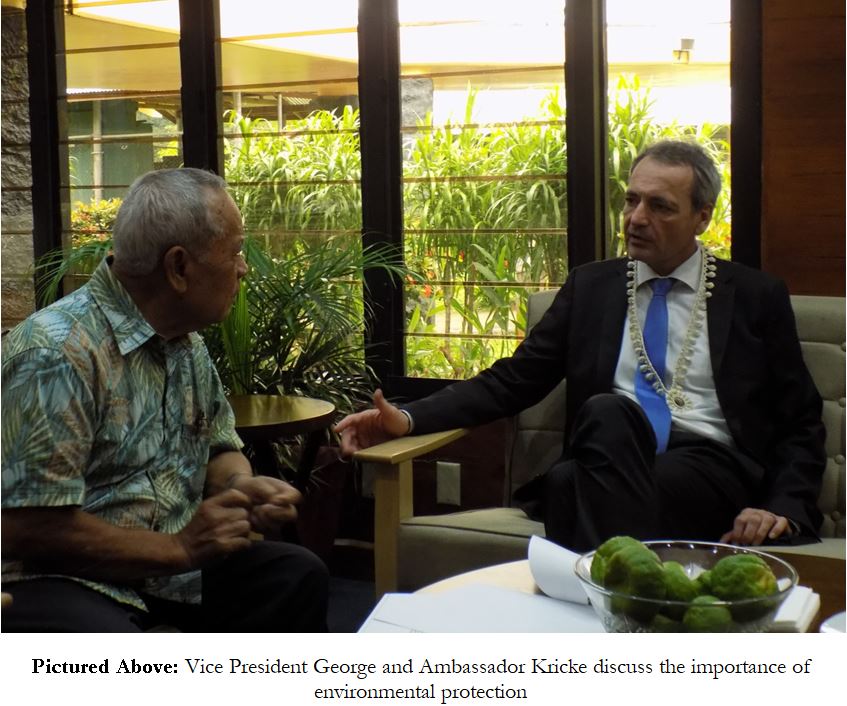 PALIKIR, Pohnpei—On July 30th 2019 the Honorable Yosiwo P. George, Vice President of the Federated States of Micronesia (FSM), receiving His Excellency Gordon Kricke, Ambassador of the Federal Republic of Germany, in a courtesy call. Ambassador Kricke was in the FSM to attend the Joint National Inauguration Ceremony, and he and Vice President George primarily spoke about the environment.

“What I found very remarkable in the President’s speech,” Ambassador Kricke said, “[is that] he wants to increase the protection of marine resources and…global heritage.”

Ambassador Kricke quickly brought up Germany’s development assistance in the region on this issue. “From the German side, we have some projects in [the Republic of the Marshall Islands]…for inter-island transport, and reducing emissions,” Ambassador Kricke said. “That might also be interesting for the FSM?”

Vice President George agreed that reducing the costs of transportation, while also addressing climate change through the reduction of emissions, is something the FSM is interested in utilizing and maximizing. “We are very supportive of that project.”

“We appreciate Germany’s support for [tackling] climate change, and the Paris Agreement. We’ll continue to look to countries like Germany to advance our [Nation’s] interest and support in [ensuring the terms of the Paris Agreement are met around the world],” Vice President George continued.

“We have a shared interest, and the Paris Agreement remains very important,” Ambassador Kricke said.

The FSM National Government extends its appreciation to the people and Government of the Federal Republic of Germany for their continued friendship and support.