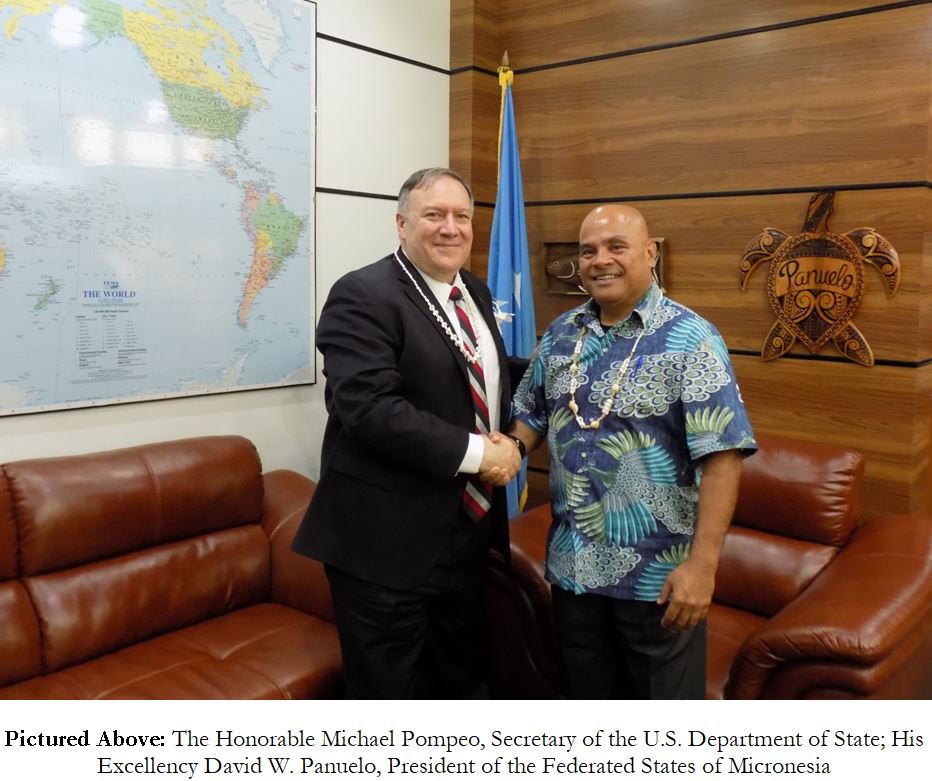 PALIKIR, Pohnpei—On August 5th 2019 His Excellency David W. Panuelo, President of the Federated States of Micronesia (FSM), received the Honorable Michael Pompeo, Secretary of the United States Department of State, in a highly anticipated meeting. The primary outcome of the meeting is that the United States of America—the FSM’s first and foremost ally, with whom we share an enduring and perpetual partnership based on shared values codified in the Compact of Free Association, as Amended (COFA)—is ready to begin negotiations on the expiring provisions of the COFA.

“We welcome you Secretary…we welcome a great friend, this is just beautiful and from the heart—we welcome you and your visit, which reaffirms our enduring relationship,” President Panuelo began. “It’s hard to express the fact that you’ve taken time to come out and visit us here in the FSM, it’s so historic. I know the people have been reading about [this meeting], and so it’s not only me…your visit has been anticipated by our citizens.”

“[The FSM] has been a great ally,” Secretary Pompeo said, noting how much he enjoyed meeting the Presidents of the Freely Associated States in Washington D.C. Secretary Pompeo also noted that the Honorable Robert L. Wilkie, Secretary of the U.S. Department of Veterans Affairs, had a terrific time visiting the Nation during the Joint National Inauguration Ceremony.

“I told you I would come here [when we met in Washington D.C.],” Secretary Pompeo continued, with a smile. “And the good news [is], we’re…[ready] to start negotiations on the COFA, which I know you’ve been waiting for. I don’t know when we’ll get started, but we now have the authority to do that. …We’re all set; we’re all clear, so we’ll set a path forward before too long.”

“This is the biggest news…this message you just shared, I think it’s the long awaited news that our citizens are waiting for,” President Panuelo said. “A lot of our citizens here and residing in the U.S., they worry about their future [and the future of the COFA]…thank you.”

The conversation drifted amongst several topics, ranging from how to fix the “bottleneck” in implementing infrastructure funding to broader discussion on the FSM-U.S. relationship which—both President Panuelo and Secretary Pompeo reaffirmed—is enduring.

“We thank you and your role in the United States in providing peace, stability, and freedom of navigation in the Indo-Pacific region,” President Panuelo said. “One of the things I want to say here, and I will reiterate outside when we have the Press Conference, is…our relationship with the U.S. is first and foremost. We do have a relationship with China, but…that’s purely on economic and technical cooperation.”

“You serve in our military,” Secretary Pompeo said in return.

“And thank you for offering to lay a wreath to respect our fallen soldiers,” President Panuelo said. “You’re a sincere man, Secretary, and I believe in that sincerity and friendship our [two] Nations have built [together].”

“We are great friends,” Secretary Pompeo replied. “It’s great to see you.”

During the discussions, President Panuelo introduced Leo Falcam Jr., his Chief of Staff, who he recommended to be the Nation’s Chief Negotiator. The President noted that this is a signal that the FSM is committed and ready to begin engaging the United States in the renewal of the expiring provisions of the COFA.

Both President Panuelo and Secretary Pompeo noted in private conversation between each other that they’re certain negotiations will conclude faster than some may expect, due to the mutual respect and values the FSM and the United States share.

The FSM National Government is appreciative beyond words that the Government of the United States of America has completed the necessary work to allow negotiations for the expiring provisions of the COFA to begin, and looks forward to completing these negotiations as soon as possible.