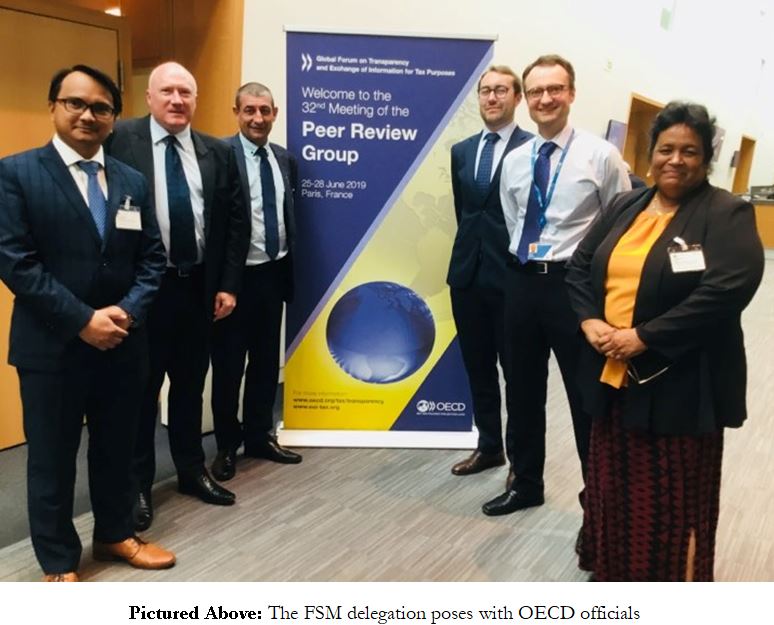 PARIS, France—On July 30, 2019 the Federated States of Micronesia (FSM) has received an overall rating of 'Largely Compliant' from the Organisation for Economic Co-operative Development’s (OECD) Global Forum on Transparency and Exchange of Information for Tax Purposes. The Global Forum is mandated to ensure that jurisdictions around the world adhere to, and effectively implement, the international tax transparency standards. These reviews assess jurisdictions against international standards, which incorporate beneficial ownership information of all legal entities and arrangements.

In 2014, during the first round of peer reviews the FSM’s legal and regulatory framework was evaluated and it was concluded that it did not meet international standards, i.e., the Nation was considered Non-Compliant.

Since the previous review, the FSM has implemented the Exchange of Tax Information Act of 2016 and its Regulations, as well as two further Regulations dealing with the availability of ownership information.  The new Act and Regulations reaffirm the FSM’s commitment to combating illegal tax evasion, money laundering, and financing of terrorism, through the implementation of effective international measures to exchange information for tax purposes.

The Honorable Sihna N. Lawrence, Secretary of the Department of Finance & Administration, led the FSM Delegation to the OECD Headquarters in Paris in June to address the Peer Review Group (PRG).“I’m very pleased that the FSM received such a positive report and that our efforts in improving our transparency and tax standards have been recognized internationally,” she said. Other agencies of the FSM National Government that contributed to this positive outcome include the FSM Registrar of Corporations, the FSM Banking Board, the FSM Insurance Board, and FSM Department of Justice (DOJ), which provided legal support and advice to ensure that FSM laws and regulations were considered and respected during the PRG’s review process.

His Excellency David W. Panuelo, President of the FSM, has been following this work closely, and stated that he is “…tremendously pleased with the progress that was achieved by outgoing Secretary Lawrence in this area,” and noted that “As I said in my Inaugural Address, transparency and accountability will be key focal areas during my presidency.”