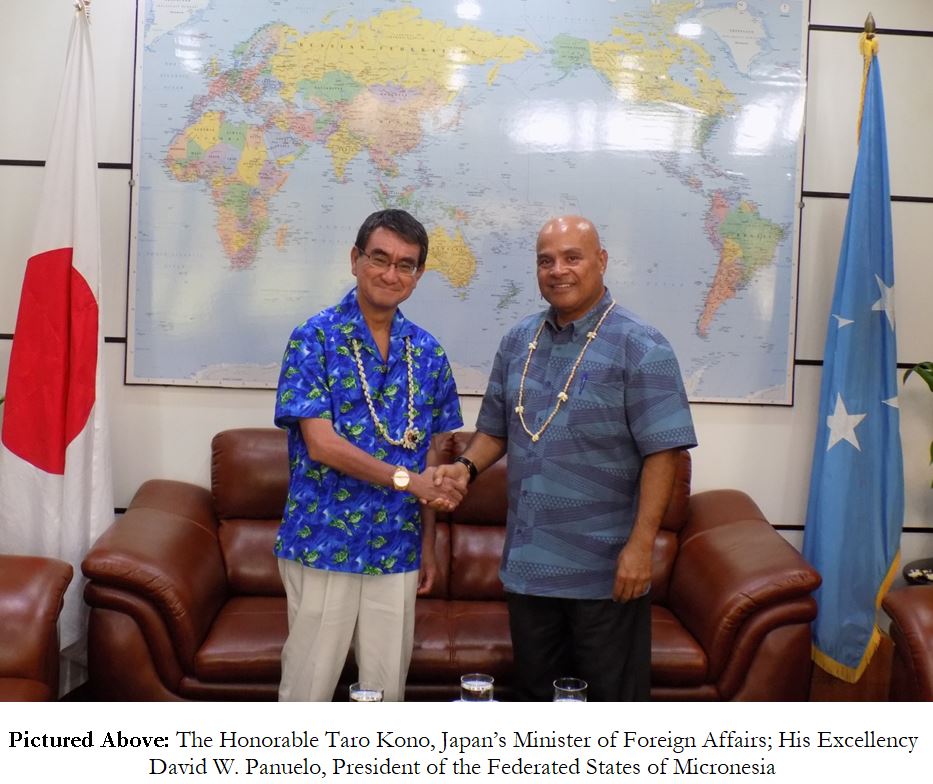 PALIKIR, Pohnpei—On August 7th, 2019 His Excellency David W. Panuelo, President of the Federated States of Micronesia (FSM), received the Honorable Taro Kono, Minister of Foreign Affairs in the Government of Japan, in a historic visit. The meeting marked the first time a Minister of Foreign Affairs officially visited the Nation, and approximately 48 hours after the Honorable Michael Pompeo—Secretary of the U.S. Department of State, the United State’s equivalent to Minister Kono—met with President Panuelo. The primary outcome of the meeting is that the FSM-Japan relationship, already known for being unique and profoundly powerful, will become even stronger in the days, weeks, years, and decades to come.

“We welcome you, Minister Kono; this is a historic visit, the very first time Japan’s Foreign Minister has graced our islands,” President Panuelo began. “People [in the FSM] have never heard so many sirens [indicating that a very important person is being protected and transited to meet with the President]. Our citizens are excited about your visit as well.”

President Panuelo described how the Nation’s relationship with Japan is enduring and unique. The President emphasized that a primary component of the Nation’s relationship with the U.S.—including security arrangements, and commitments to a free and open Indo-Pacific—are augmented by Japan’s dedication to peace, and its active participatory role in the FSM’s development.

“It’s a great pleasure and…honor to welcome a very true friend, Japan, to our shores. And you, Minister Kono, embody that relationship between our two nations,” President Panuelo continued.

“FSM and Japan have a history going back for so many years,” Minister Kono said. “We have to do this much more often. We have decided to increase our commitment to the Pacific Island region, and hopefully we can enhance the cooperation between the FSM and Japan.”

Minister Kono and President Panuelo discussed how infrastructure and people-to-people relationships go hand-in-hand. “We really need to work on a flight connection between Japan and the FSM,” Minister Kono said. “I told Director [Kohei Nakamura of the Ministry of Foreign Affairs’ Oceania Division] that he will be personally responsible for establishing a direct flight connection here.” Minister Kono repeated this statement in the Press Conference which followed after the bilateral meeting, emphasizing the sincerity of the commitment and the urgent need for such a development to occur.

“We’re going to be doing a lot of cooperation with the United States and Australia,” Minister Kono continued, describing initiatives ranging from disaster prevention support to cooperation in tackling illegal, unregulated, and unreported fishing. “We are very happy to sign for the project to improve the security of [the FSM’s] airports, post offices, and seaports.”

“And I am happy to report to you, Minister, that the [Dekehtik, Pohnpei] port [land issue] has been taken care of,” President Panuelo replied.

Pohnpei State’s port has been assessed and evaluated by the Japan International Cooperation Agency (JICA) to determine how it can be expanded and improved, and the project to expand the port was at risk of collapsing until the legal issues surrounding it were recently concluded.

President Panuelo noted that the Pohnpei port extension project had been requested by the FSM National Government several years prior, “So we’re happy to see the progress in terms of the technical assessment with JICA. This project is so very important; we wish to reiterate it again for your support, Minister Kono.”

Minister Kono and President Panuelo then spent most, and approximately equal parts, of their remaining conversation on topics of mutual interest in regional security and people-to-people relationships.

“Keeping the Indo-Pacific region stable and peaceful, with the freedom of navigation, is very important,” President Panuelo said. “We have been and want to continue working closely with [Japan] to keep a free Indo-Pacific.... We want to assure you that with the FSM, Japan, United States, and Australia, we can work together to keep the region peaceful.”

President Panuelo noted that people-to-people relations are perhaps the most visible and meaningful to citizens of the FSM, who may not know the specific details of regional security arrangements but are highly aware of the JICA Volunteer teaching mathematics at their child’s elementary school, the opening of a Japanese film festival, or infrastructure projects ranging from gymnasiums to airport runway extensions.

“The Government of Japan has decided to invite children from the Pacific region to come and watch the [2020] Tokyo Olympic Games,” Minister Kono said. The FSM National Government looks forward to advocating for ensuring as many children of the FSM have the opportunity to attend the 2020 Tokyo Olympic Games as possible.

The FSM and Japan celebrated their 30th anniversary of formal diplomatic relations in 2018, but have over 100 years of shared history. The FSM National Government looks forward to strengthening and enhancing its cooperation with the people and Government of Japan across all sectors for the benefit of the Nation’s citizens.