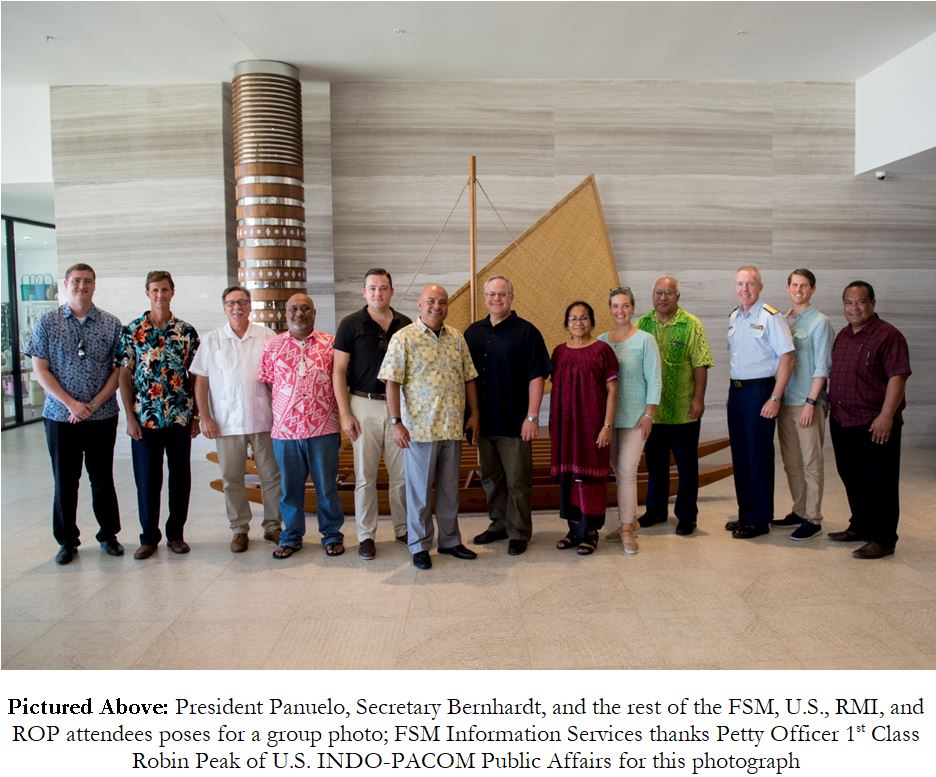 NADI, Fiji—On August 17th 2019, at the invitation of Honorable David Bernhardt, Secretary of the U.S. Department of Interior, His Excellency David W. Panuelo, President of the Federated States of Micronesia (FSM) met with the Secretary of the Department of Interior and the U.S. delegation that attended the 50th Pacific Islands Forum (PIF) in the Republic of Tuvalu. The purpose of the meeting was for the delegations of the FSM, the Republic of the Marshall Islands (RMI), and the Republic of Palau to share their views on matters of mutual interest, including the Compact of Free Association, and to hear the U.S.’ perspective on regional issues.

“This is a good time to hear from you,” Secretary Bernhardt began, inviting the delegations to converse about upcoming discussions of importance related to the Freely Associated States (FAS)’ countries’ Compacts of Free Association.

“Thank you, Secretary,” President Panuelo replied. “First off, I thank you, Secretary, for the opportunity to meet you again…the visit of course by [the Honorable Robert L. Wilkie] to the FSM during the Inauguration, and then [the Honorable Michael] Pompeo visiting right after.” The President expressed grateful appreciation for the high level leadership visits to the FSM by the Government of the United States, and described how the FSM welcomes news that the U.S. State Department has been given the authorization to begin the process of organizing and conducting negotiations on the expiring provisions of our Compact of Free Association.

“That was the biggest news that the citizens have been waiting for,” the President said.

“But,” the President continued, “I think we need to look at time—time is of the essence, and we’re looking at 2023…I think we overshot the implementation of [the 2003 Amendments to the Compact of Free Association].” The President advised that, in his view, the delay in implementing the amendments of the Compact lead to unnecessary hardship for regular men and women and their families, and that it is vital that the new negotiations conclude prior to the actual expiration presently laid out in 2023.

The U.S. delegation, lead by the Secretary of the Department of the Interior and inclusive of representatives of the U.S. State Department, U.S. Coast Guard, the National Oceanic & Atmospheric Administration (NOAA), and the U.S. White House’s National Security Council, took the opportunity to update the FAS countries on some specific ongoing programs that are supporting the Pacific region. Among these were an update from NOAA on its monitoring capacity and data analysis, and an update by the U.S. Coast Guard on search and rescue operations’ support, and ongoing implementation of the ship-rider agreement which allows for FAS law enforcement officers to accompany, and assist, U.S. military vessels in periodic patrol operations of our exclusive economic zones (EEZs). (Only FAS law enforcement officers can enforce the laws of the FSM, the RMI, and Palau respectively.)

President Panuelo and Ambassador Ishoda, representing the RMI, were equally assertive in recommending that the visibility in the greater Pacific region be enhanced or strengthened. Given the unique relationship that exists between the United States and the FAS countries, it is imperative that the FAS countries and the United States are able to effectively coordinate the visibility of presence and valuable U.S. support in the region.

The President also advocated for greater capacity to streamline the usage of Compact Sector Grants, referencing nearly 200 million dollars of backlogged infrastructure funding. The President acknowledged that both the FSM and the United States bear some level of responsibility for this, and called for greater cooperation by the U.S. and the FSM to address this backlog.

It was advised that greater flexibility in using the FSM’s Compact-funding, in addition to greater investment—including private sector investment—is encouraged by the FSM National Government. The Executive Branch is presently preparing legislation for the FSM Congress’ review and approval on foreign investment.

The Republic of Palau’s Minister of State, the Honorable Faustina K. Rehuher-Marugg,reemphasized the importance of the Joint Committee Meeting (JCM) process, and additionally drew much needed attention to the future of the Pacific Island Development Program and the necessity to revitalize its support to the Pacific Islands Forum Secretariat as a CROP Agency. Minister Rehuher-Maruggalso drew attention to the issue of the REAL ID Act and emphasized the importance of its ongoing impacts on FAS citizens currently residing in, and working in, the United States.

President Panuelo offered an intervention which described some progress towards resolving specific REAL ID Act issues. To further elaborate, Mr. Alexander B. Gray, Director for Oceania & Indo-Pacific Security within the U.S. National Security Council, discussed the ongoing efforts of the U.S. Department of Homeland Security to resolve implementation of regulation issues which would benefit and clarify the applicability of the REAL ID Act to FAS citizens.

“If I can say one last piece,” President Panuelo said. “We care about the overall U.S. presence in the Pacific. Other leaders, especially down in the South Pacific, may not have that kind of perception. So wherever it is possible, in terms of the Blue Pacific Continent and the Blue Pacific narrative…please embrace it. We need…inclusiveness in terms of U.S. leadership, especially since the U.S. [plays a key role] in providing peace, security, [stability], and freedom of navigation [in the Pacific].”

“That’s a great comment and a great way to end the meeting,” Secretary Bernhardt said. “I appreciate all the discussion.”

The FSM National Government is proud of its enduring partnership with the people and Government of the United States of America, and looks forward to the swift initiation and conclusion of the negotiations for the expiring provisions of the Compact of Free Association, as Amended.