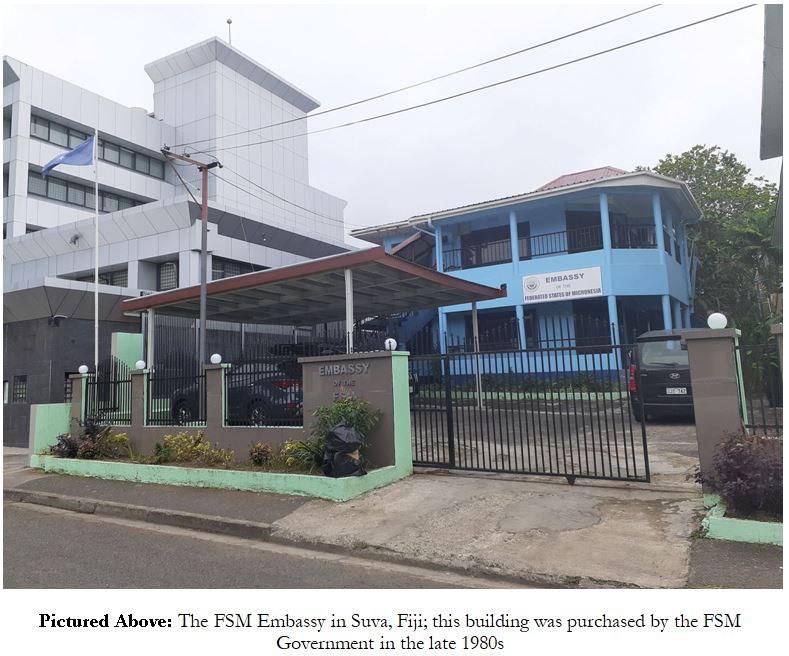 SUVA, August 22 2019 (FSMIS)—While transiting in Nadi after the 50th Pacific Islands Forum in Tuvalu, on August 19th 2019 His Excellency David W. Panuelo, President of the Federated States of Micronesia (FSM), visited Suva, capital of the Republic of Fiji, to accomplish two tasks. The first task was to meet with the FSM’s students attending the University of the South Pacific (USP), the Pacific Regional Seminary (PRS), Fiji National University (FNU), which includes the School of Medicine, the University of Fiji, and other institutions of higher education. The second task was to meet with staff to discuss the operations and activities of the Embassy in the region, and to inspect the Embassy’s facilities three facilities: the Embassy proper, the Ambassador’s residence, and the Deputy Chief of Mission’s residence. All three facilities were purchased (not rented or leased) in the late 1980s, and have been assets of the FSM National Government ever since, lessening the FSM’s in-country operating costs.

Emphasizing again that his administration is founded on the principles of public service, the President’s informal dinner-meeting with the students began with updating them on the overall developments throughout the FSM, and included the President encouraging them to continue their studies for the benefit of the Nation. “I want us to share a meal together as family,” the President said, noting that all citizens of the FSM are part of a greater whole. “I can see in your eyes and on your faces the confidence and dedication that you are all studying very hard.”

Just over 60 citizens of the FSM are studying in Fiji in fields ranging from medical training to engineering, skills the Nation desperately needs. President Anson of the FSM Student Body Organization represented the students in their questions and concerns on various issues, such as: job opportunities after graduation; the possibility of raising the minimum wage; whether the Scholarship Board can expedite their responses to student inquiries; student visa issues; and the FSM’s potential membership in USP.

While the FSM National Government, like most (perhaps all) Governments throughout the world, is unable to guarantee employment for every graduate in every field at the time of their graduation, the President noted that it’s imperative that skilled citizens return to the FSM to assist in its Nation-building efforts. Further, while providing opportunities is certainly one component of the Government, the President also advised the students that developing opportunities for themselves is of equal importance. “It may not be the most comforting response,” the President said. “But it’s what we can do. When I graduated [from Eastern Oregon University], I came back home to assist in our Nation-building, and I encourage each and every one of you to do the same. Our administration is trying to reach [and bring back] our skilled citizens from abroad…the way I see it [we can’t achieve our prosperity] without human resources.”

President Panuelo expressed that he is an advocate for the proposed bill in the FSM Congress for an 8% salary increase for public servants working for the FSM National Government, noting that inflation is “constantly rising with the cost of living, and the minimum wage isn’t catching up.” The FSM National Government is acutely aware that conversations in meeting houses, markets, and social media often discuss this issue.

However, the President noted that the FSM Constitution doesn’t allow for the FSM National Government to control the minimum wages set by the FSM States of Yap, Chuuk, Pohnpei, and Kosrae. “Citizens need to work in this process to lobby their respective governments [and elected officials],” the President said, noting again that while he is happy to say that he supports an increased minimum wage throughout all of the FSM’s States that the power to make that happen relies in the FSM State Governments.

Regarding perceived issues with expeditious communications from the FSM National Scholarship Board, the President said “I’ve already called in [to my office in Palikir] the Scholarship board…I’ve instructed them to restructure and determine how they can best respond to students, especially in terms of issuance of their awards.”

On the topic of USP membership, the President said “The [FSM National Government] will give it a very quick review. I’m leaning towards yes…but once I know for sure, I’ll work with the Congress to get the membership fees.”

The President also addressed issues with student visas, and proposed to the students one of his plans moving forward. “When I was in Tuvalu, I befriended [His Excellency Frank Bainimarama], Prime Minister of Fiji,” President Panuelo said. “I’ve instructed our Embassy to look at Fiji’s situation: if Fiji has a visa waiver with the other Pacific Island countries…then we should propose a visa waiver with Fiji, so that students aren’t having difficulty with visas.”

It was noted that the FSM students in Fiji were fundraising for the Micronesian Student Organization for an event called Pacific Night, where all Pacific Islands that are represented at each school display or perform their culture, such as through traditional dances and attire. The President advised that he would donate to this fundraiser, with the funds transmitted to the Micronesian Student Organization for the purpose of the FSM students demonstrating the Nation’s values at Pacific Night.

The FSM National Government wishes to formally extend to the people and Government of Fiji its appreciation for their kind support during the FSM delegation’s transit in Fiji, including assistance with protocol at the airport and the police escort.