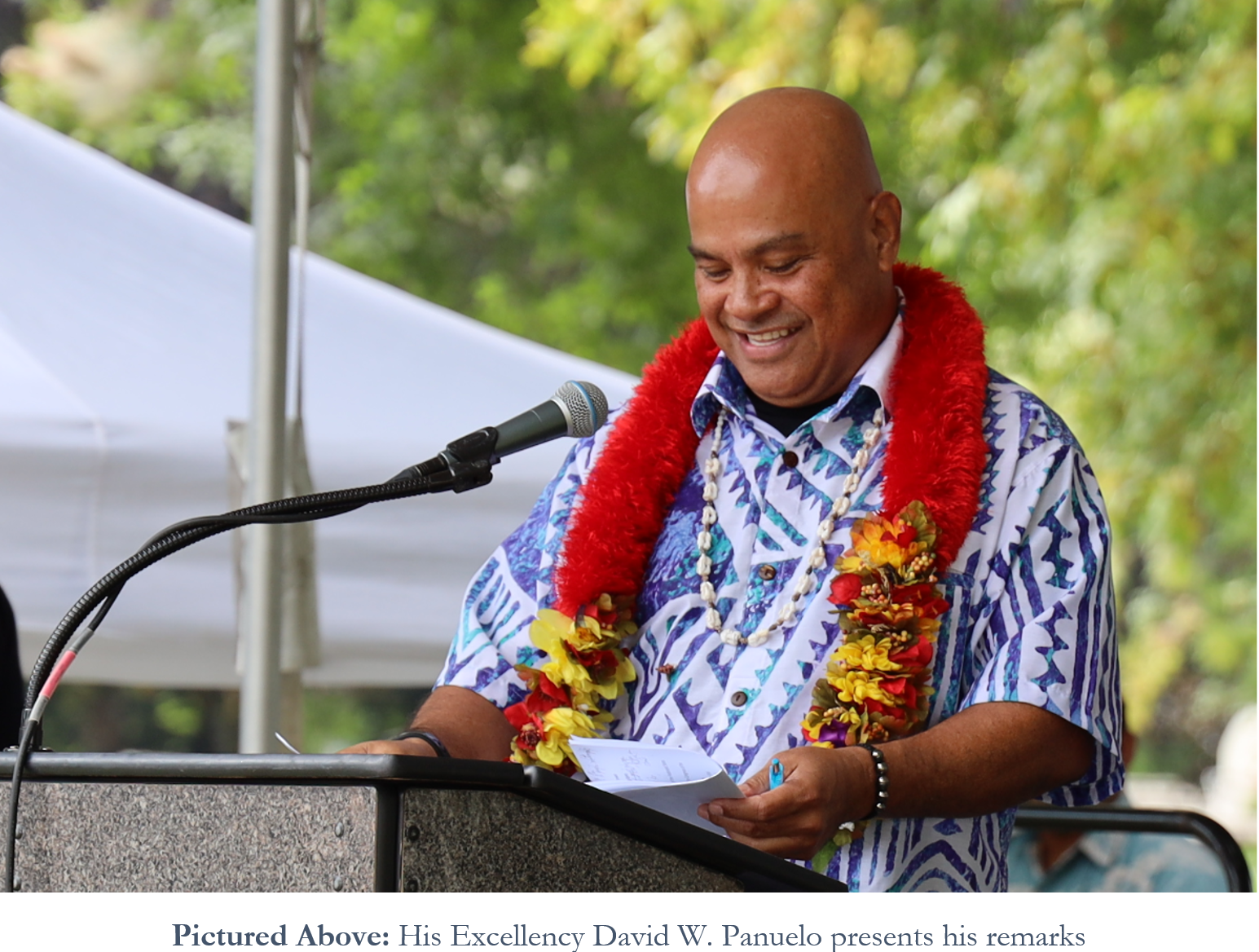 PORTLAND, Oregon—On August 31st, 2019, the community of citizens from the Federated States of Micronesia (FSM) living in the U.S. States of Oregon and Washington gathered to celebrate the 2nd annual FSM Community Day. Inclusive of dances and traditions from all four states of the FSM, as well as honored speakers and guests, traditional Micronesian foods, and more, the annual event hosted by the Nation’s Consulate Office in Portland is quickly becoming a key component of crucial citizens outreach.

Outcomes of the 2nd FSM Community Day include the assertion from both His Excellency David W. Panuelo and the Honorable Wesley W. Simina, President of the FSM and Speaker of the FSM Congress respectively, that the FSM National Government supports developing and maintaining a Special Polling Place for national elections in the city. Further outcomes include the State of Oregon’s and the State of Washington’s commitment to do their part in strengthening FSM-US relations, such as through sponsoring legislation for citizens of the FSM to receive in-state tuition, health benefits, and more, and by emphasizing that Micronesians from across the region are welcomed and appreciated residents.

The program of events began with remarks by various U.S. and FSM leaders. Emceed by the Honorable Joe Enlet, Consul General of the FSM’s Consulate, Ms. Kyeanna Henry, and Mr. Mike Pangelinan, the first speaker was Mr. Cupid Alexander, Director of Strategic Initiatives for the City of Portland representing the Honorable Ted Wheeler, the city’s Mayor.

“On behalf of the city of Portland, we’d like to express our sincerest gratitude for the time and effort you have made to be here. Our city and its surrounding region has a growing Micronesian community, and I would like to recognize Consul General Joe Enlet…for ensuring that Micronesians have access to resources, and that your voices are included in policy making,” Director Alexander said.

“We applaud the FSM’s efforts in tackling climate change…the city of Portland has taken steps to [reach] net zero carbon emissions and 100% renewable energy by 2050,” Director Alexander continued. “We hope that the FSM community will encounter a greater sense of belonging.”

Following Director Alexander were Ms. Sophorn Cheang and Ms. Anny Chiao, representatives of the Honorable Kate Brown, Governor of the State of Oregon.

“[Per the 2010 U.S. Census] Oregon is home to the 5th largest [FSM] community in the United States. …Governor Brown recognizes the contributions of [Micronesian] citizens to our State and the importance of keeping Oregon welcome for everyone,” Ms. Cheang said. “However, policy at the [U.S. National Government] level has prevented our [Micronesian] neighbors—who pay taxes and work here—from receiving…Medicaid, Section 8 housing, and the Supplemental Nutritional Assistance Program.”

“Understanding this, the Compact of Free Association Alliance National Network (CANN)…have worked tirelessly at the Oregon legislature and our local government to advocate on behalf of [Micronesians],” continued Ms. Cheang, citing examples in improving access to affordable healthcare coverage to Micronesians. “We truly appreciate the partnership and special relationship that [Oregon] has with the FSM.”

The next speaker was Ms. Grace Stratton, representative of the Honorable Ron Wyden, Senator in the U.S. Senate representing the State of Oregon. “The FSM community has contributed so much to Portland and to our state, and I am pleased that the Consulate was established to ensure the community is supported,” Ms. Stratton said on behalf of Senator Wyden. “I am proud to work on issues that this community cares about, including [the COFA Veterans Review Act], speaking out against the [Department of Homeland Security’s] unfair guidance that would make it harder [for Micronesians] to obtain [driver’s licenses], and introducing legislation to address the harmful impacts of climate change.”

The Honorable Michael Dembrow and the Honorable Lou Frederick, both Senators in the State of Oregon’s legislature, were the next to speak. “On behalf of the Oregon Senate and my colleagues...I want to say how much we treasure this relationship with the COFA people and the FSM,” Senator Dembrow said, emphasizing that Consul General Enlet was a particularly valuable ally and friend.

Senator Dembrow emphasized that the State of Oregon recognizes that climate change and its devastating impact to the Pacific is the result of unsustainable practices occurring in developed countries such as the United States and made clear that the Government of Oregon welcomes Micronesians to join the community. “The Oregon Legislature loves our FSM friends,” Senator Dembrow said.

The Honorable Carla Piluso, Representative in the Oregon House of Representatives, spoke about how the FSM-U.S. relationship is enduring and demonstrated through collaborative efforts such as those by CANN, with FSM leaders such as Joe Enlet and American leaders such as Loyd Henion working in solidarity to promote equity of opportunity and integration—as opposed to assimilation—into society.

The next speaker was the Honorable Wesley W. Simina, Speaker of the FSM Congress. “We will always be grateful for all the support and assistance that [the Pacific Northwest] has given our people. I want to make sure that that is conveyed by the Congress of the FSM,” Speaker Simina said, noting that there is a push for Portland to become a Special Polling Place, that the FSM National Government is ready for negotiating the COFA, and requesting cooperation and support from all citizens of the FSM in matters big and small. “We will continue to work with the U.S. Government in ensuring that our relationship remains strong, one that will support you—our citizens—during your stay here.”

The final speaker was His Excellency David W. Panuelo, President of the FSM.

“The Pacific Northwest is the true embodiment of our people-to-people relations that reflects the very true spirit of partnership, and the enduring relationship, between the FSM and the United States,” President Panuelo said, repeating many of his core values and goals for his administration.

Among these include that the President is “your public servant”; the status of the FSM’s COFA and sovereign Trust Funds; the present status of COFA negotiations; the Nation’s enduring commitment to tackle the existential threat of climate change; the Nation’s renewed commitment to becoming an exemplar of governmental transparency and accountability; and more, such as the outcomes of the 50th Pacific Islands Forum.

Dominant throughout the President’s remarks was the closeness between the FSM and the United States, which is the Nation’s first and foremost ally. The President noted that approximately 40,000-50,000 citizens of the FSM live throughout the United States mainland and its territories, and advocated for adding a Special Polling Place in Portland. “Speaker was right that we need to add Portland, maybe Kansas City, and a few more cities where there is a concentration of our citizens…because you as a citizen of the FSM have the right to directly participate in voting, because that’s how you join our Nation-building process,” the President said.

“I thank the FSM community here in the Pacific Northwest for the beautiful exhibition of our cultures, our traditions, and I thank you all for being good citizens…. We appreciate all the things that you do in this country, and ask that you please do [always] give it your best so we can be true participants in this great nation, the United States,” President Panuelo continued. “God bless the people of the FSM, and God bless the people of the United States, and our enduring partnership. Thank you.”

After the formal remarks were concluded, groups representing each of the states performed various dances. FSM Information Services captured several of them, which are available here: https://www.youtube.com/channel/UC0hzzx7aaCHZbUGPr9-tLxQ/videos