His Excellency David W. Panuelo Informs the Honorable Lourdes Leon Guerrero: “I would welcome Guam to be an observer in the Compact negotiations” 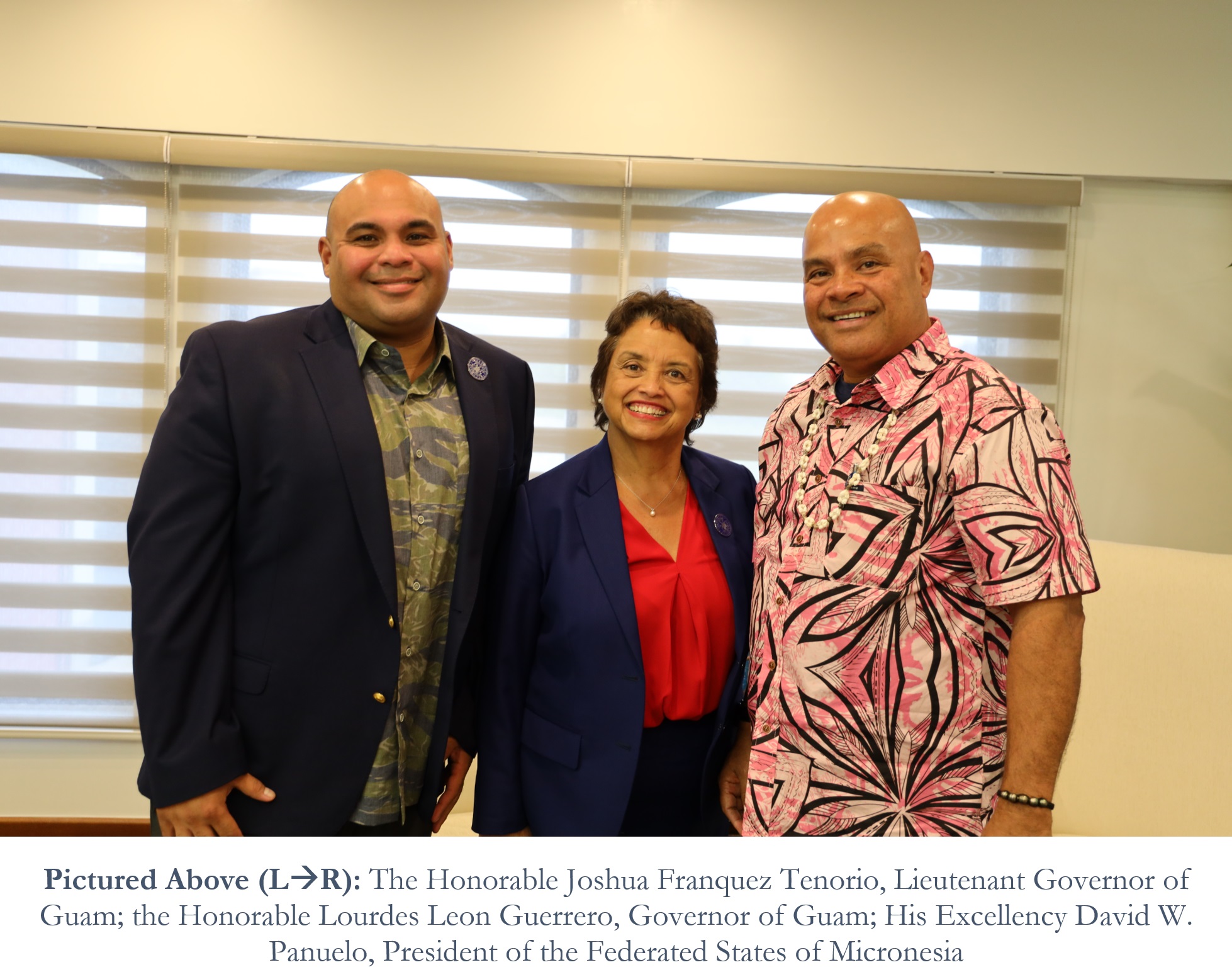 His Excellency David W. Panuelo Informs the Honorable Lourdes Leon Guerrero: “I would welcome Guam to be an observer in the Compact negotiations”

HAGÅTÑA, GUAM—On September 4th, 2019, His Excellency David W. Panuelo, President of the Federated States of Micronesia (FSM), was received by the Honorable Lourdes Leon Guerrero, Governor of the U.S. Territory of Guam, and the Honorable Joshua Franquez Tenorio, Lieutenant Governor, in a courtesy call. The purpose of the meeting was for the President to update its Micronesian neighbor on regional issues, and to respond to the Governor’s request that Guam be able to observe the upcoming negotiations on the Compact of Free Association between the FSM and the United States. The President was clear that, while the decision may not be up to him personally, that he supports the idea of Guam—as well as the Commonwealth of the Northern Mariana Islands, and the U.S. State of Hawaii—joining FSM-U.S. Compact negotiations as observers with the capacity to inform the Governments of the FSM and the United States their views on issues of import.

“Governor, I thank you—I want to thank you so much. Having known you and having met you in a professional capacity at the Micronesian Islands Forum, I find you to be very kind, very sincere, and forthright. I have every confidence that you’re representing everyone in Guam, including the 10% of your population that are from the Freely Associated States,” President Panuelo said. “You’re doing really good so far.”

“I’ve been working very closely with [the Consul General of the FSM], who has been very responsive. Since a lot of the Freely Associated States do have a significant impact here…I wrote Secretary [the Honorable Mike] Pompeo about the [Compact] negotiations,” said Governor Guerrero. “[I asked Secretary Pompeo if Guam] could be part of the negotiating team, as an observer.”

President Panuelo was clear that, in his view, the FSM must stand with its Micronesian neighbors, which includes sovereign nations such as the Republic of Palau and the Republic of the Marshall Islands, and also its regional allies within the United States, such as Guam.

“I would welcome Guam to be an observer in the Compact negotiations. It’s not my decision to make, I must say, but I think it will be healthy and show unity…because we have to deal with the Compact’s impact,” President Panuelo said, noting that the FSM community in Guam is both highly visible and highly contributory to the island’s development. The President also noted that the U.S. Government Accountability Office (GAO) will provide hard data demonstrating the FSM’s positive impacts in places like Guam, the CNMI, and Hawaii. “When I arrived in Guam, the person helping me with my rental car was [from the FSM], and the person manning the front desk at my hotel was [also from the FSM].”

“Sure, [FSM citizens] are part of the economy—and they contribute to the economy, and that’s important to point out,” Governor Leon Guerrero said.

The President noted that Guam is uniquely Micronesian and American, and as the United States is the Nation’s ally that it seemed reasonable that Guam—as well as the Commonwealth of the Northern Marianas Islands—would be able to provide perspectives that the FSM and U.S. National Governments might benefit from, noting that the Compact of Free Association, as Amended, is ultimately a treaty between two sovereign nations. The Joint Committee on Compact Review & Planning (JCRP), which negotiates on behalf of the FSM National Government, is comprised of members from all four FSM states precisely for the purpose of ensuring multiple perspectives are shared and heard, but the FSM and its States negotiate together as one entity.

President Panuelo, Governor Leon Guerrero, and Lieutenant Governor Tenorio also spoke about several other topics of mutual interest, such as the upcoming United Nations General Assembly and the urgent need for Pacific Islands—whether they’re sovereign nations like the FSM, or states and territories of other nations—to speak about the urgent need for the global community to combat the existential threat of climate change. President Panuelo noted that it may be in Guam’s interest to join the Pacific Islands Forum (PIF) as an observer, like French Polynesia, as Guam shares many of the same challenges that other Pacific Islands do but can offer potentially unique perspectives in how to tackle said challenges.

Governor Leon Guerrero initially asked President Panuelo for a meeting when he had a brief layover in Guam on his way to the 50th PIF. While the President was unable to meet that request, the FSM National Government recognizes that the request for the courtesy call on September 4th was made on relatively short notice, and that the Government of Guam was responsive and very genuinely accommodating. The FSM National Government extends its appreciation to the people and Government of Guam for their friendship and hospitality, and endeavors to ensure that the FSM’s relationship with Guam, like the FSM’s relationship with the rest of the United States, is based on mutual respect and shared values in the promotion and execution of programs that benefit the citizens of each.