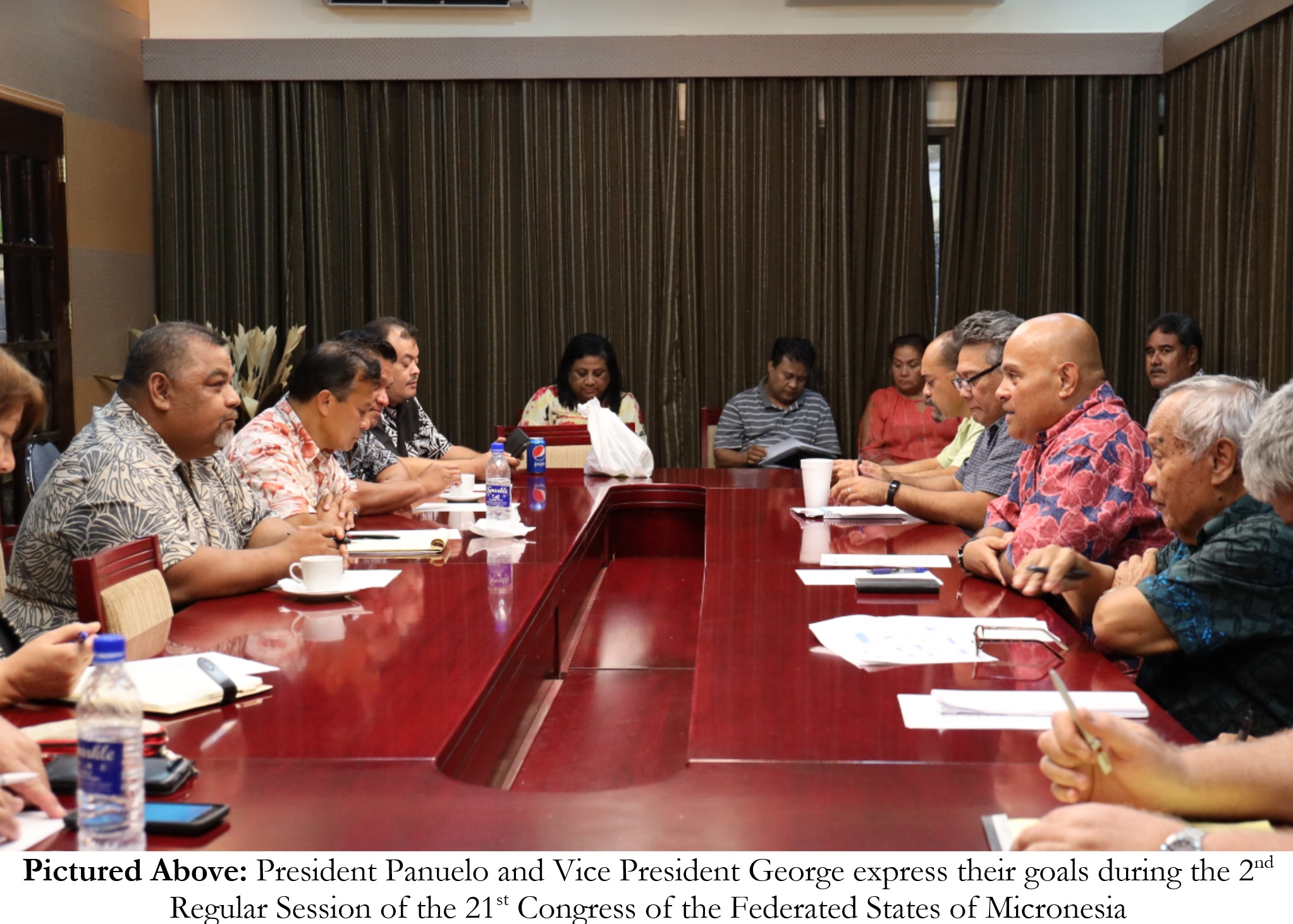 PALIKIR, Pohnpei—The 21st Congress of the Federated States of Micronesia (FSM) began its Second Regular Session on September 9th, 2019. After the opening session, His Excellency David W. Panuelo and the Honorable Yosiwo P. George received the Committee to Wait, chaired by the Honorable Robson U. Romolow, with committee members the Honorable Joseph J. Urusemal, the Honorable Aren B. Palik, the Honorable Esmond B. Moses, and the Honorable Ferny S. Perman, to discuss their agenda for this session of Congress.

The meeting began with the President informing the Committee to Wait on the outcomes of the 50th Pacific Islands Forum (PIF), and how the Joint Communique and Kainaki II Declaration on Urgent Climate Change Action Now will be brought to the United Nations later in the month. “I am scheduled to speak on the 26th [of September] as the 8th speaker in the afternoon, and so in my meeting with Speaker [the Honorable Wesley W. Simina] yesterday, I just wanted to say that we’ve agreed that I’ll extend an invitation to Congress to see if some of you can join,” the President said. “I think it’s always good that the Legislative Branch participate in as much as possible…and that’s going to be the ongoing policy, that I at least extend invitations to the Congress [for events of national import.]”

Both the appropriation request for the Constitutional Convention and the Fiscal Year (FY) 2020 budget were also discussed, with the President noting that there may be some minor additions and changes submitted, particularly with regards to personnel.

Beyond the agenda proper, two items garnered significant time and discussion: the need to improve benefits for Foreign Service Officers, and how to assist the FSM State of Yap with its ongoing outbreaks of dengue, leptospirosis, and foot and mouth disease.

The President—who has advocated for an aggressive foreign policy—noted that he appreciated the Congress’ adopted resolutions on the Government establishing embassies in the Swiss Confederation and Australia respectively, and advised that the FSM’s Mission to the United Nations and Department of Justice have been tasked to complete a fact-finding mission to Geneva to “meet with officials and get first-hand information.” In turn, the President called to attention that, in addition to the need for more Foreign Service Officers in FSM Consulate Offices abroad, foreign service personnel are in urgent need of additional support.

“I was in Guam,” the President said, “and the staff…do all of this overtime work that isn’t compensated for, and meanwhile they cannot make ends meet.” The President cited examples of foreign service personnel in Washington, D.C., Portland, Oregon, Honolulu, Hawaii, and Guam who simultaneously demonstrate commitment to going above and beyond the call of duty in service to the citizens of the Nation whilst also very nearly qualifying for the U.S. poverty-line in acquiring certain services. “I plan to submit something this session [to increase foreign service premium],” the President said, “and I will do some emergency regulations within the parameters [of the law and the powers of the Executive Branch] to review [foreign service compensation].”

“On the issue of the outbreaks in Yap,” the President said, “I’m advised that the Yap State Department of Health has reached out to the FSM Department of Health & Social Affairs, and that through the Department of Foreign Affairs we’ve asked the U.S. [Centers for Disease Control] for assistance.” It was discussed that, while the FSM National Government and the FSM State of Kosrae have sent personnel to the FSM State of Yap to assist in containing and mitigating these outbreaks, that it may be beneficial to send more support in the short-term and augment the Nation’s means of preventing and containing outbreaks in the long-term. The President, as part of a supplemental budget request, is asking for $90,000 to support Yap State and the Nation in the outbreak of dengue fever.

The meeting concluded with President Panuelo and Vice President George re-emphasizing their commitment to foster an exemplary working relationship with the FSM Congress for the benefit of the Nation’s citizens.