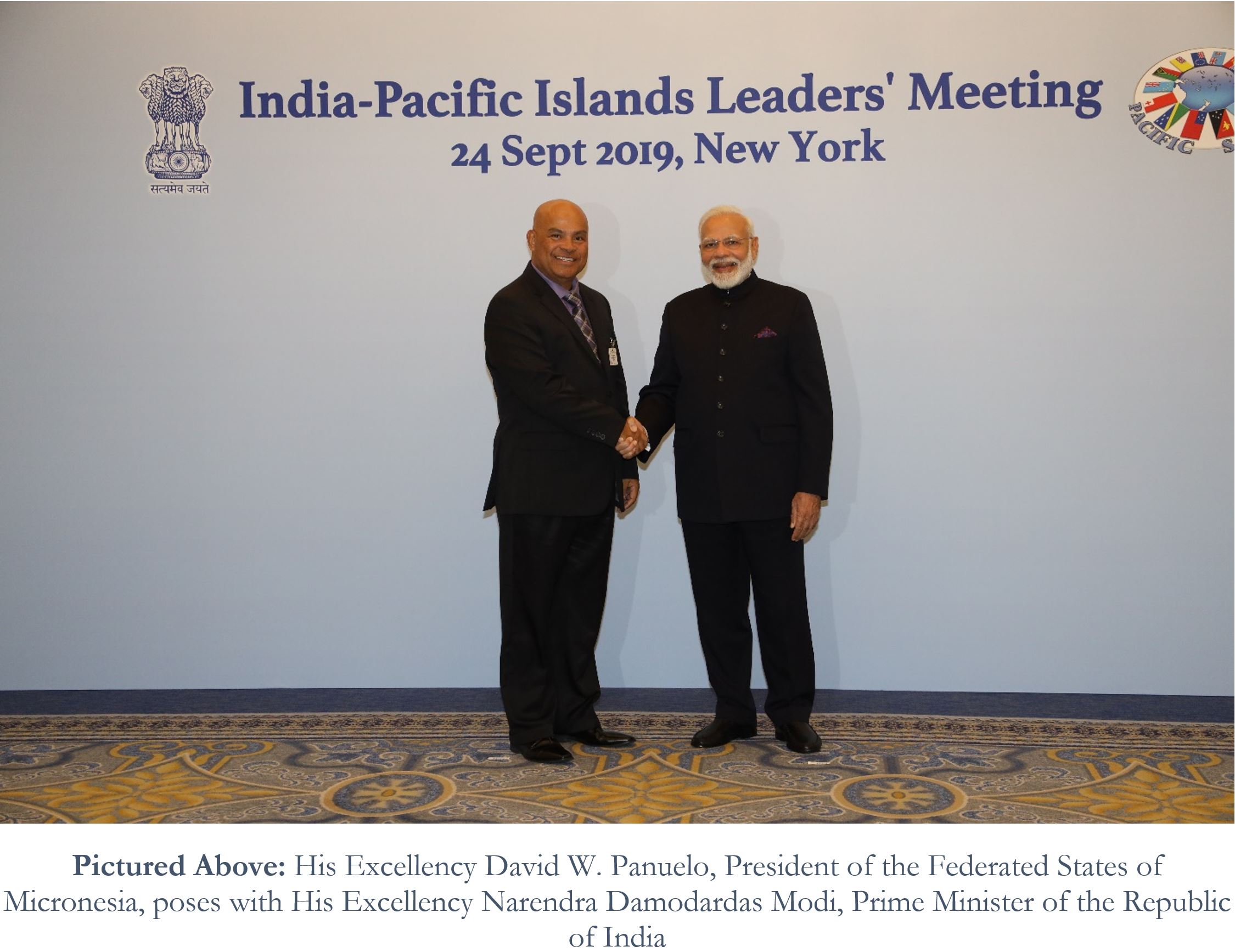 NEW YORK—On September 24th 2019, on the margins of the United Nations General Assembly (UNGA), His Excellency David W. Panuelo, President of the Federated States of Micronesia (FSM), joined other Pacific Island leaders in the India-Pacific Islands Developing States Leaders’ Meeting with His Excellency Narendra Damodardas Modi, Prime Minister of the Republic of India. One of the key outcomes of the meeting was the announcement that India will be providing one million dollars to each of the Pacific Island Developing States—including the FSM—to assist in meeting the 2030 Sustainable Development Agenda.

President Panuelo, who has advocated for aggressively building and enhancing new and existing partnerships with nations across the world as a key component of his administration’s goals, was quick to use the opportunity of the meeting to strengthen FSM-India relations.

“[FSM and other Pacific Islands] and India have established a robust and important partnership and cooperation that exists for our mutual benefit,” President Panuelo said. “We appreciate the support provided by your Government through South-South cooperation for the three projects that we currently have, and at the bilateral level that we have enjoyed since the establishment of our relations in November 1996. [India’s] funding will assist our country to meet the universal [2030] Sustainable Development Agenda.”

It was further emphasized that India’s assistance to the Pacific and the FSM through South-South cooperation is of great value to the Nation. This assistance includes the Climate Early Warning Systems in Pacific Islands Countries project, which improves the technical capacities of national meteorology and hydrology services, the Strengthening Micronesia’s National Gender Machinery to Mainstream Gender in National & State Programs project, which supports the participation of women across all levels of Government, and the Solarization of Head of State Residences project, which promotes the use of renewable energy via the installation of photovoltaic power at the residences of Heads of State. India has also supported the FSM on a bilateral level through the provision of financial support for coconut processing and agriculture surveys, among other kinds of assistance.

While President Panuelo described many areas of ongoing and potential development in FSM-India relations, perhaps the area of most immediate relevance and interest to citizens of the FSM was the request that India teach the FSM how they implement their own national elections. With well over one billion (1,000,000,000) citizens compared to the FSM’s approximately one hundred thousand (100,000), India is simultaneously the world’s largest democracy and renowned for ensuring every citizen is able to have their voice heard.

“One of the key pillars of my administration,” President Panuelo said, “is to focus on transparency and good governance. India, as we know, is the world’s biggest democracy—and we would be interested in learning more from your government on your electoral process and…[India’s] motto of leaving no voter behind.”

Prime Minister Modi—who appeared moved by the request—discussed in detail how, although India is very large, every person and their vote (i.e. their voice) matters. Prime Minister Modi described how there is a polling place deep in India’s forests, in a remote region where only a single person lives, and how the Government responded to ensure that the citizen was able to exercise their right to vote.

“Mr. Prime Minister, we thank you for hosting this meeting and [for strengthening] the friendship [between FSM and India] that has endured,” President Panuelo said.

While this FSM National Government Press Release primarily focuses on the components of the meeting of potentially most immediate interest to the Nation’s citizens, many other topics were discussed. Citizens interested in reading the outcomes of the meeting from India’s perspective are referred to India’s Ministry of External Affairs’ Press Release here: https://mea.gov.in/press-releases.htm?dtl/31854/Prime_Minister_meets_Pacific_Island_Leaders

The FSM National Government extends peace, friendship, cooperation, and love in our common humanity to the people and Government of India, and seeks to foster stronger and more visible partnership in the future.