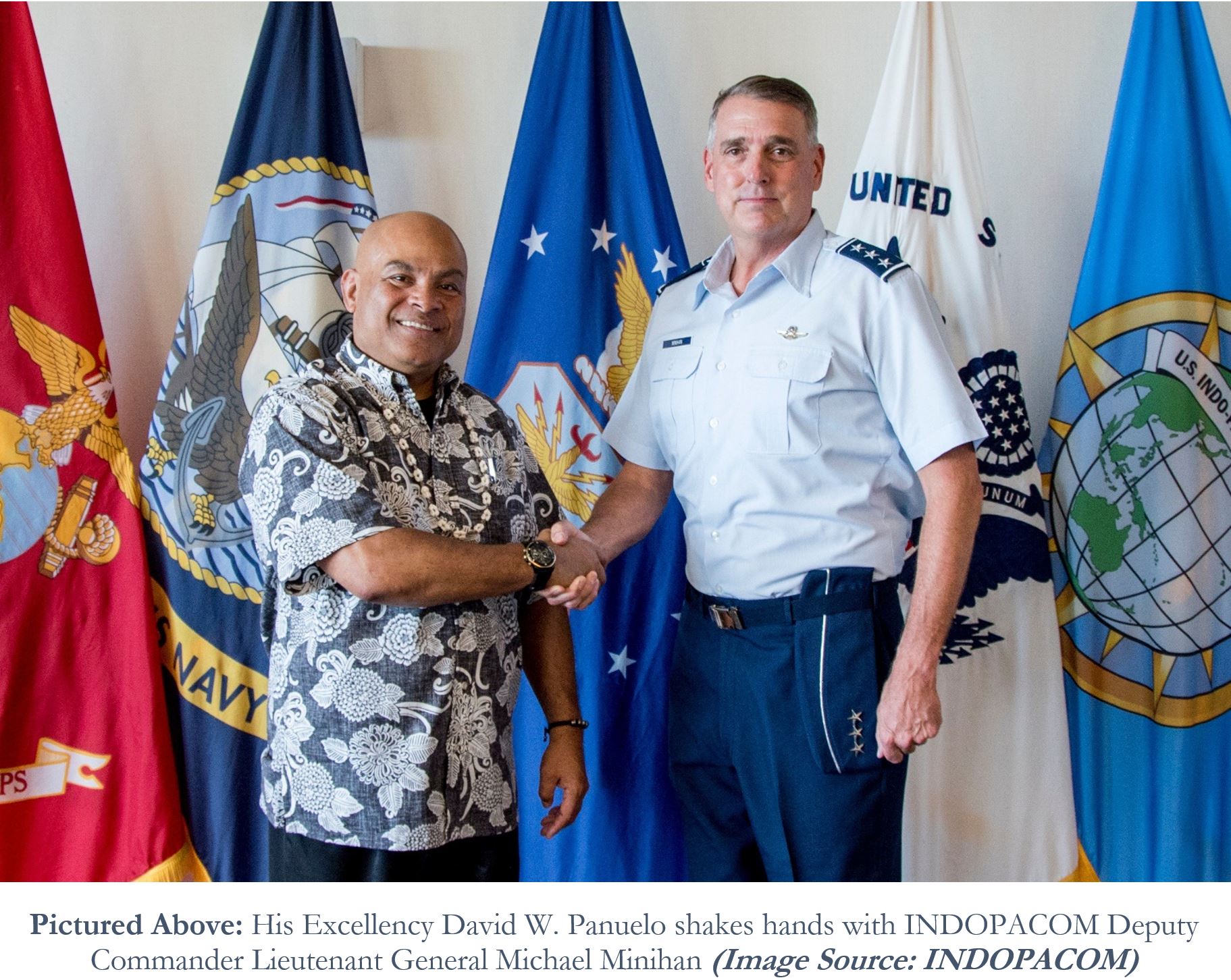 While the majority of the conversation focused on the United States’ commitment to a free and open Indo-Pacific, what that looks like in practice, and the status of geopolitical and environmental threats to the region, President Panuelo and Deputy Commander Minihan also spoke on broader topics that the public may wish to be informed about.

President Panuelo reiterated that the FSM’s enduring and perpetual partnership with the United States is first and foremost for the Nation’s foreign policy agenda, and advised his appreciation for the United States’ assistance to the FSM, both through its commitment to its obligations under Title 3 under the Compact of Free Association, as Amended, and through broader goodwill programming, such as to strengthen the Nation’s technical capacity. Examples of this assistance include continued U.S. Coast Guard support, specifically Search & Rescue operations; maritime security capacity building; port security assistance; the ship-rider agreement; the increased presence in the form of operations and exercises such as the Pacific Partnership, Pacific Pathways, and Koa Moana; and the extension and expansion of the Construction Civic Action Details (CCAD), among others.

Current project activities include the U.S.’ Underwater Construction Team assisting with the widening of channels in all four states in the Nation, with the widening of Sapwuahfik Atoll in Pohnpei State to be occurring in the next several weeks after some of the necessary background procedures (such as the EPA report) are completed. The next CCAD renovation projects in the pipeline are for Pehleng Elementary School and Roie Sokehs Pah Elementary School. The U.S. Armed Forces have confirmed that they will build or improve firing ranges in Pohnpei, Kosrae, and Yap to support training of the Nation’s law enforcement personnel. Twenty (20) law enforcement officers across the Nation will be receiving two weeks of training with the Federal Bureau of Investigation in Hawaii later this year. The salvage operations for MV Micro Dawn in Chuuk remain ongoing. Further, the Pacific Partnership, Pacific Pathways, and Koa Moana will all occur within the FSM in 2020.

Although President Panuelo was clear that the FSM National Government is sincerely appreciative of its enduring relationship with the United States, he also noted areas of potential improvement. Among these were a call for increased visibility of U.S. presence in the FSM, in part so that citizens unaware of or unaffected by certain programming can see the enduring relationship in action. The President also requested routine briefings on information relevant to the Nation’s security, ideally every six months and as needed.

Deputy Commander Minihan reiterated the promise that the United States will protect the FSM and its citizens as if they were part of the United States itself, and advised the President that he can receive briefings as frequently as he desires—to include the arrangement of regular briefings. It was noted that the defense attaché to the U.S. Embassy in Kolonia can also serve to implement or augment these activities.

The mission of INDOPACOM is to protect and defend, in concert with other U.S. Government agencies, the territory of the United States, its people, and its interests. Through the Compact of Free Association, as Amended, the United States is responsible for the FSM’s defense. The next Joint Committee Meeting (JCM), where the FSM and the U.S. discuss defense issues, will occur in November 2019 in Palikir, Pohnpei.

We have 1457 guests and no members online