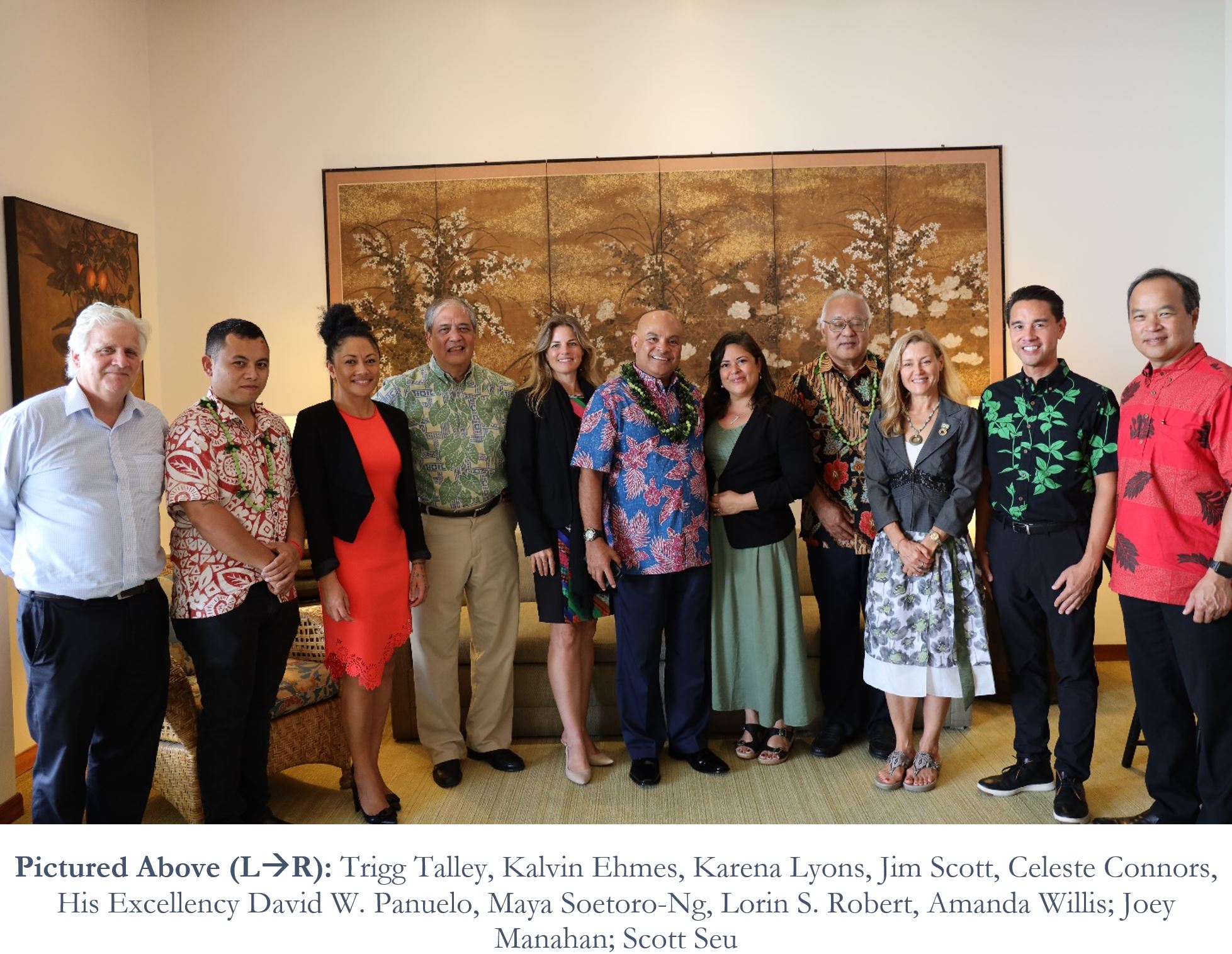 HONOLULU—On October 3rd, 2019 His Excellency David W. Panuelo, President of the Federated States of Micronesia (FSM), met with representatives of Hawai’i Green Growth United Nations Local2030 Hub, inclusive of stakeholders in Hawaii’s academic, public, and private sectors. The purpose of the meeting was to develop, expand, and strengthen the Nation’s partnerships that promote the FSM’s Sustainable Development Goals (SDGs) in areas ranging from environmental stewardship to community empowerment.

The meeting began with the President describing his administration’s goals and recent activities, but quickly worked towards the primary topic of how island solidarity and island leadership are essential for tackling the existential threat of climate change. “We can talk about a lot of things, but overall the Pacific Island countries are advocating that the strongest position we can all take is to move forward with the Paris Agreement,” President Panuelo said. “We’re all singing the same song together on this one.”

“We agree that this island worldview is really…what will help folks deliver on the [SDGs],” said Celeste Connors, Executive Director of Hawai’i Green Growth, noting that environmental stewardship is an all-encompassing idea that ranges from the protection of oceans to the use of renewable energy. “In Hawaii, we were very much inspired by Micronesia…the Micronesia Challenge inspired the Aloha+Challenge. It’s island leaders inspiring other island leaders, and it’s island leaders that will lead our island Earth.”

“So, we have other partners saying: how do we integrate sustainability and climate and have an open data platform to measure progress…and how do we appropriate indicators and metrics that are defined by the local community?” Executive Director Connors said, describing how implementing, measuring, and tracking local solutions empowers communities and can translate to solutions across other parts of the world. “Islands have a real leadership role—so we invite you and [U.S. Senator Brian Schatz] to join the network which now includes Ireland, Seychelles, and Grenada....”

The conversation broached many subjects on climate change analysis and action, and how all the various layers of society and economy are interlinked.

Trigg Talley, Senior Advisor to Hawai’i Green Growth, noted that there is a huge linkage and integration between what happens in climate and what happens in terms of the SDGs more broadly.

Joey Manahan, member of the Honolulu City Council, described how tapping and engaging the Micronesian community in Hawaii is important to the City of Honolulu’s success and the broader success of Hawaii.

Scott Seu, Senior Vice President of Public Affairs at Hawaiian Electric Company, described how meeting Hawaii’s goal of 100% renewable energy use by 2045 starts with, and requires, local communities informing Hawaii Electric’s plans (as opposed to the company telling the communities what it will be doing and having that be the end of it).

Dr. James Scott, Chair of the Board for East-West Center, advised that he was heartened by President Panuelo’s optimism in American democracy and emphasized that educating children for a sustainable future is vital.

Amanda Ellis, Executive Director, Hawaii and Asia-Pacific and Director of Strategic Partnerships for the Julie Ann Wrigley Global Institute of Sustainability at Arizona State University, described her appreciation for the leadership of island governments, emphasizing that significant breakthroughs such as the Paris Agreement are the result of such leadership.

Maya Soetoro-Ng, sister of former U.S. President Barack H. Obama and Advisor to the Obama Foundation, described how the Obama Foundation’s Asia-Pacific Leaders program seeks deeply ethical and collaborative young leaders with a commitment to the region so as to mentor and support them.

“In terms of this group and our working together,” President Panuelo said in his closing remarks, “I really hope that this is the beginning. We always pass through Hawaii as a hub to reach other parts of the world—so if there’s a way that we can get together to share experiences and support each other…[the FSM National Government] would appreciate connecting with you.”

The FSM National Government is proud to begin its partnership with Hawai’i Green Growth and its network of academic, public, and private sector stakeholders.

We have 723 guests and no members online