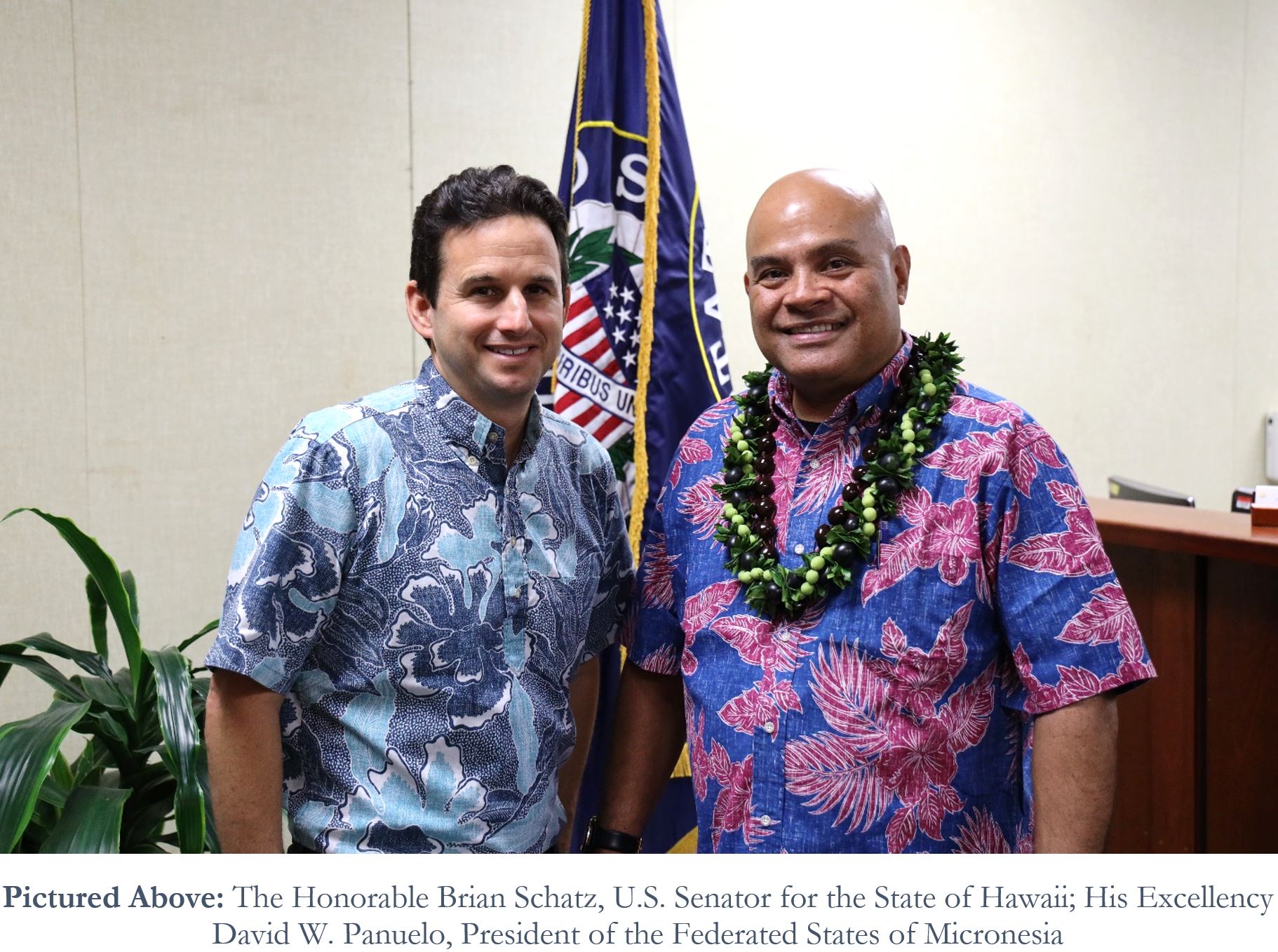 HONOLULU—On October 3rd, 2019 His Excellency David W. Panuelo, President of the Federated States of Micronesia, was received by the Honorable Brian Schatz, Senator for the U.S. State of Hawaii to the Congress of the United States in a courtesy call. The President thanked Senator Schatz for his continued support to the FSM and its citizens, and urged his support on the upcoming negotiations on the expiring provisions of the Compact of Free Association, as Amended, climate change, and the COFA Veterans Review Bill.

“Thank you, Senator, for setting aside your busy time,” President Panuelo began. The President described the FSM’s commitment to tackling the existential threat of climate change, including its recent partnership with the Blue Prosperity Coalition to protect 30% of the Nation’s exclusive economic zone (EEZ) by 2030. “Sustainability is for the longterm future of everybody, not just our country…I know Hawaii is strong in terms of being friendly with the environment and I thank you for being one of the stronger supporters of climate change. We need more of you.”

Senator Schatz reassured President Panuelo that he is dedicated towards promoting environmentally and economically sustainable policies, and then asked “What are the worst impacts [of climate change in the FSM]? Is it coastal inundation?”

“In some of our small islands…we have king tides; salt water intrusion into our taro patches, our drinking wells,” President Panuelo said, noting that many citizens of the FSM migrate away from their home islands, with environmental hardships being one potential reason for such migration. “I’d say forty thousand plus of our citizens are scattered across the U.S. to some extent.”

Senator Schatz was quick to point out that he intends to ensure Micronesians feel welcome in Hawaii and the rest of the United States. “Hawaii has a proud history of being able to accept, blend in with, and welcome everybody. …Anything I can do to make sure that everybody understands that the Government of the State of Hawaii is supportive of immigrants generally, including our brothers and sisters from the FSM and throughout the Pacific—I just think it’s worth saying over and over again. …Anything I can do along those lines I want to do.”

The subject then turned to the COFA Veterans Review Act, which the Honorable Lisa Murkowski is championing in the U.S. Senate and the Honorable Don Young is championing in the U.S. House of Representatives. President Panuelo asked Senator Schatz for his support. The COFA Veterans Review Act would provide essential healthcare services that citizens of the FSM who served honorably in the U.S. Armed Forces have already earned but are unable to access while in the FSM.

“We can follow up on that,” Senator Schatz said.

President Panuelo again thanked Senator Schatz for his time and for his friendship to the people and Government of the FSM.