President Panuelo Thanks Governor Herbert for Utah’s Friendship to the FSM; Asks for Further Economic Cooperation & List of Recommendations for an Honorary Consul 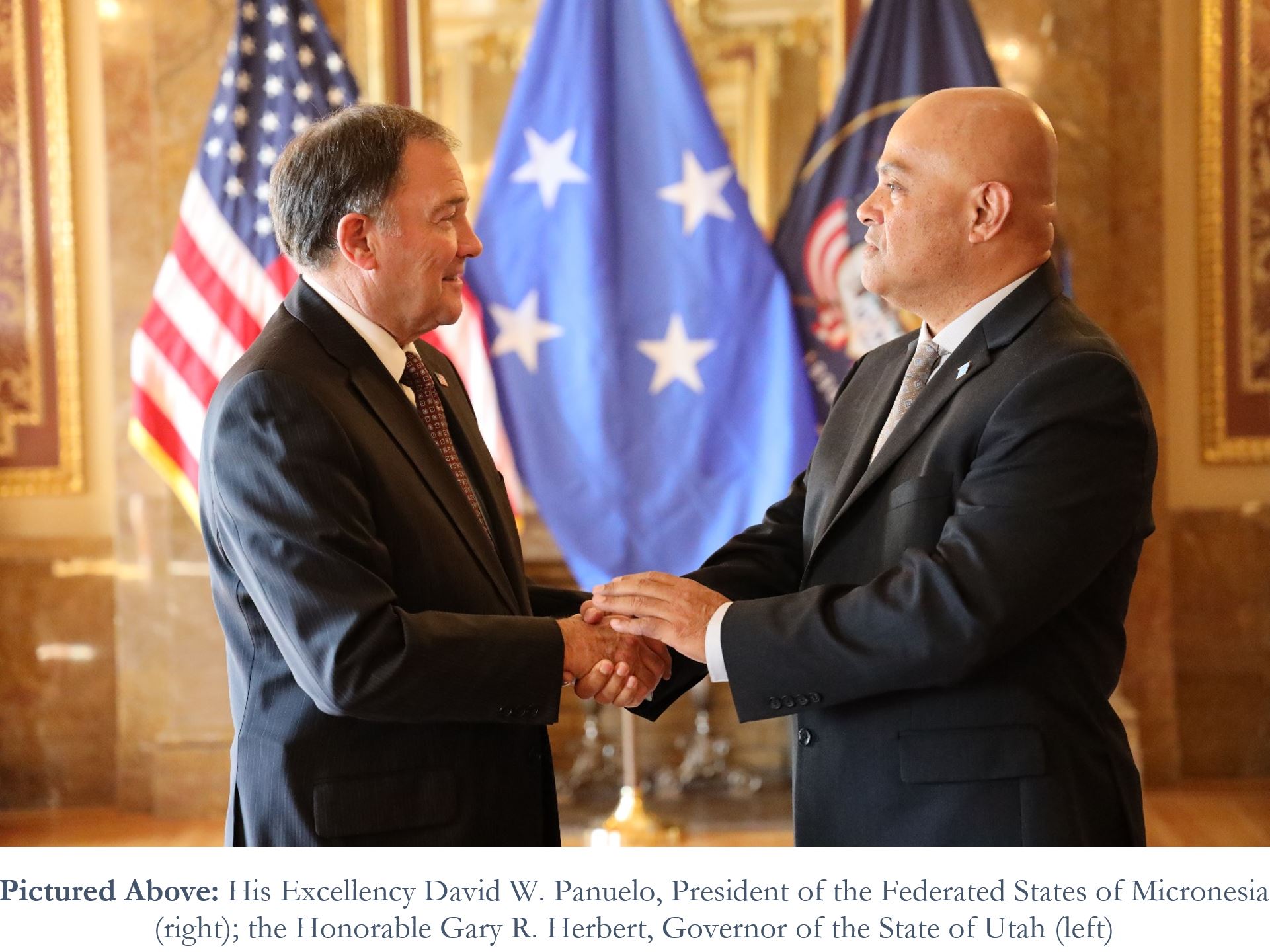 President Panuelo Thanks Governor Herbert for Utah’s Friendship to the FSM; Asks for Further Economic Cooperation & List of Recommendations for an Honorary Consul

SALT LAKE CITY, Utah—On October 8th, 2019, His Excellency David W. Panuelo, President of the Federated States of Micronesia (FSM), was received by the Honorable Gary R. Herbert, Governor of the U.S. State of Utah. The purpose of the meeting was to thank the State of Utah for hosting a growing community of FSM citizens that live, work, and worship in Utah, to field the Governor’s advice on economic development, and to request a list of recommendations of potential citizens who could serve as an Honorary Consul of the FSM. Joining the meeting were the Honorable Joe Enlet, Consul General of the FSM based in Portland, Oregon, and the Honorable Karen Kwan, Member of the Utah State House of Representatives.

“Tell me about Micronesia, how things are going there, and what we can do to help assist you in your needs and desires,” Governor Herbert began.

President Panuelo described the FSM’s history, demographics, and economy, noting that as of October 2019 the citizens of the Nation are concerned about economic opportunities, improving the education and healthcare sectors, and combatting the existential threat of climate change, among others. The President also described how he arrived in Utah due to an invitation from the Church of Jesus Christ of Latter-day Saints to speak at the International Law & Religion Symposium, which he described as a huge honor and as “a kind of mini United Nations.”

President Panuelo emphasized that the rule of law is paramount to a society’s cohesion and success, and that by extension the freedom of religion is of equal importance. Governor Herbert described how, though approximately two thirds of Utah belong to the Church of Jesus Christ of Latter-day Saints, inclusivity and the welcoming of all people—regardless of religious affiliation or lack thereof, ethnicity, gender, et cetera—is the norm in Utah, including Pacific Islanders and including Micronesians in particular.

“We have many of our citizens living here….thank you for hosting them, for being a good host to our Pacific Island community from the FSM,” President Panuelo said, discussing how through the Compact of Free Association citizens of the FSM are eligible to live and work in the United States as legal non-immigrants. “That’s why we’ve established [Consul General] Joe Enlet in Portland, because we have citizens in the Pacific Northwest. We also have citizens here.”

President Panuelo described how, in a previous meeting between the Government of Utah and the Government of the FSM via Consul General Enlet, Utah had offered to provide a list of recommendations for a potential Honorary Consul to the FSM based in Utah.

President Paneulo formally requested such a list of recommendations, noting that he looks forward to receiving it and appointing an Honorary Consul as soon as possible.

Governor Herbert then described the international relevance of Utah, noting that 130 languages are spoken in the state and how, within his own family, individuals may know Chinese, Norwegian, Spanish, and Romanian.

“You have an international family!” said President Panuelo.

“That’s not unique; that’s just kind of Utah…which allows us to engage with the world on many levels, particularly on economic growth and strength in our economy, and doing a lot of international business,” Governor Herbert replied, describing in detail how Utah has the healthiest middle class in the United States, the lowest income inequality, the highest rates of citizen volunteerism and charitability, and a vibrant economy across virtually all sectors—from tourism to manufacturing, and mining to banking.

President Panuelo, referencing his administration’s overall strategy of developing, maintaining, and strengthening relationships in all sectors and with all peoples, asked Governor Herbert for Utah’s assistance in exploring possible economic cooperation with mutual benefits to the people of Utah and the people of the FSM. “I look forward to working with you, Governor. You have wisdom and experience, and any guidance…[you can give on economic development prospects] would be appreciated.”

Governor Herbert remarked that, amongst all the accomplishments Utah has made, they’re all because of its people. “You name it, we’re doing something and over the last ten years we’re doing it better now today…and that major success is because…we have good people.”

“The people are the extension of our success,” President Panuelo said.

The meeting concluded with President Panuelo extending a standing invitation—“whether you are in your capacity as Governor or not”—to Governor Herbert to visit the FSM.

Shortly after the meeting’s conclusion, the President directed his staff to explore and develop proposals on how the FSM can move forward with economic, cultural, and other partnerships with the State of Utah.