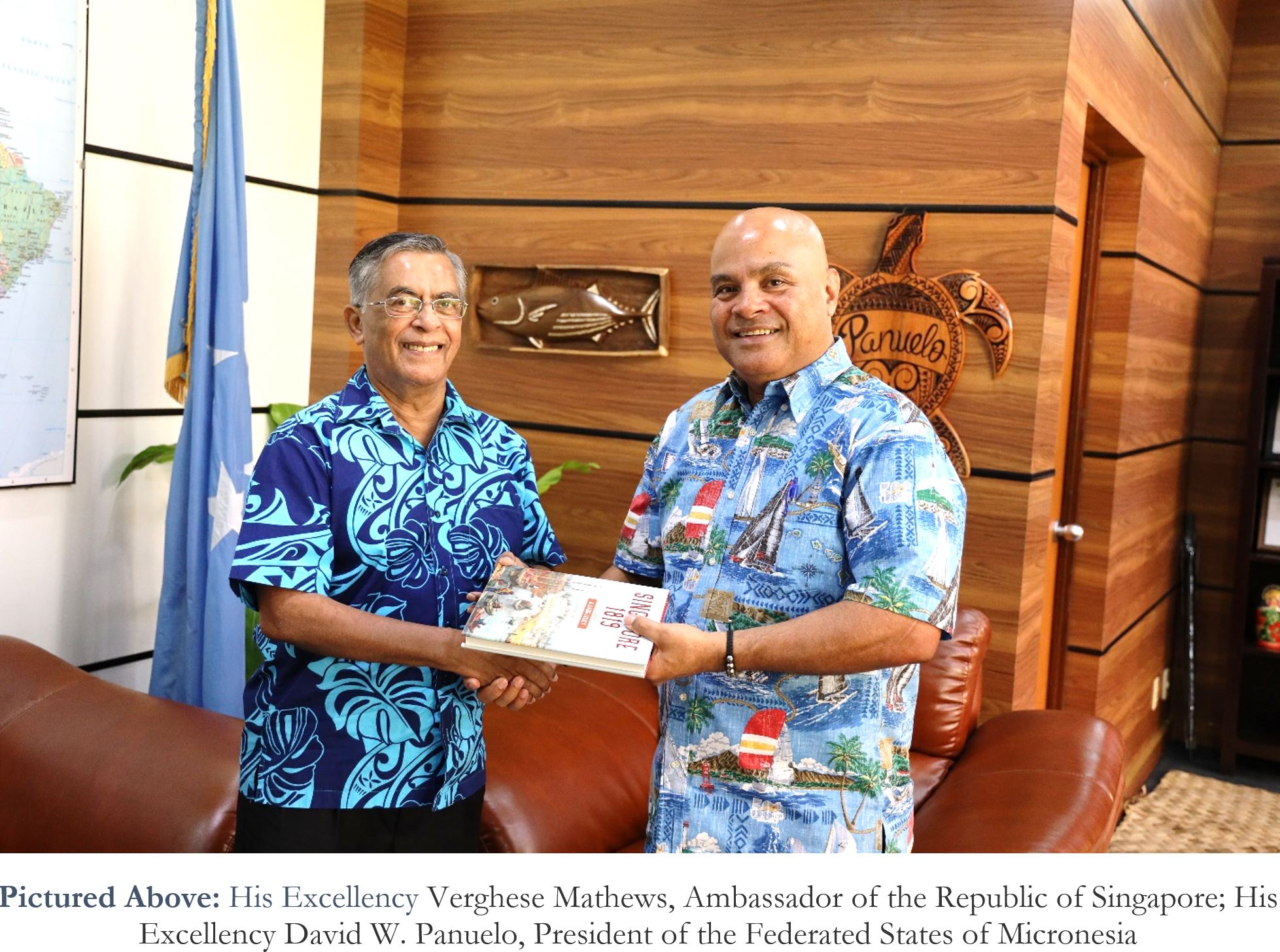 PALIKIR, Pohnpei—On October 31st, 2019 His Excellency David W. Panuelo, President of the Federated States of Micronesia (FSM) received His Excellency Verghese Mathews, Ambassador of the Republic of Singapore, in a courtesy call. While the meeting covered many topics, perhaps the topic of most relevance to citizens of the FSM was the President’s request for Singapore’s assistance in providing vocational training opportunities and curriculum development for a proposed regional vocational education center.

“Ambassador—we are of course very delighted to welcome you here,” President Panuelo began, describing the Nation’s goal to revitalize its own capacity-building capabilities, particularly in the area of vocational education. “We’re exploring reviving [Pohnpei Agriculture & Trade School] as a regional institution across Micronesia, because our youth need to be trained in-country with skills for our internal development.”

“I know that Singapore,” President Panuelo continued, “has come from very humble beginnings, and turned into one of the leading countries in Asia, if not the world. Right now [in the FSM], we still hire people from overseas who have technical skills—and we want to be able to change that, where our people can develop their skills internally at home.”

Ambassador Mathews thanked the President for the Nation’s support for Singapore’s candidatures to the International Civil Aviation Organization (ICAO) and the International Maritime Organization (IMO), and then described Singapore’s growth as an independent republic, and how investing in its own human resources was necessary for the country’s economic development. “We’ll be interested in helping [the FSM with training],” the Ambassador said. “In 1992, we started the Singapore Cooperation Program, it specializes in training. From 1992 until today, we have trained about 128,000 people.”

The Ambassador advised that approximately 110 citizens of the FSM are included in that group of 128,000 individuals who have received training, and noted that Singapore is keen to increase that number.

“The training is for officials, but we do train the trainers as well,” Ambassador Mathews said, noting that Singapore will look into how it can offer vocational education training of trainers after it receives a formal proposal and request from the FSM National Government.

President Panuelo noted that the FSM National Government is actively pursuing and developing its plan to create a world-class regional vocational education institution, and that a Training of Trainers provided by Singapore would be ideal to ensure the institution’s success.

The meeting ended on a positive note, with President Panuelo and Ambassador Mathews reaffirming the close friendship between the FSM and Singapore.