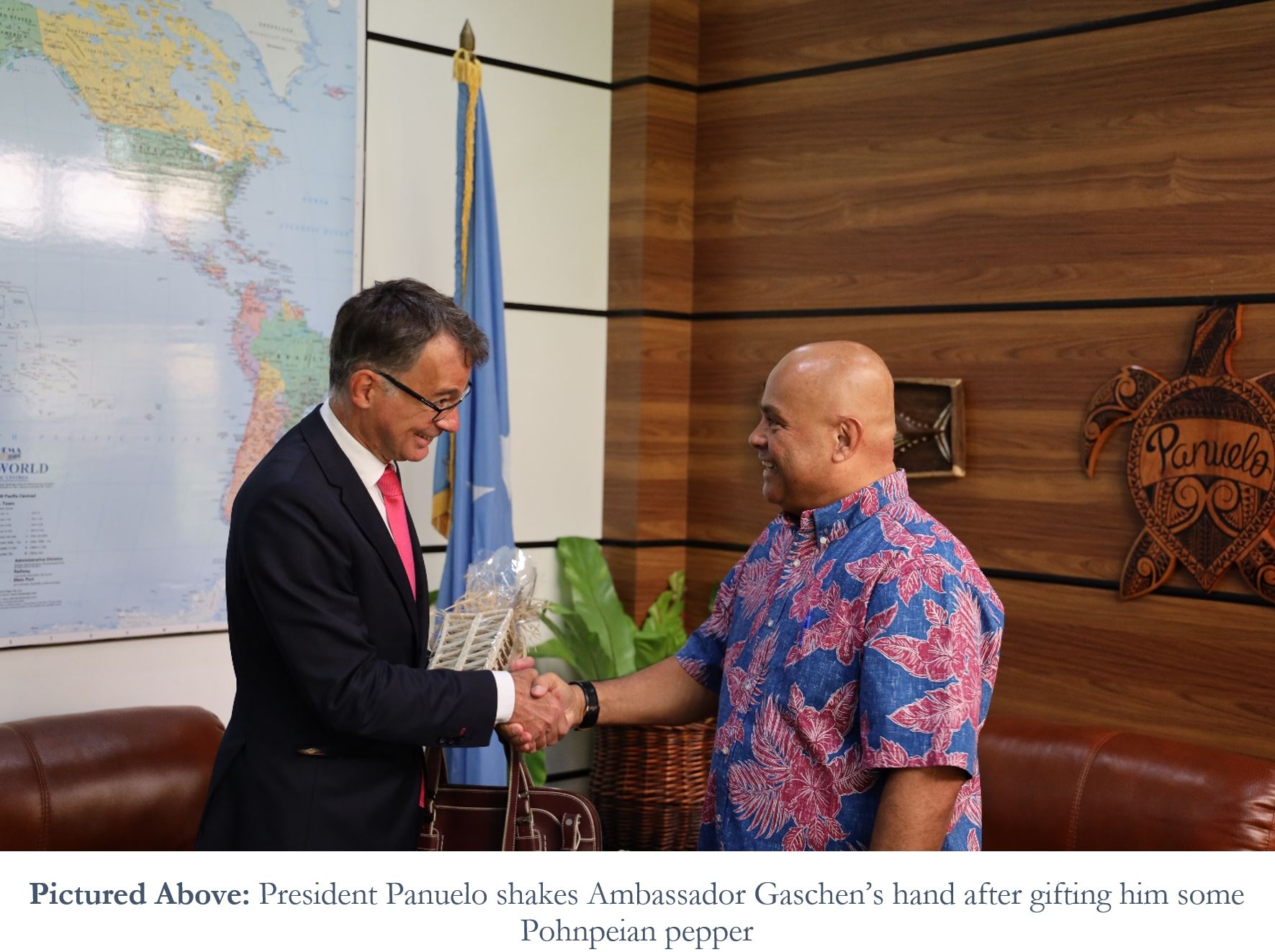 PALIKIR, Pohnpei—On November 5th, 2019 His Excellency David W. Panuelo, President of the Federated States of Micronesia (FSM), received His Excellency Alain Gaschen, Ambassador of the Swiss Confederation (Switzerland), who presented his credentials to serve as the official representative of Switzerland to the FSM. Following the presentation of credentials was a courtesy call, with the primary topics of conversation focusing on the promotion of peace and sustainable living, as well as the FSM’s anticipated opening of an Embassy in Switzerland.

“Our Government is very proud to receive you,” President Panuelo began. “We do appreciate the role that Switzerland plays in the world community. Yours is a country that is neutral, with lots of integrity and respect for human rights, the rule of law, and promoting peace internationally.”

“We appreciate countries, including yours, that are declaring to be carbon free by 2050,” President Panuelo continued. “We look forward to a very close working relationship with you.”

“We look forward to supporting your endeavors in seeking a seat for the UN Security Council,” President Panuelo replied. “You’re a peace-loving country, we know that, and we respect that.”

The President emphasized his appreciation for Switzerland’s offer to provide financial and technical assistance with setting up an Embassy of the FSM in Geneva, particularly since the Embassy would be able to serve multiple roles. Such an Embassy would be accredited to Switzerland (and thus Switzerland would become the first country in Europe with an Embassy of the FSM there), it would be able to serve the FSM’s interests in engaging the United Nations in Europe, and it would also seek cross-accreditation to the European Union Headquarters in Brussels, Belgium, with the overall goal of building and enhancing the Nation’s relationships with Governments and Non-Government Organizations.

The FSM delegation to the 50th Pacific Islands Forum (PIF) in the Republic of Tuvalu met with a representative of Switzerland to discuss the possibility of an FSM Embassy in the country. After the 50th PIF, President Panuelo instructed staff from the FSM Department of Foreign Affairs and the FSM Department of Justice to complete a fact-finding mission, which was completed in September.