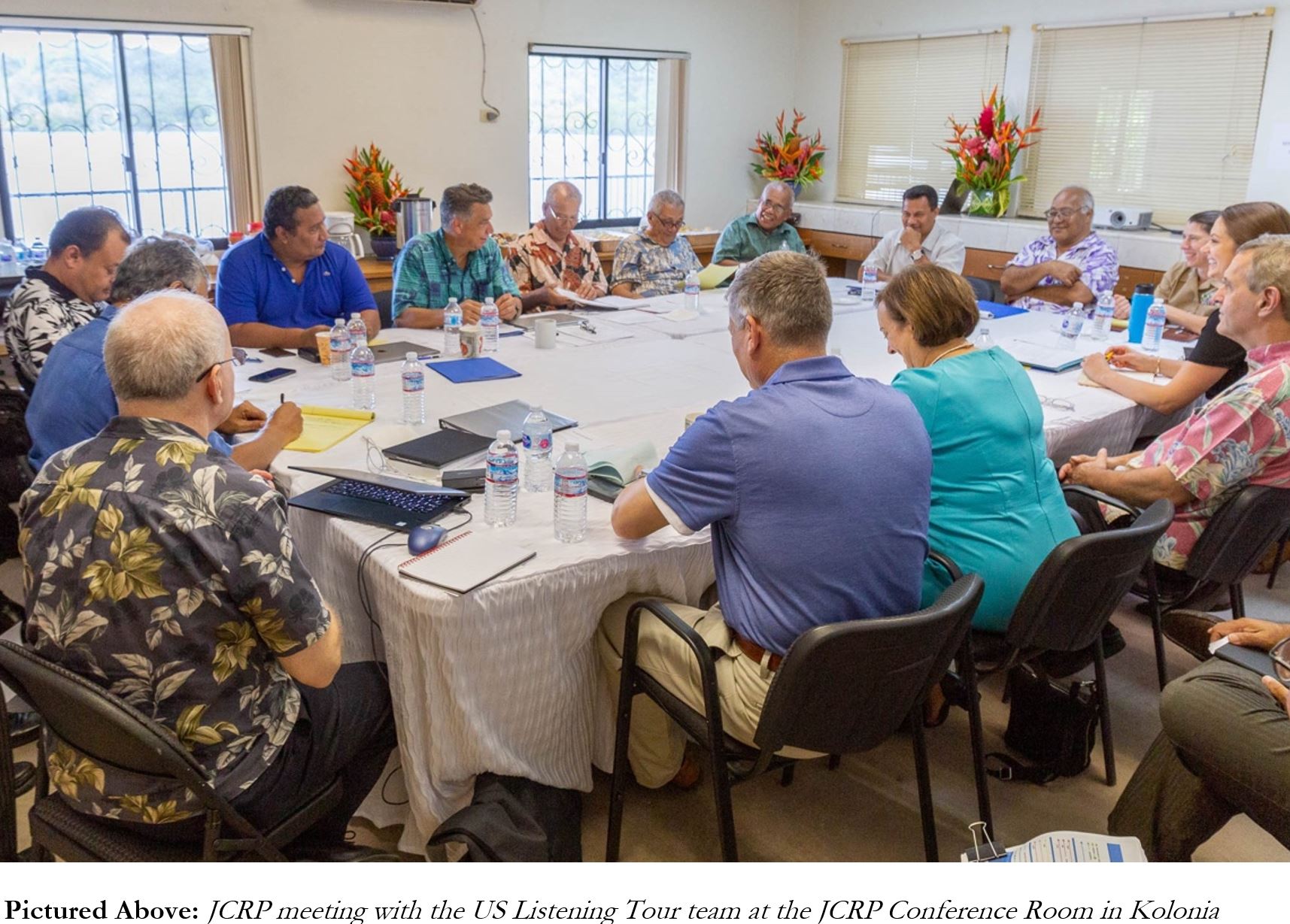 KOLONIA, Pohnpei—The Joint Committee on Compact Review and Planning (JCRP) was visited by a team from the United States Government Interagency Group preparing for the negotiations on the amended Compact and held a meeting on November 1, 2019 to hear from the JCRP what has worked and what has not under the current terms of the amended Compact of Free Association. The Compact of Free Association was signed by the U.S. and FSM in 1986 and further amended in 2003. The visit to the FSM was similar to those made earlier to the Republic of Palau and the Republic of the Marshall Islands.

While the meeting was not a formal opening of the negotiations on the amended Compact, the visit came about two months after the U.S. Secretary of State, Michael R. Pompeo, announced while visiting His Excellency David W. Panuelo, President of the FSM, in Pohnpei that the U.S. was prepared to open talks to extend those provisions.

The meeting opened in the morning with welcoming remarks by Chairman Takesy, who not only welcomed the delegation but also thanked them for the opportunity to exchange views in preparation for the upcoming more formal talks. The Chairman traced the history of the special relationship shared by the two nations and the path that has led to the current Compact arrangement. He stressed the importance of the Compact and the much-needed U.S. assistance and also noted that the Compact relationship should evolve as necessary to reflect new realities and new challenges, such as that posed to the FSM by issues such as climate change.

Ms. Lawrence stressed the rich shared history and values of the two nations and how these common characteristics has led to deep and lasting bonds reflected in the amended Compact relationship. She highlighted the renewed U.S. focus on the Indo-Pacific region demonstrated by the recent visit of Secretary Pompeo to the FSM.

In the afternoon, the meeting was devoted to discussions with the National Government executive departments, offices and agencies concerning the work in their sectors that is made possible because of U.S. Compact funding. The meeting afforded an opportunity for the team to meet the individuals in the FSM national government who will be implementing the new agreement and provided an overview of efforts underway to augment the assistance the FSM receives under the Compact with other sources of revenue and assistance.

Chief Negotiator Falcam concluded the meeting by thanking the team for a constructive session and an excellent start to a process that will continue into 2020. He also expressed the appreciation of the FSM team for Ms. Lawrence’s leadership and her commitment to the U.S.-FSM relationship through these talks on the expiring provisions of the Compact. Chief Falcam noted that the FSM is keenly interested in keeping the discussion moving as quickly as possible to achieve Secretary Pompeo’s commitment to address the expiring provisions of the amended Compact well in advance of FY 2023, noting that the process would be lengthy on both sides. He, therefore, recommended aiming for a technical working session between the two governments early next year at the latest.

Ms. Lawrence agreed on the importance of making progress, stating that her team would work to arrange technical discussions as soon as possible to move the process forward.

Upon arrival of the Listening Tour team in Pohnpei on October 31, the team paid courtesy calls on His Excellency David W. Panuelo, President of the Federated States of Micronesia, and Vice-Speaker Moses. The team departed Pohnpei on Saturday, November 2, 2019.