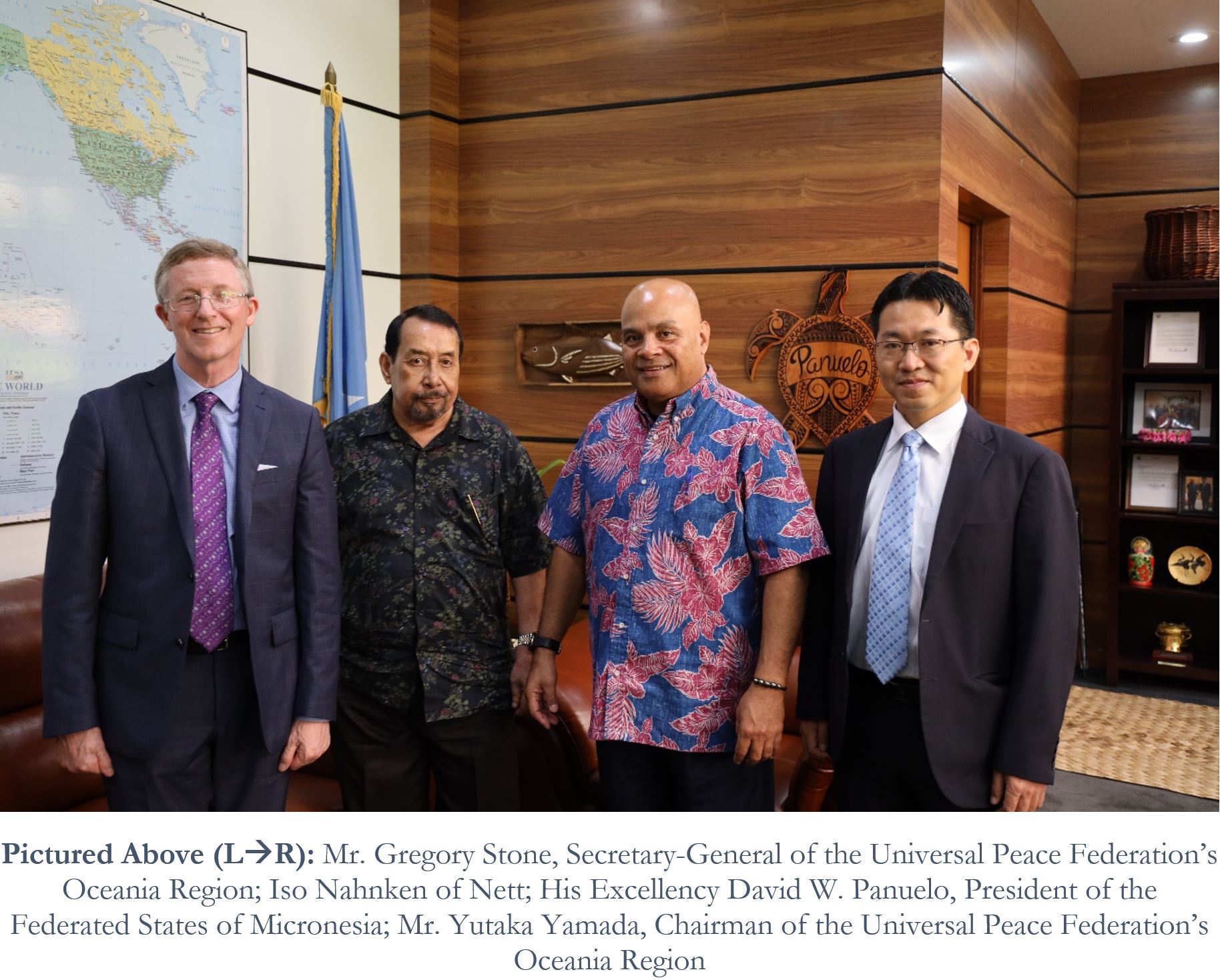 PALIKIR, Pohnpei—On November 5th, 2019, His Excellency David W. Panuelo, President of the Federated States of Micronesia (FSM), received Iso Nahnken of Nett, who accompanied Mr. Gregory Stone and Mr. Yukata Yamada, Secretary-General and Chairman of the Oceania Region respectively within the Universal Peace Federation. The purpose of the meeting was to discuss the promotion of peace, and an invitation on behalf of His Excellency Samdech Akka Moha Sena Padei Techo Hun Sen, Prime Minister of the Kingdom of Cambodia, for President Panuelo to attend the Asia Pacific Summit 2019-Cambodia, co-hosted by the Royal Government of Cambodia and the Universal Peace Federation. There was also discussion on an invitation for the President to attend the Universal Peace Federation’s World Summit in February, 2020, to be held in the Republic of Korea.

“Welcome to our country,” President Panuelo began. “We are a peace-loving Nation, as you know, so we will take on every effort to promote peace around the world.”

Secretary-General Stone explained that Universal Peace Federation operates in more than 150 countries, and is a Non-Government Organization (NGO) with Special Consultative Status with the Economic and Social Council of the United Nations, dedicated to building a world of peace in which everyone can live in freedom, harmony, cooperation, and prosperity.

Iso Nahnken of Nett advocated for the value of the world knowing peace the way that Micronesians live it. “[The world] talks about peace, we all want peace, but sometimes it’s only talk. To really live in peace, and to know what that means, one must stay here [in the FSM] and learn,” Iso Nahnken said. “…How to really put [peace] into practice: we’re doing that here. That’s the way we live.”

“You have to experience it,” President Panuelo said in agreement.

The President advised Secretary-General Stone, Chairman Yamada, and Iso Nahnken of Nett that he would be discussing with officials in the Executive Branch on who can attend to support Iso Nahnken and the Nation’s representation at the Asia Pacific Summit 2019—Cambodia, expressing that though he’s interested in attending that there are matters within the FSM that require his attention.

President Panuelo did express, however, that he would intend to ensure that either he or the Honorable Yosiwo P. George, Vice President of the FSM, attend the Universal Peace Federation’s World Summit in February, 2020.

The meeting ended on a positive note, with the President reaffirming the Nation’s commitment to peace and to working inclusively with all allied Governments and NGOs to promote it.