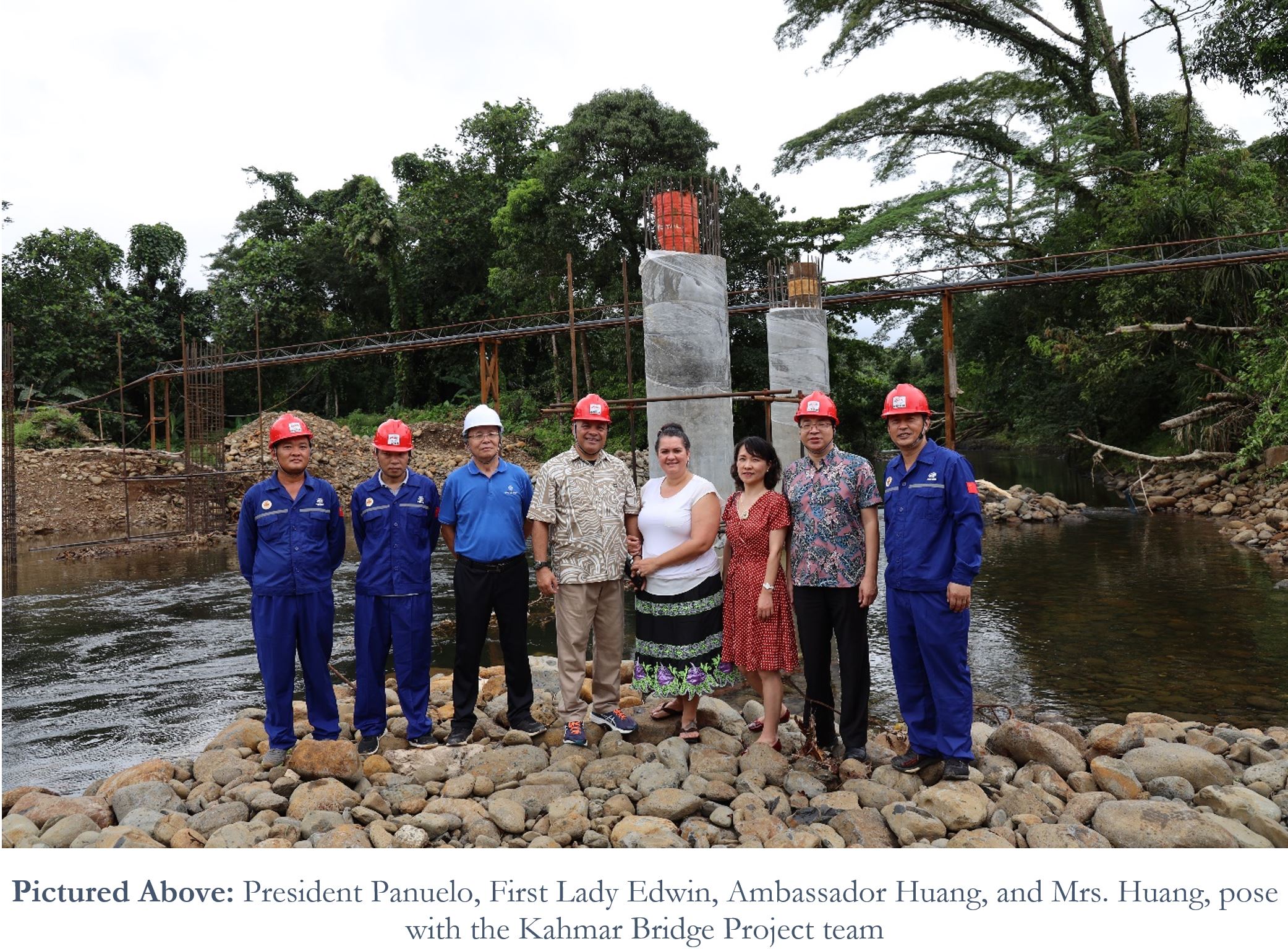 PALIKIR, Pohnpei—On November 6th, 2019, His Excellency David W. Panuelo, President of the Federated States of Micronesia (FSM), toured various ongoing development projects in the FSM State of Pohnpei implemented by the People’s Republic of China (China) with His Excellency Huang Zheng, Ambassador of China to the FSM. The President visited the Kahmar Bridge project site, the Madolenihmw Secondary Roads project site, and the China AID Pilot Farm in Madolenihmw. This release will describe the status of each of these projects, as well as agreements made between President Panuelo and Ambassador Huang regarding requests for additional Chinese development assistance.

The bridge will be 56 meters long (~184 feet) and 10 meters wide (~33 feet). Presently, the steel bar colligation of eight pile foundations, the abutment cap, and the #1 and #2 piers and precast beam have been completed.

The team from China AID (China’s humanitarian development assistance organization) explained that there are some issues that require the FSM National Government’s intervention. Specifically, China AID advised it has been having difficulty coordinating with the Pohnpei Utility Corporation (PUC) and FSM Telecommunications Corporation (FSMTC) who are being asked to relocate power and telecom lines.

While the FSM National Government fully supports both PUC and FSMTC in their vital roles in providing utility services to the people of the FSM State of Pohnpei, President Panuelo noted that the Nation also values the contributions of China AID. The President suggested that he would discuss the matter with relevant officials in the FSM National Government, and potentially beyond, to understand the concerns in more detail and to rectify them.

The second site President Panuelo visited was the Madolenihmw Secondary Road Project, which also began on June 26th, 2019 but has a scheduled completion date of December 25th, 2020 (i.e. Christmas next year).

The project includes the reconstruction of six roads, and newly constructed transportation facilities, with a total road length of 8.7 kilometers (~5.4 miles). Presently, two roads with a length of 2.6 kilometers (~1.6 miles) have been cleared. Additionally, work has occurred on four circular culverts, as well as substantial roadbed filling, roadbed excavation, and riprapping (i.e. to form a foundation with loose stone) and silting (i.e. the process of becoming filled, or blocked, with silt).

The team from China AID explained that it would appreciate the FSM National Government’s assistance in rectifying a potential roadblock in the project’s completion. Specifically, the total amount of coral sand needed for the Madolenihmw Secondary Road Project is approximately 100,000 cubic yards—and the amount they’ve received so far is 6,000 (i.e. 6% of what they need). It was advised that the two companies supplying coral sand can provide, at most, 1,500 cubic yards per month—thus, China AID had the idea of renting their construction equipment to the suppliers in order to promote efficiency and output. China AID alleges, however, that it was asked not to do that by the Pohnpei State Government.

With the understanding that the FSM National Government seeks to both support the Nation’s states (e.g. with the Madolenihmw Secondary Road Project), as well as maintain friendly relations with its development partners (e.g. China), for the broader purpose of improving the lives of the Nation’s citizens, President Panuelo noted the concern and promised he would address it with the Pohnpei State Government. “I’ll talk to the Governor about this,” President Panuelo said. “I know that he supports these projects and wants to serve the people of Pohnpei as much as we all do.”

The third site President Panuelo visited was the China AID Pilot Farm. The farm—which includes a piggery with an accompanying biogas digester—grows a wide variety of fruits and vegetables, such as leeks, peanuts, cabbage, dragonfruit, watermelon, chili peppers, Pohnpeian pepper, and much more. The farm has served the FSM State of Pohnpei for more than 20 years.

“I’m very impressed with this successful project,” President Panuelo said to Ambassador Huang, noting that the farm demonstrates that an abundance of healthy local produce, rich in variety, is possible.

In light of the Nation’s ongoing epidemic with non-communicable diseases (NCDs), the President advised Ambassador Huang that he was interested in seeing how the Pilot Farm’s operations could potentially expand—both within Pohnpei, and in the FSM States of Yap, Chuuk, and Kosrae. The President also suggested that he would discuss with the FSM Department of Foreign Affairs to send official requests, via diplomatic note, regarding China’s assistance in developing mushroom and coconut plantations.

“I want to say thank you to you, Ambassador [Huang], and all the workers who are here. This is the testimony to the very good relations that we have. We thank the generosity of your Government in realizing our infrastructure development needs. So, on behalf of our Government, I want to thank you Ambassador, and express our appreciation,” President Panuelo said.

The FSM National Government truly appreciates the generosity of the Chinese Government for the quality of workmanship, and the quality of work that China-AID—via the China Railway Construction Corporation Ltd—is doing in implementing the many Belt & Road infrastructure projects in the FSM. The Nation further appreciates the ongoing efforts of the China AID Pilot Farm in democratizing access to nutritious and locally grown food.

“I always repeat that part of the preamble of our Constitution,” President Panuelo said, “That says that we extend to other nations that which we seek from each: peace, friendship, cooperation, and love in our common humanity. I hope all of our citizens at home and abroad, and the citizens of all the other countries, can see that it is possible for everyone to have peace with, friendship with, cooperation with, and love with, all peoples and nations.”

The FSM National Government is committed to extending peace, friendship, cooperation, and love in our common humanity with all countries and peoples across the world. The FSM and China celebrated their 30th anniversary of diplomatic relations on September 11th, 2019.