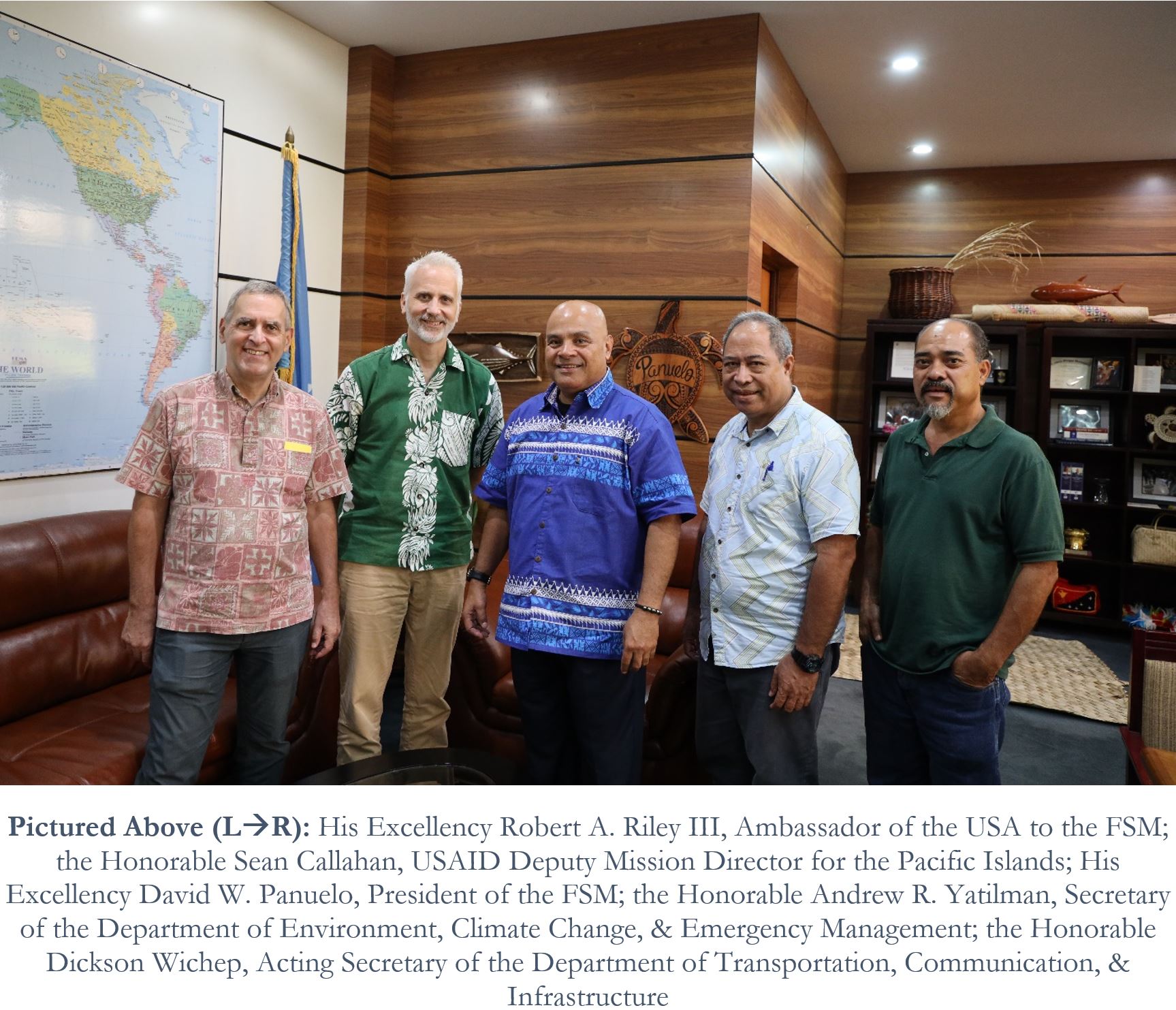 PALIKIR, Pohnpei—On November 21st, 2019 His Excellency David W. Panuelo, President of the Federated States of Micronesia (FSM), received the Honorable Sean Callahan, Deputy Mission Director for the Pacific Islands at the United States Agency for International Development (USAID), in a meeting to discuss USAID’s contemporary and future presence in the FSM. The President invited Deputy Mission Director Callahan to meet so he could follow-up on the announcement made by the Honorable Michael Pompeo, Secretary of the U.S. Department of State, during the 74th United Nations General Assembly (UNGA), regarding enhanced U.S. focus and assistance to the Pacific.  In addition to a forthcoming permanent USAID staff to be based in the FSM, the President spoke with Deputy Mission Director Callahan about private sector development, climate resilience, and vocational education programming, under the lens of the Free and Open Indo-Pacific Strategy.

Deputy Mission Director Callahan spoke about USAID’s efforts in promoting a Free and Open Indo-Pacific, including its pillars of natural resource management, democracy and governance, and economic growth. To further these efforts USAID, which for the FSM has historically operated out of the Republic of the Philippines, will be placing a permanent staff at the U.S. Embassy in Kolonia, ideally by the end of 2019.

One of the elements Deputy Mission Director Callahan discussed that caught the President’s ear was the forthcoming United States International Development Finance Corporation (USIDFC), which was advised to be operational by the end of the 2019 calendar year. The USIDFC was described as a means of expanding and enhancing the FSM’s private sector, which President Panuelo has explicitly requested U.S. assistance in.

Traditionally a Micronesian entrepreneur that has an existing business—or business idea—would seek to secure a loan or financing through organizations such as the FSM Development Bank, Bank of the FSM, Bank of Guam, etc. Supposing that a hypothetical entrepreneur would be unable to secure a loan through regular means, the USIDFC would be able to serve as collateral.

“If a private business [in the FSM] is unable to secure a loan or financing through regular means,” Deputy Mission Director Callahan said, “The U.S. Government can guarantee half of that loan…. So if [for example] a farmer takes out a $5,000 loan…if they default, the U.S. Government will pay half [i.e. 50%] of the loan back to the bank. It’s a way for opening up credit and capital whereas beforehand the bank might be shy.”

While the FSM National Government operates on a standing policy of refusing loans from any individual, organization, or government, President Panuelo noted that the USIDFC may be useful for the Nation’s private sector. The President solicited help from His Excellency Robert A. Riley III, Ambassador of the United States of America to the FSM, to ensure that when the Embassy has a permanent USAID staff onboard that one of their first tasks be to work with and inform the Nation’s private sector on how the USIDFC can propagate growth for businesses.

The President also suggested that USAID presence in the FSM ought to consider how it can further the Nation’s goals in climate adaptation, mitigation, and resilience, such as by increasing the FSM’s capacity in acquiring organizations with accreditation to the Green Climate Fund (GCF), and cooperating with other development partners on existent projects.

“Yesterday,” President Panuelo said, “We met with the World Bank on the FSM’s [Maritime Investment Project], and they’re…[also working on] assessments for our road resilience project under IDA 19. $60 million [for climate resilient roads] may sound like a lot, but…we’re talking about adding [GCF] funding to it. Our capacity to sort out and access that [GCF] funding is…challenging.”

President Panuelo also shared with Deputy Mission Director Callahan details on the Nation’s keen interest in building a subregional vocational education training center. The President has formerly discussed this topic in some capacity or another with several of the FSM’s other development partners, including the Republic of Singapore, Japan, and the People’s Republic of China.

“[The FSM] will host the next Micronesian Islands Forum (MIF), and we want to…resurrect [Pohnpei Agriculture & Trade School] as a regional or subregional vocational education training center,” President Panuelo said. “Maybe we’ll ask one partner to design and build [the school], and then beyond that we’ll look at other partners to work with us to help develop the content and curriculum, and the training of trainers.”

Deputy Mission Director Callahan noted that the U.S. Congress provides funding to USAID for education, and advised of USAID’s potential interest in assisting the FSM with this project. “The fact it would be subregional would be…attractive,” Deputy Mission Director Callahan said, advising that curriculum development and trying to secure accreditation are activities USAID has targeted in the past.

“This is a great start for us,” Deputy Mission Director Callahan said. “Thinking about vocational training, [climate] resilience, private sector development…would really support [the FSM] and what [His Excellency Donald J. Trump, President of the United States] and [the Honorable Michael “Mike” Pompeo, Secretary of the U.S. Department of State] are saying about a Free and Open Indo-Pacific.”

The meeting ended on a positive note, with President Panuelo thanking Ambassador Riley and Deputy Mission Director Callahan for their visit.

We have 329 guests and no members online