Third Special Session of the 21st FSM Congress Opens in Chuuk; Outcomes of the Committee to Wait on the President 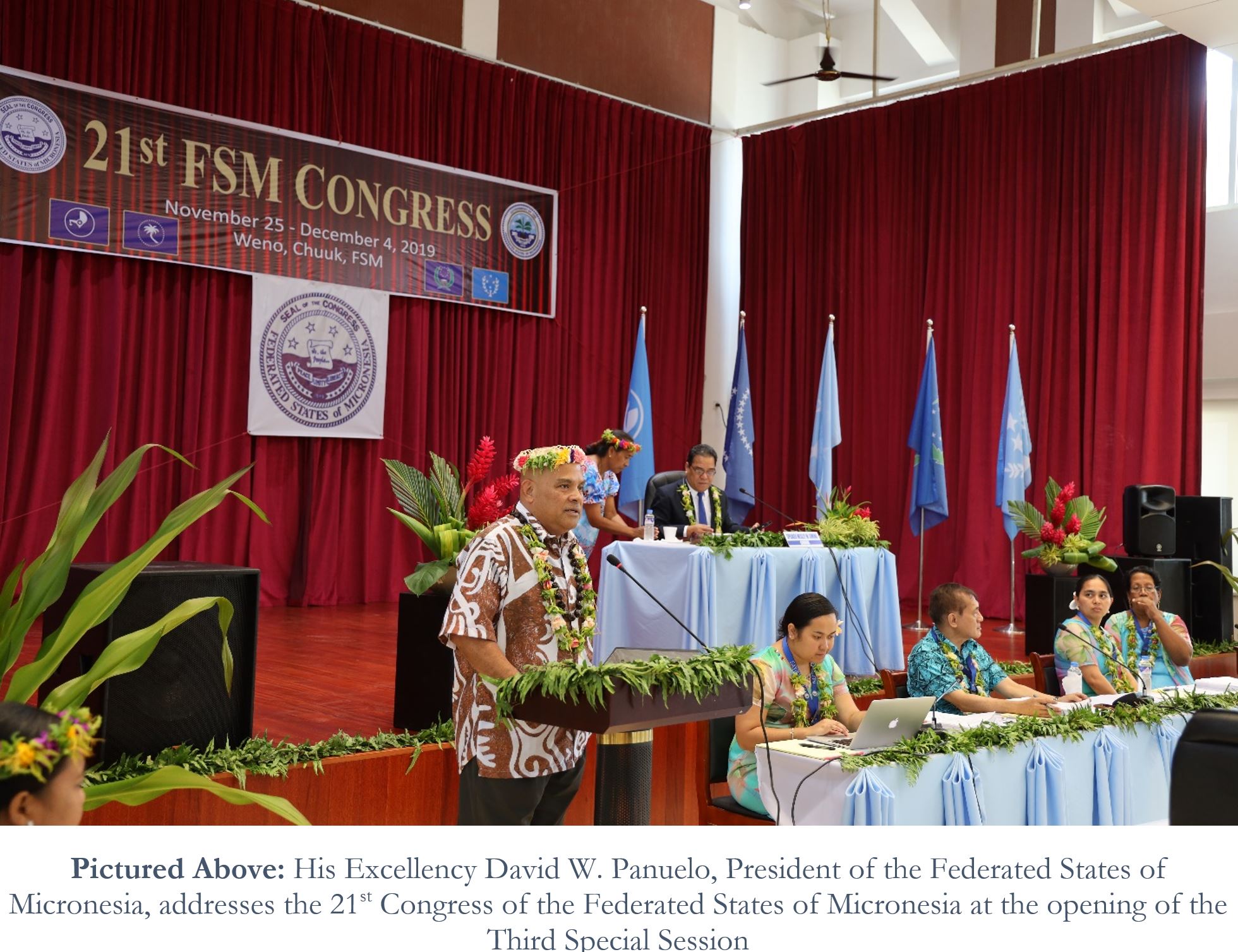 Third Special Session of the 21st FSM Congress Opens in Chuuk; Outcomes of the Committee to Wait on the President

The Honorable Wesley W. Simina, Speaker of the 21st FSM Congress, invited a Special Order of Business which included remarks by His Excellency David W. Panuelo, President of the FSM. These remarks, along with all FSM Congressional sessions, are available in full through the kind and transparent support of the Congress Public Information Office. The Opening of the Third Special Session of the 21st Congress can be found here: https://www.youtube.com/watch?v=vyULd4um4FQ&f

After the opening session, the President received the Committee to Wait, chaired by the Honorable Aren B. Palik, with committee members the Honorable Isaac V. Figir, the Honorable Dion G. Neth, and the Honorable Derensio S. Konman. The agenda included the Executive Branch’s nominations for confirmation of advice and consent positions in the National Government, discussion on numerous budgetary issues, recent major projects and programs with the World Bank and Asian Development Bank, and the upcoming state visit to the People’s Republic of China (China).

For the position of Secretary of the DOJ the President has nominated the Honorable Joses R. Gallen, who also served as Secretary of Justice in the previous administration under His Excellency Peter M. Christian.

For the position of Secretary of the DTC&I the President has nominated His Excellency Carlson D. Apis, who presently serves as Ambassador of the FSM to China.

For the position of Secretary of the DR&D the President has nominated the Honorable Marion Henry, who also served as Secretary in the previous administration under His Excellency Peter M. Christian.

For the position of Secretary of the DFA, the President has nominated the Honorable Kandhi Elieisar, who presently serves as the Consul General of the Nation’s Consulate Office in Honolulu.

For the position of Deputy Secretary of the DFA, the President has nominated the Honorable Ricky Cantero, who presently serves as Acting Secretary and formally as the Assistant Secretary heading the Division of Americas and European Affairs.

For the position of Secretary of the DOFA, the President has nominated Eugene Amor, who presently serves as a consultant.

For the position of Secretary of the DHSA, the President has nominated Livinson A. Taulung, who presently serves as the Director of the FSM State of Kosrae’s hospital.

“On behalf of Vice President George and I,” President Panuelo said in his special remarks at the Third Special Session’s opening, “We encourage you to deliberate on our submissions with the same consideration we did, and trust that you will reach the same conclusion that our preferred appointments are in the best interest of our Nation.”

Regarding the Executive Branch’s supplemental budget request, the President noted that the DOFA projects approximately $3.6 million dollars for appropriations in the Third Special Session, and requested approximately $1.8 million dollars to support the Executive’s capacity to carry out its mandate. While this funding would be allocated towards a great deal of both one-off and ongoing projects and programs, perhaps the most immediately interesting to citizens of the FSM would be the supplemental funding to the DOJ, with focuses on anti-corruption efforts and the necessary work for the FSM to become a member of the International Police Organization (INTERPOL), which President Panuelo has previously advocated for.

The President noted that the next Regular session of Congress, in January 2020, will submit a more significant supplemental budget request from the Executive Branch, the bulk of which would include a proposed allotment of funding for investment in infrastructure and renovations, to include the Nation’s foreign missions (embassies) and line agencies at the FSM National Government.

A substantial portion of the meeting involved discussion on the Nation’s infrastructure needs, particularly as they relate to tackling the existential threat of climate change. President Panuelo noted that while the World Bank, through its IDA 19 funding, is expected to provide approximately $60 million dollars of assistance in building climate resilient roads that it may not be enough—hence, when the President travels to China in December 2019, he intends to ask His Excellency Xi Jinping, President of China, for Chinese support in climate resilient roads. Additional requests will include China’s support to design and construct the subregional vocational education center to replace the former Pohnpei Agriculture & Trade School (PATS), and further discussion on the FSM’s request for China’s support to the sovereign FSM Trust Fund.