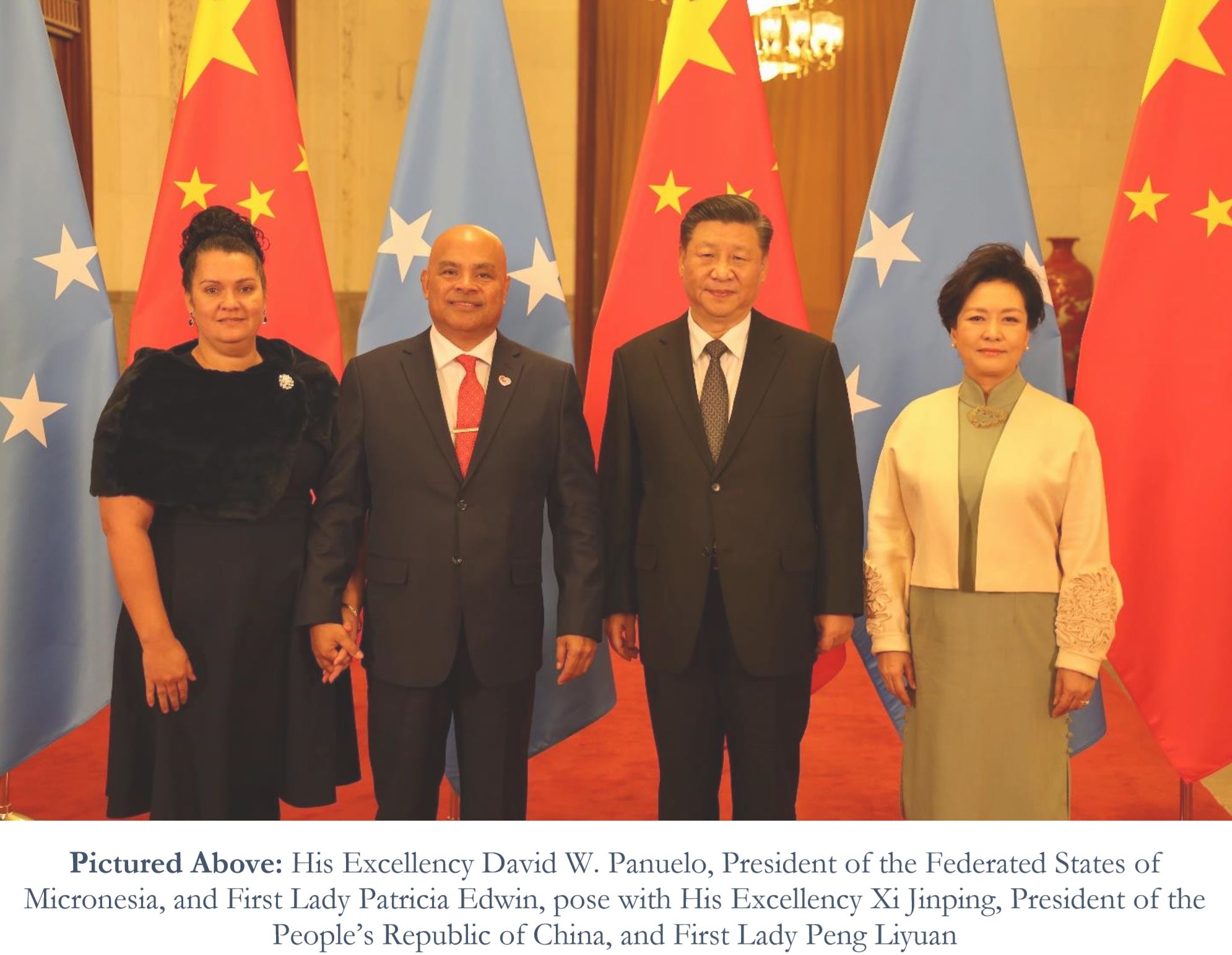 BEIJING, China—On December 13th, 2019, His Excellency David W. Panuelo, President of the Federated States of Micronesia (FSM), had formal meetings first with His Excellency Li Keqiang, Premier of the People’s Republic of China (China), and then with His Excellency Xi Jinping, President of China. (Premier Li is the Head of Government, while President Xi is the Head of State). Preceding these meetings, President Panuelo participated in a wreath-laying ceremony at Tiananmen Square in honor of China’s patriots and freedom fighters at the Monument of the People’s Heroes, and following the formal meetings the President attended a banquet hosted by President Xi where the two were able to discuss, very freely and openly, how the FSM-China “Great Friendship” can reach a new high.

The primary outcomes of the meetings, i.e. the ones that resulted in a physical product, are arguably the various signed agreements and/or exchange of letters on economic and technical cooperation, which include a visa waiver for diplomats and government officials (i.e. making government-to-government business easier), approximately $10,000,000 of funding to renovate the Pohnpei State Government Complex, a feasibility study on Chuuk State’s roads and Pohnpei State’s primary roads as part of a larger “Pave the Nation” plan for all four states (which includes, for Chuuk’s road alone, an estimate of about $50,000,000), and the initial groundwork on determining what a subregional Micronesia-wide vocational training institution would look like. (President Panuelo’s request is for China to design, and construct, the vocational training institution). Of equal import would include the signed protocol on Chinese medical teams visiting the FSM to provide specialized services to remote and underserved communities, and the Memorandum of Understanding on elevating agricultural cooperation, and approximately $12,000,000 of new economic cooperation.

For historical comparison, over the past 30 years China has provided more than $100,000,000 total economic and technical assistance to the FSM. Thus, this State Visit by President Panuelo is—by orders of magnitude—the most productive and engaging in one single visit. It is for this reason, among others, that the FSM National Government is so positive about its future relations with China and the Chinese people.

Additional outcomes that are of significant importance to the FSM National Government—so that it can carry out its mandate to provide essential services to the Nation’s citizens—include China’s support for the FSM to host the North Pacific United Nations Multi-Country Office.

Beyond the outcomes proper, President Panuelo continued to advocate for China’s private sector support. “I wish to acknowledge our sincere appreciation to the Liancheng Overseas Fisheries company, whose investments have contributed immensely to our Nation’s economic and social development,” President Panuelo said. “Another notable company that I would…[mention] for [China’s] support is the Exhibition & Travel Group (ETG), whom we are hoping to cooperate together with on tourism in the State of Yap.”

President Xi, who noted that FSM-China trade has been growing at a nearly 30% rate every year for the past five years, advised that China welcomes increased imports from the FSM (which could be traditional exports, such as fish, OR could be newer exports, such as coconut biofuel), and described at great length how “China will continue to provide the FSM with economic and technical assistance to the best of our capacity.”

“It’s my first visit and I’ve been very impressed with China,” President Panuelo said. “Our two countries have enjoyed a great relationship based on the bedrock of the One China Policy. Your country has shown us that even though we are small that we are treated with [the] deep respect that you accord other [and larger] countries, and we respect that treatment of our country.”

“The FSM is China’s good friend, and good partner in the Pacific Islands…your visit coincides with the 30th anniversary of [FSM-China] diplomatic relations. …[China is] ready to work with you, using our 30th anniversary as the opportunity to enhance our mutual trust, expand the cooperation, and exchanges, and bring our comprehensive strategic partnership to new heights, and deliver more benefit to the people of our two countries,” President Xi said.

“China maintains that countries, big or small, are all equals,” Premier Li said. “We in China firmly support FSM in following the path suited to YOUR realities, and we will continue to work with you to work to deepen political trust and…people-to-people exchanges.”

Both President Xi and Premier Li described, to President Panuelo’s appreciation, China’s continuing commitment towards combatting climate change. China remains a party to the Paris Agreement, which—in the opinion of the FSM National Government—is one of the Nation’s, and indeed the Planet’s, best hopes for survival.

After the day’s events, the President had a quick debriefing with the FSM delegation.

“You can be assured that [China] will really pay attention to our development,” the President said to his delegation. “President Xi opened up to me…I feel a very good friendship with the man. …[I am confident that] we will take [FSM-China’s Great Friendship] to a new level of cooperation.”

“When I say that our Nation must be united, I really mean it,” the President said, looking at the Honorable Esmond B. Moses, Vice Speaker of the 21st FSM Congress, the Honorable Aren B. Palik, FSM Senator for the State of Kosrae, the Honorable Robson U. Romolow, FSM Senator for the State of Chuuk, the Honorable Johnson S. Elimo, Governor of the State of Chuuk, and the Honorable Carson K. Sigrah, Governor of the State of Kosrae, and the rest of the delegation. “Our leadership and our citizens must be united. And so, we have to work together to help our citizens be aware of how important our relations with countries like the United States, Japan, China, and Australia are. We only have friends and allies. We are stronger when we work together, and we must work together to eliminate any negative mindsets because, with our relationships, there is nothing to be negative about. Over the past 30 years, China has NEVER infringed, nor chipped away, part of our sovereignty because of their deep respect for other countries’ internal affairs. China’s development assistance has always been at the Nation’s request, and our citizens must take comfort and confidence in our National and State Governments because we have no loans, we have a policy of not taking loans, and not one bit of our country is being ‘auctioned off’ as some news media fear.”

The FSM National Government looks forward to advancing and strengthening its Great Friendship with China, taking it to a new high in the years and decades to come.