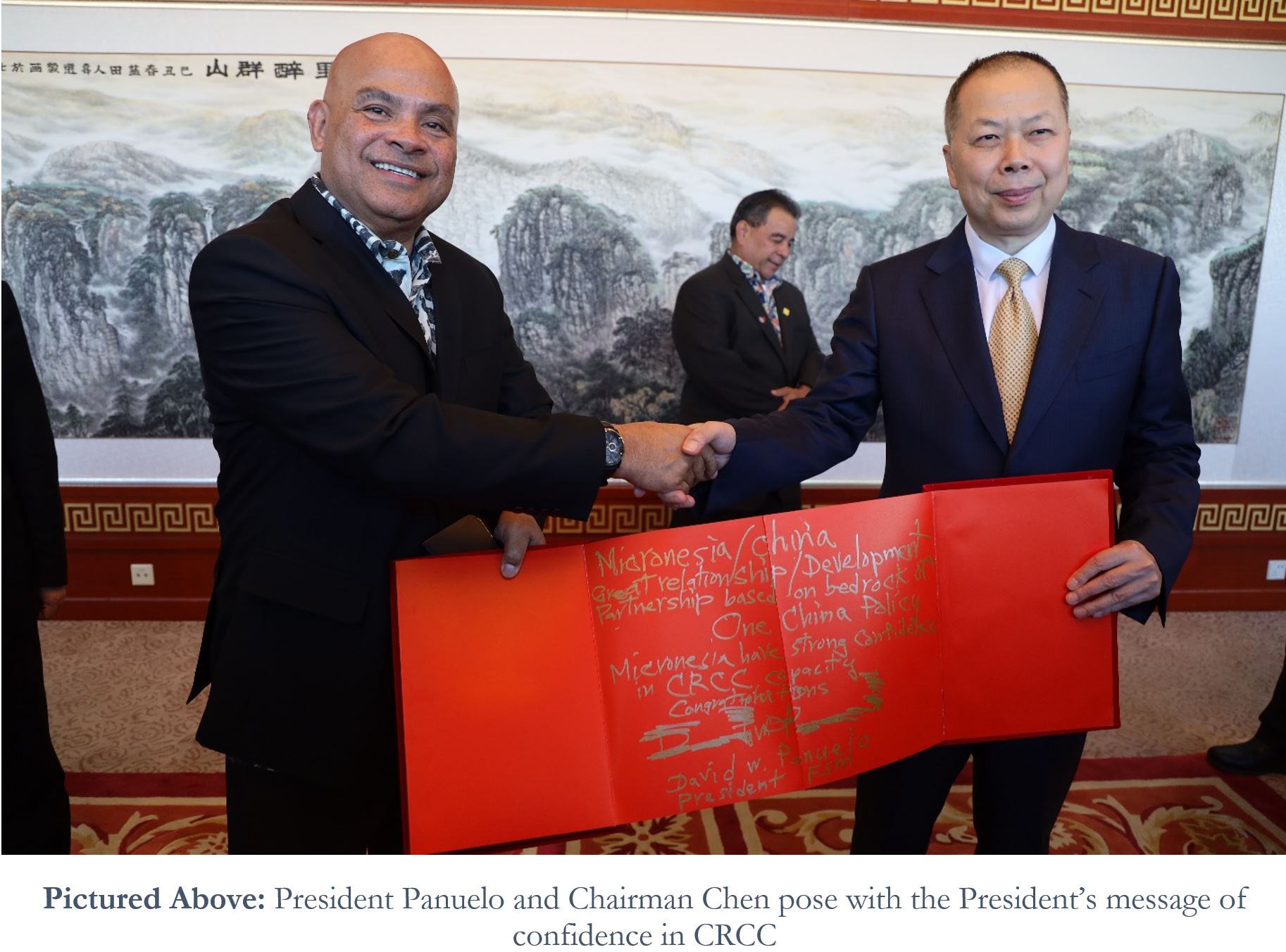 BEIJING, China—On December 14th His Excellency David W. Panuelo, President of the Federated States of Micronesia (FSM), was received by Mr. Chen Fenjian, Chairman of the China Railway Construction Corporation (CRCC), to learn about CRCC—the same company building the Kahmar Bridge in Pohnpei State and the Madolenihmw secondary road—as well as to discuss the “Pave the Nation” project of building and improving climate resilient roads throughout the Nation. Among other events and goings-on, the President also toured the Forbidden City, was long-form interviewed by Xinhua’s CNC World television program and, in the evening, unveiled the new FSM-China 30th anniversary commemorative postcard and then met with FSM students living in Beijing.

The morning began with the President visiting the CRCC headquarters. CRCC—which has approximately 300,000 employees—operates in 120 countries. The company has constructed more than 100,000 kilometers of railways, more than 500,000 kilometers of expressways and motorways in China, and is rated 3rd among the top 250 global contractors. Exemplars of their work include the Tanzania-Zambia Railway in Africa, the Ankara-Istanbul Railway in eastern Europe, and the Mecca-Medina Railway in the Middle East. The purpose of sharing this information with citizens is to emphasize that the company, which President Panuelo has advocated for taking the lead on the newfound “Pave the Nation” programming as an example of the FSM-China Great Friendship and Development Partnership, is to ensure that all are aware that the FSM National Government takes climate resilient roads throughout the FSM seriously. “Our citizens deserve to know the confidence we have in CRCC and the good job they’re already doing, and will do in the near future,” the President said.

“We want to congratulate your company, Chairman Chen,” President Panuelo said, “for your role in the development of China and your role in the development around the world. I will assure you of our highest and strongest cooperation to make sure that the projects that are implemented by your company in our country are given the strongest support, and that is the reason why I visited the [Kahmar Bridge and Madolenihmw secondary roads] projects in November.”

“Now is the prime time for [FSM and China] to extend…the hands of cooperation,” Chairman Chen said. “The FSM is the most important market for CRCC in the [Micronesian subregion]. Thank you for your support of the people and Government and considering our countries’ close relationship and friendship.”

Later in the day, the President and his delegation visited the Forbidden City, followed by an interview with CNC World. Following his interview, the President went to the FSM Embassy to join in the unveiling of the new FSM-China 30th anniversary commemorative postcard.

“It’s people-to-people relationships that makes our Great Friendship so great,” President Panuelo said in the postcard unveiling ceremony. “I am humbled by the achievements that we are able to witness in your country, and hope that this commemorative postcard will, in its own way, serve to enhance our bilateral relations.”

The evening was capped off with a meeting with the Nation’s students in Beijing. The meeting began with remarks by His Excellency Carlson D. Apis, Ambassador of the FSM to China and recently confirmed Secretary of the Department of Transportation, Communication, & Infrastructure. The President intends to formally recall Ambassador Apis before the January 2020 session of the 21st FSM Congress so that he can be sworn-in and carry out his new duties.

“Mr. President…it is a cold evening tonight but our patriotism in your achievements has kept us warm,” Ambassador Apis said, describing how President Panuelo’s visit has seen the historical 100 million dollars of Chinese economic assistance to the FSM over the past 30 years increase by an additional 21 million dollars.

“We are very proud of you all,” President Panuelo said in his remarks to the students, noting his regret that—due to a death in the First Lady’s immediate family—the President and First Lady would be designating the Honorable Esmond B. Moses, Vice Speaker of the 21st FSM Congress, to continue heading the delegation for the State Visit.

The President described, among other matters, his appreciation to the students for building their capacity, emphasizing that they are all ambassadors of the FSM to China and that—upon their return home—they will be the future leaders, decision makers, and project implementers in the FSM’s Nation-building process.

“President Xi and I met and made some very substantive agreements, the result of which is the signing of six [Memorandums of Understanding] and agreements,” President Panuelo said, highlighting in particular his enthusiasm for building the Nation’s roads and for China’s support in the design and construction of a vocational education institute.

After a song performed by the students, Mr. Ivan Harris—president of the local FSM student body organization—gave some brief remarks.

“We are very honored and proud to see you on TV last night, Mr. President,” Mr. Harris said. “Your visit has magnified our small islands here…we are very proud of your visit here and wish to encourage your Excellency to continue the good work you do, while we do our best to make our country and family proud. Rest assured that we are in good spirit here in China, and we hope more can come to study with us to experience China and judge for themselves based on firsthand experiences from us.”

The Honorable Aren B. Palik, Senator at-large for the State of Kosrae, and the Honorable Robson U. Romolow, Senator for the State of Chuuk, announced that there will be an additional appropriation, on top of the $35,000 for this year, to support FSM students in Beijing with their studies. “We don’t want them distracted by financial burdens, so they can focus on their studies,” the Senators said.

“This is why I like bringing Congressmen to our visits!” President Panuelo said.

The remaining delegation members will continue the original Program of Visit, including trips to the Provinces of Hainan and Guangdong, and specifically the cities of Haikou (Hainan), Guangzhou (Guangdong) and Shenzhen (Guangdong), to include meetings with students and local leadership.

We have 1373 guests and no members online