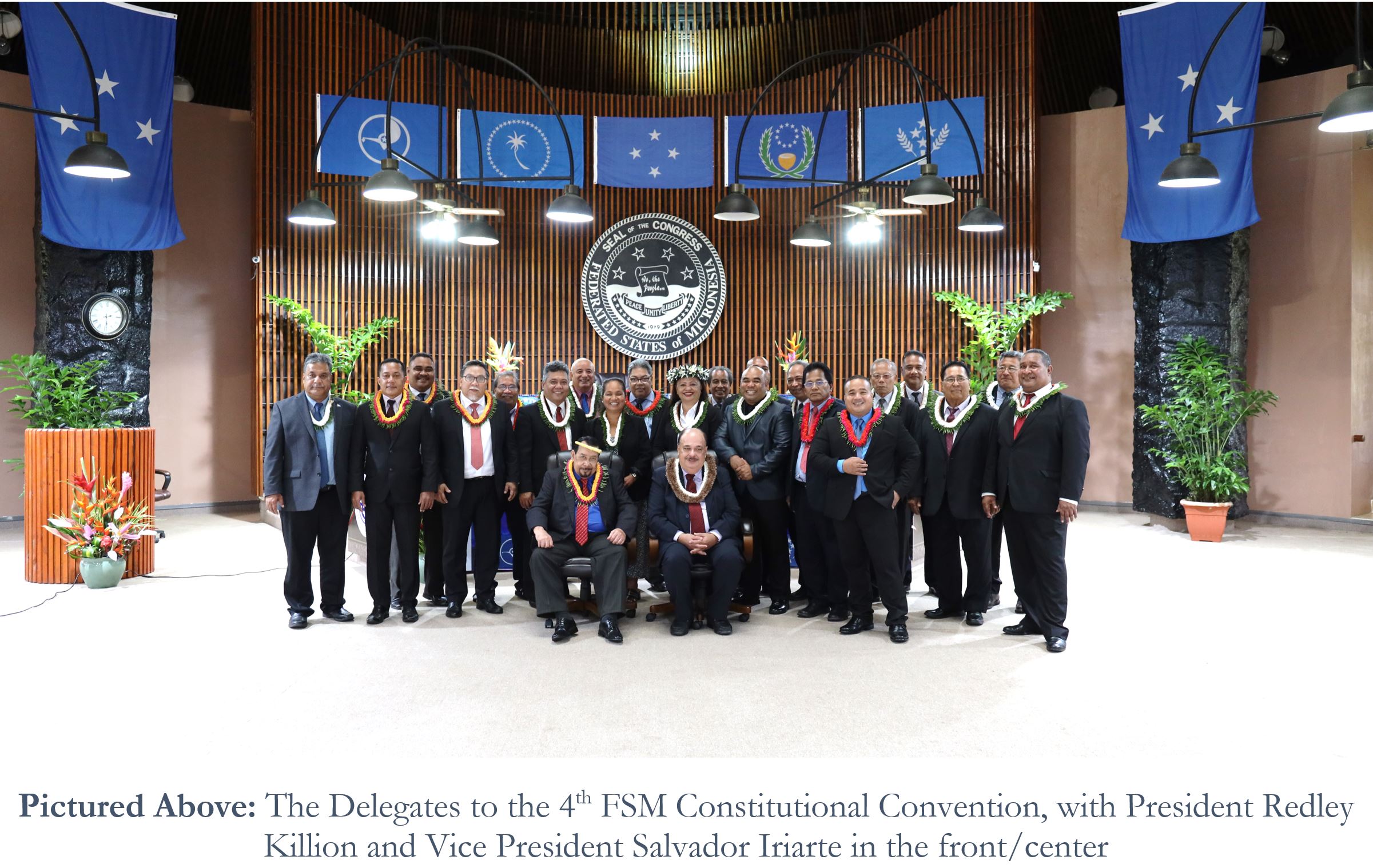 Amongst President Panuelo’s ceremonial routines included a brief speech congratulating the delegates to their positions, and calling for the delegates to be collaborative, cooperative, and practical whilst in the process of having bold visions for the betterment of the Nation and its citizens.

“Our Constitution was drafted by our Founding Fathers in such a manner that makes it very difficult for any change to happen,” President Panuelo said. “The threshold of 75% approval by the voting population in three of our four states [for proposed amendments] is a very tall order. I ask and implore upon you that we be practical…because if we are overambitious…it can be lost in the translation and public awareness process.”

“An important opportunity,” President Panuelo said, “inscribed into our highest law of the Nation, so as to ensure preservation and maintenance of the rights of the people, is the right of our citizens to be able to once again ask this fundamental question: how can we make things better for our country? This question is amplified at this very moment for delegates to ponder on and think about. This question, among others, must guide every action we take.”

“This Constitutional Convention is a reaffirmation of who we are, that we are Micronesians, proud of our heritage and committed to protect the promise of the future—including mutual enjoyment, and equitable sharing of the resources of our land, natural, cultural, and other forms of resources,” President of the Convention Killion said. “I am confident that the different ideas that each of us will be discussing will be…of value in the improvement of our Constitution to further strengthen unity and prosperity and for our Nation.”

The 4th Constitutional Convention adopted official Rules of Procedure, and unanimously accepted the Qualifications Report which confirmed that all delegates-elect were appropriately qualified to serve. Prior to the election of residing officers, the delegates swore an Oath of Office administered by the Honorable Dennis Yamase, Chief Justice of the FSM Supreme Court.

At 12:02pm, Iso Nahnken of Nett, the Honorable Salvador Iriarte from the State of Pohnpei, was elected as Vice President of the Convention.

At 12:04pm, the Honorable Andrew R. Yatilman, from the State of Yap—who also serves as Secretary of the Department of Environment, Climate Change, & Emergency Management—was elected as Floor Leader of the Convention.

At 12:06pm, the Honorable Johnson S. Asher, from the State of Kosrae, was elected as the Chair of the Committee of the Whole.

Following a brief recess and discussion amongst the delegates, including a caucus between President Killion, Vice President Iriarte, Floor Leader Yatilman, and Chairman Asher, President of the Convention Killion assigned Chairs to the five Standing Committees at 1:12pm.

The Chairman of the Civil Liberties and Traditions Committee is Delegate Mason Albert from the State of Pohnpei.

The Chairman of the Government Structure and Functions Committee is Delegate Victor Nabeyan from the State of Yap.

The Chairman of the Style and Arrangement Committee is Delegate Salomon Saimon from the State of Pohnpei.

The Chairwoman of the General Provisions Committee is Delegate Yoslyn G. Sigrah from the State of Kosrae.

The Chairman of the Public Finance and Revenue Committee is Delegate Peter Sitan from the State of Chuuk.

Vice Chairmen and Members of the committees, it was advised, will be formalized on January 8th, 2020, or soon after.

At 1:54pm President of the Convention Killion advised that there would be a Special Committee to Wait on the President and Speaker, comprised of Akillino H. Susaia (Pohnpei) as the Chairman with members inclusive of Andy P. Choor (Yap), Cindy S. Mori (Chuuk), and Yoslyn G. Sigrah (Kosrae).