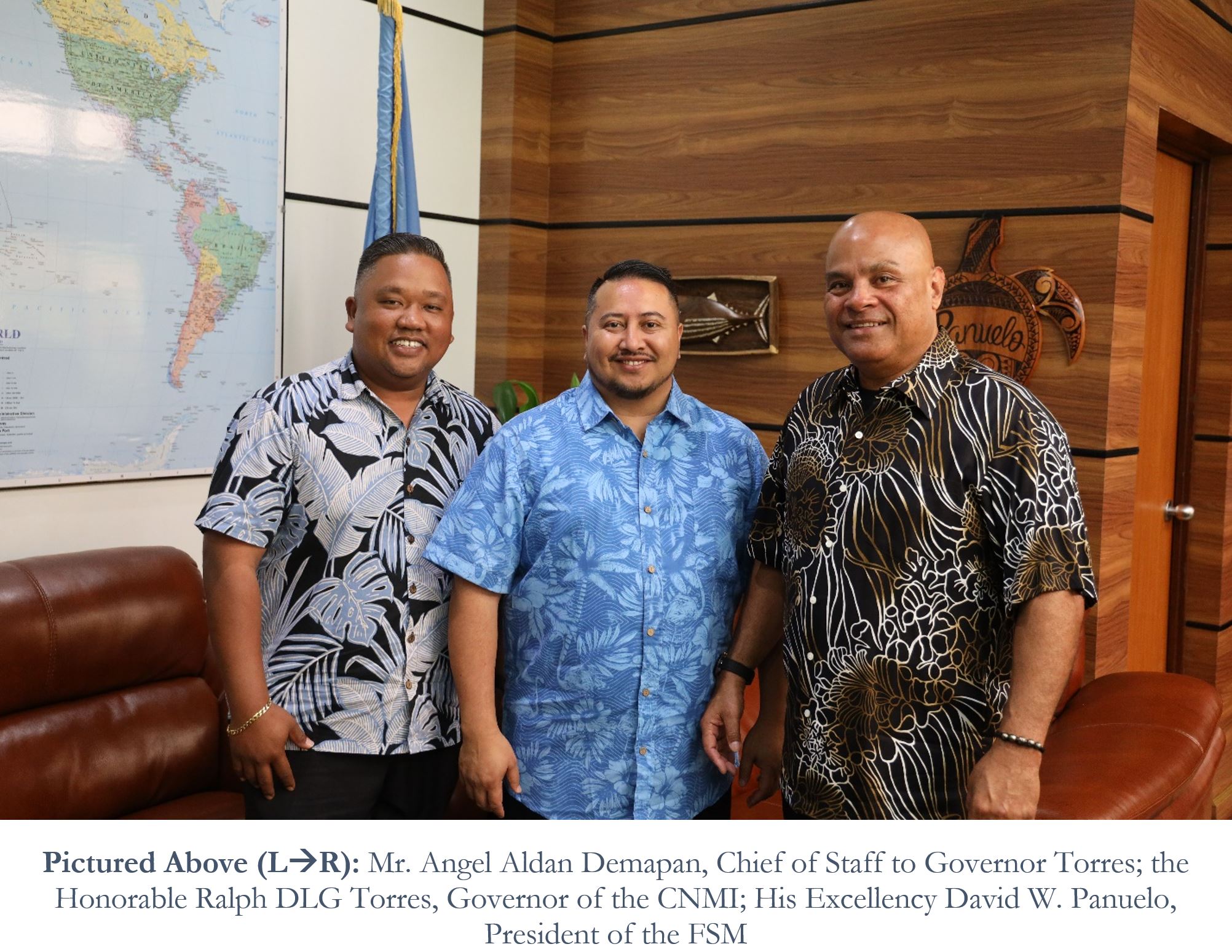 PALIKIR, Pohnpei—On January 13th 2020 His Excellency David W. Panuelo, President of the Federated States of Micronesia (FSM), received the Honorable Ralph DLG Torres, Governor of the Commonwealth of the Northern Marianas (CNMI) in a courtesy call. Governor Torres is in the FSM to attend several meetings with regional and subregional bodies and to attend the Joint Inauguration Ceremony of the new Pohnpei State Leadership. The primary outcome of the meeting was President Panuelo and Governor Torres reinforcing the Micronesian solidarity between the FSM and the CNMI, particularly with regards to the sharing of information and, where appropriate, strategizing on the Compact Impact component of the negotiations for the Compact of Free Association, as Amended (COFA). Also discussed was the exportation of FSM-grown produce (e.g. banana, taro) to the CNMI.

“Governor, welcome,” President Panuelo began. “With the close relationship between Micronesians, you and the [CNMI] are part of our extended family. It’s a big day for [the Honorable Reed B. Oliver, Governor of Pohnpei State], and I’m glad that you’re here for it.”

After discussing Micronesian solidarity and sharing views on subjects of mutual interest, Governor Torres noted the CNMI’s interest in providing incentives to companies that can provide taro, yams, bananas, and other local foods to Saipan and other islands within the CNMI. It was advised that, after Typhoon Yutu, the CNMI was without banana or taro for approximately nine months.

“That would be very good,” President Panuelo said of exporting FSM-produce to the CNMI, noting that he would be happy to work with the Governor and the FSM State Governments to realize a mutually beneficial arrangement.

The conversation then turned to the FSM’s relationship with the United States of America, both in the form of the COFA, and its negotiations, and more broadly. Governor Torres advised that the CNMI is aware the FSM is in the process of preparing for the renegotiating of, or renewing, the terms of the current COFA, as Amended, and that the CNMI is ready to provide any appropriate help, such as relevant statistics and other information.

Both President Panuelo and Governor Torres reflected on how on-island visits from members of the United States Congress would be important, even critical, to a successful understanding on the part of the U.S. Government on the importance of strengthening the Enduring Partnership between the FSM and the U.S.

“Our [Joint Committee on Compact Review & Planning/JCRP] is really working hard,” President Panuelo said. “So, when we meet with the U.S., both sides [will be] ready. But on the topic of the COFA Impact, Governor, you must know that we’re with you. The FSM is with the [CNMI], the Territory of Guam, and the State of Hawaii—because we know that it’s a [U.S.] Congressional obligation…to compensate for its financial impact. However, I believe that we also need to be realistic in terms of what the [U.S. Government Accountability Office] will come out with, and align our [views and plans] based on those numbers, so we can all be together on it.”

Governor Torres reiterated his hope that the U.S. Government truly appreciates and understands the significance of its relationship with the FSM and the other Micronesian Nations and Territories. The Governor also noted his hope for increased U.S. private sector influence and presence in the CNMI and Micronesia more broadly.

President Panuelo agreed, highlighting his hope that the Honorable Lisa Murkowski, Senator for the U.S. State of Alaska and Chair of the U.S. Senate Committee on Energy & Natural Resources, would visit the FSM soon.

“I was very frank with [the Honorable Michael “Mike”] Pompeo, [Secretary of the U.S. Department of State], who was sitting right where you are,” President Panuelo said. “Our relations with other countries will never encroach on our relationship with our first and foremost ally, but I told [Secretary Pompeo] that our negotiations have to reflect the maturity of our relationship, because there are too many bottlenecks [with implementing infrastructure projects].”

The President advised that, for example, that in his State Visit to the People’s Republic of China (China) in December, 2019 that His Excellency Xi Jinping took the Nation’s requests to pave the Nation’s roads and to design and build a vocational education institute to replace the former Pohnpei Agriculture & Trade School (PATS) seriously. President Panuelo noted with optimism that, although he has appropriately deferred the negotiations on the COFA to the JCRP, the U.S. Government will consider that the contemporary needs of the FSM and its citizens may have evolved from its needs in 2003 and in 1986.

“I know we can have strong confidence with friends like Secretary Pompeo, [the Honorable Mark T. Esper, Secretary of the U.S. Department of Defense], and [the Honorable Robert C. O’Brien, National Security Advisor to Donald J. Trump, President of the United States],” President Panuelo said.

The meeting concluded with President Panuelo wishing Governor Torres a pleasant stay in the FSM, noting that he and any citizen or resident of the CNMI is always welcome.