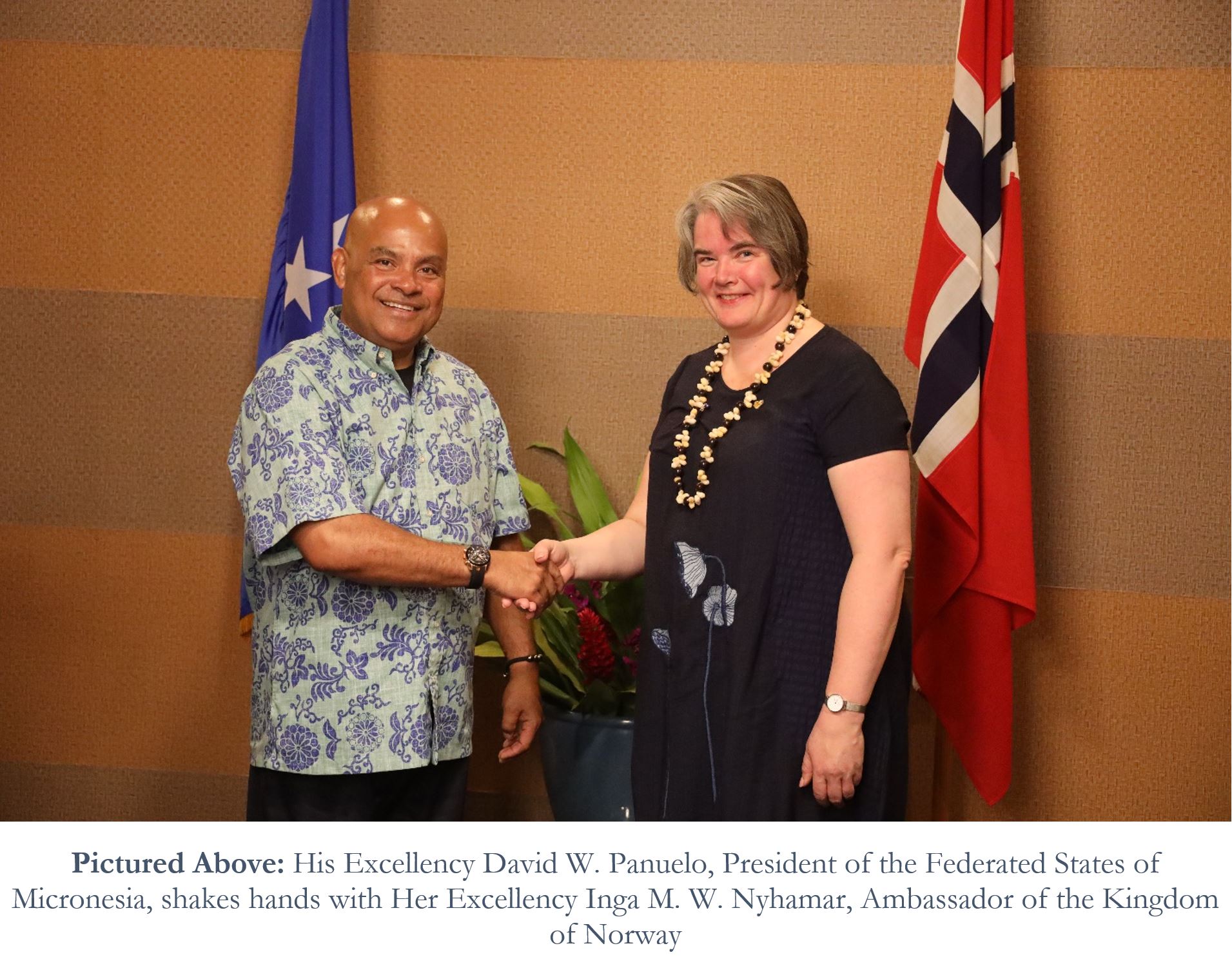 PALIKIR, Pohnpei—On January 16th 2020 His Excellency David W. Panuelo, President of the Federated States of Micronesia (FSM), received Her Excellency Inga M. W. Nyhamar, the first Ambassador of the Kingdom of Norway to the FSM ever since the two countries’ formal diplomatic relations began on April 12th, 2018, who presented her credentials to serve as the official representative of Norway to the FSM. After the Presentation of Credentials, President Panuelo and Ambassador Nyhamar had a productive conversation on how the FSM and the Norway can cooperate in areas ranging from combatting climate change and marine litter. The primary outcomes of the meeting include the President advising, in no uncertain terms, the FSM’s total support for Norway’s candidature to the United Nations’ Security Council in 2021-2022, and broad agreement to explore as many means of cooperation between the FSM and Norway as possible.

“We are so excited to have you as our first Ambassador,” President Panuelo began. “Please convey to your King and to your Prime Minister that this occasion symbolizes the first engagement of our diplomatic relationship and a friendship that will [flower into something truly beautiful.]”

“I want to reiterate again today that I know there is competition [for the 2021-2022 UN Security Council seat],” the President continued, “but [the FSM] has committed…to support your candidature in the next election.”

Ambassador Nyhamar advised that Norway is grateful for the FSM’s support, particularly since—as a founding member of the UN that has always been committed to multilateral cooperation—Norway would be able to push issues that are important to them and to the FSM. Specifically, issues such as climate change and the need for truly global cooperation, and tackling marine pollution, were discussed in detail and depth.

“[The FSM] sees Norway as one of the strongest environmental-conscious countries in the world,” the President said of the country that most recently hosted the 2019 Our Ocean Conference. “We appreciate that.”

President Panuelo requested Norway’s support for the FSM to host the upcoming United Nations Northern Pacific Multi-Country Office (MCO) that all the Micronesian Presidents agreed to in September 2019, and then spoke further on the FSM’s hopes for FSM-Norway relations and cooperation.

“Ambassador, I assure you that our Government is very genuine: you are a friend,” the President said. “Even though we are small, we will give our strongest support in areas that are important to you. [That said], I have made our diplomatic outlook very aggressive—so we’ll be coming to you with some ideas of cooperation.” Examples of said cooperation were suggested to range from financial security advice (Norway has reportedly the strongest sovereign wealth fund in the world, and the FSM’s quest to grow its own trust funds for the Nation’s security is a priority agenda item) to collaboration with partner organizations like the Blue Prosperity Coalition, Hawaii Green Growth, and Okeanos Foundation for the Sea to protect the FSM’s environment at home and, more globally, the environment of the planet.

The President continued to express that, in his view, in traditional existential crises—such as World War Two—part of the eventual success to reaching peace (and perhaps part of the cause of conflict in the first place) was because the narrative, from a storytelling perspective, was fundamentally Man Vs. Man, where human beings express to one another their feelings and beliefs, and societies organize ideas and actions into some blend of Right and Wrong, Acceptable and Not Acceptable, or Good and Evil, with a corresponding Hero and Villain. Man Vs. Nature narratives such as the world’s conflict with Climate Change, by contrast, can be more difficult to understand, and at a base level may not be as emotionally engaging to many as Man Vs. Man narratives—but Climate Change, as a reality and not as a narrative, nonetheless represents the greatest security threat the FSM, and the world, has ever faced.

“That’s why I made the statement at the [United Nations General Assembly],” President Panuelo said. “The environmental challenges this new decade is the equivalent of, or more than, the Second World War. Climate Change is our World War—but with war, you can stop it when people seek peace. With Climate Change—if we don’t band together, it will be too late and [we may face the demise of] our natural world that sustains humanity.”

Ambassador Nyhamar agreed that it is important to work through global and regional mechanisms to combat issues like climate change and marine pollution, and emphasized that Norway is excited to cooperate with the FSM on issues of mutual benefit. The Ambassador described in detail, for example, how Norway—which at one point almost depleted some of its fisheries stocks—has since developed an integrated ocean management system, describing it as a capacity skill that must meet the interests of individuals, industry, and the environment.

The meeting ended on a positive note, with President Panuelo giving Ambassador Nyhamar a brief tour of his office and reiterating the Nation’s hope that the FSM and Norway will advance a very warm friendship in the months and years to come.