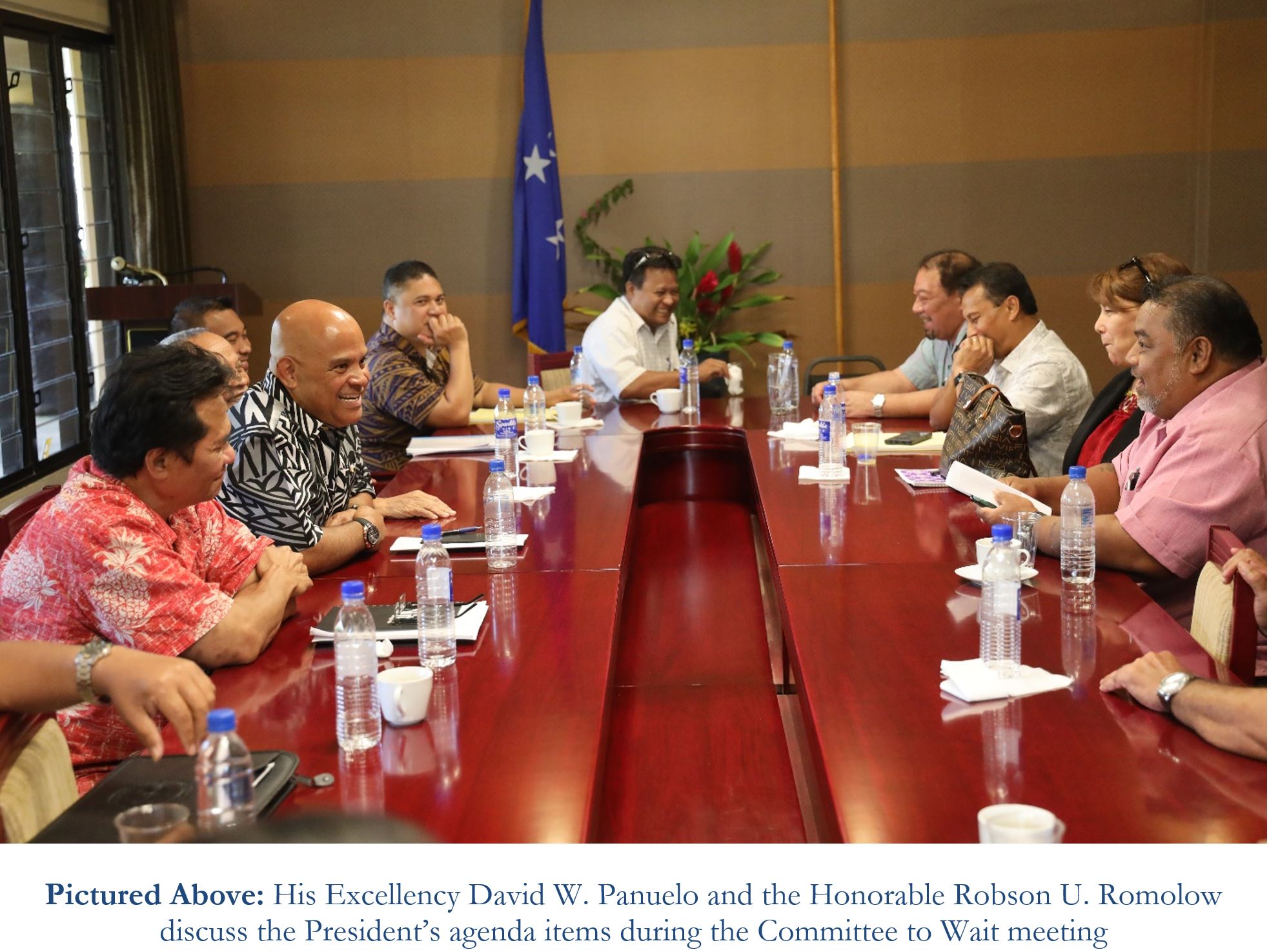 PALIKIR, Pohnpei—The 21st Congress of the Federated States of Micronesia (FSM) began its Third Regular Session on January 27th, 2020. After the opening session, His Excellency David W. Panuelo and the Honorable Yosiwo P. George received the Committee to Wait, chaired by the Honorable Robson U. Romolow, with committee members the Honorable Joseph J. Urusemal, the Honorable Aren B. Palik, and the Honorable Dion G. Neth, to discuss their agenda for this session of Congress.

The meeting began with the President informing the Committee to Wait on the Nation’s mass Measles vaccination campaign, and how the Department of Health & Social Affairs is, in close cooperation with the FSM’s State Governments, working to ensure that all vulnerable populations are up-to-date on their vaccines. “I think [approving the supplemental budget request for the Measles campaign] should be a priority item, because it’s about the health of our citizens,” President Panuelo said.

The second item on the agenda was discussion on the status of the 4th FSM Constitutional Convention, which is presently in recess until the middle to the latter part of February 2020. The President noted that the Executive Branch has submitted a proposed amendment to the law on the ConCon, which would clarify whether the Convention is to last up to 45 consecutive calendar days (i.e. every day, including this implemented recess and weekends, count as days) versus the Convention lasting up to 45 session days (i.e. every day that the Convention physically sits together and meets counts as days). Additionally, the President requested that if the Congress approves supplemental budget requests from the Convention that any request on public awareness funding be withheld, on the premise that public awareness is a function of the Executive Branch and a request for said funding is within the supplemental budget request.

The fourth item on the agenda was with regards to proposed pending legislation. President Panuelo described the importance of the FSM Petroleum Corporation/Vital Transformation Act as a means of enhancing the state-owned enterprise’s capacity, and further described his intention to discuss the proposed Foreign Investment bill with the FSM State Governors in February, and further during the next State & National Leadership Conference to be held in April or May.

The fifth item on the agenda concerned the Presidents’ remaining nominations for advice and consent positions, such as the Director of Personnel, FSM National Election Director, and the Public Defender. “If you can fund [the Personnel Director], we can nominate it,” President Panuelo said, noting that such a permanent Director of Personnel would be able to assist, among other matters, with finding the right candidates for the new Office of Veterans Affairs—which is presently funded for two fulltime positions.

The sixth agenda on the agenda concerned the revised revenue projection. Citizens may recall that the Executive Branch is legally obligated to provide the Congress of an updated revenue projection prior to any Regular or Special session so that funds may be appropriated. President Panuelo advised that, since the carryover audit has not yet been completed—it’s advised that it will be available in June 2020—the projection is conservative. Further, the original projection of 9.7 million has been updated to 12.1 million. “You need to know why it’s been revised…it’s based on [communications from the National Oceanic Resource Management Authority/NORMA and auditors], and I know they are conservative but…it’s good to be in the safe zone so that we don’t violate our own laws. By June or sooner both NORMA and our auditors can…give a clearer indication [on projected revenues].”

The seventh item on the agenda concerned the Executive Branch’s supplemental budget request in aggregate, which primarily focuses on large-scale projects such as the Measles campaign and securing a new office for the FSM’s Embassy in Tokyo (which must occur this calendar year due to an agreement with the current Embassy’s landlord), but also includes other items such as foreign service premiums for Foreign Service Officers.

The President was also quick to justify other requested supplemental funding, such as approximately $100,000 in overtime for crew serving the Nation’s ships and $600,000 in requested funding for MiCare, which would be immediately used to settle bills with vendors and providers.

“The reputation of our Government rests on our ability to pay workers’ the wages they’ve rightfully earned, and to be mindful of our obligations with private sector vendors and service providers,” President Panuelo said. “The bills won’t go away until we pay them, but more than just buying us services already rendered they buy us goodwill for the future.”

The meeting on a positive note, with the President reiterating his intention to have a close relationship with the Congress, ensuring that they are informed of every move the Executive Branch is making and why. “Please know that I really do think about Congress—you are my colleagues, and together we constitute the Leaders of our Nation,” President Panuelo said. “I have every confidence in you, and I will always work to ensure that you have every confidence in me. Our citizens deserve a Government that works together for their benefit.”

We have 1750 guests and no members online