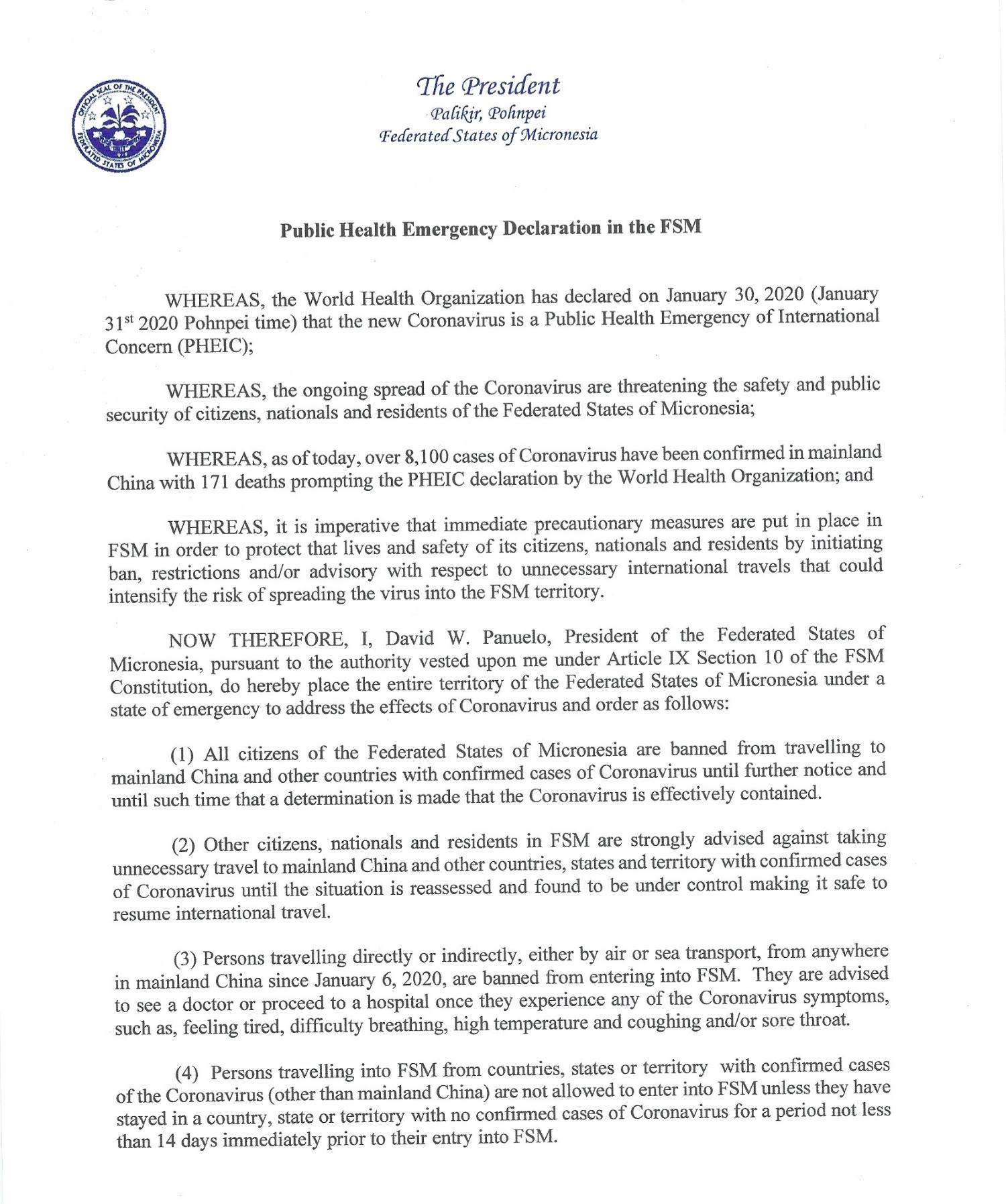 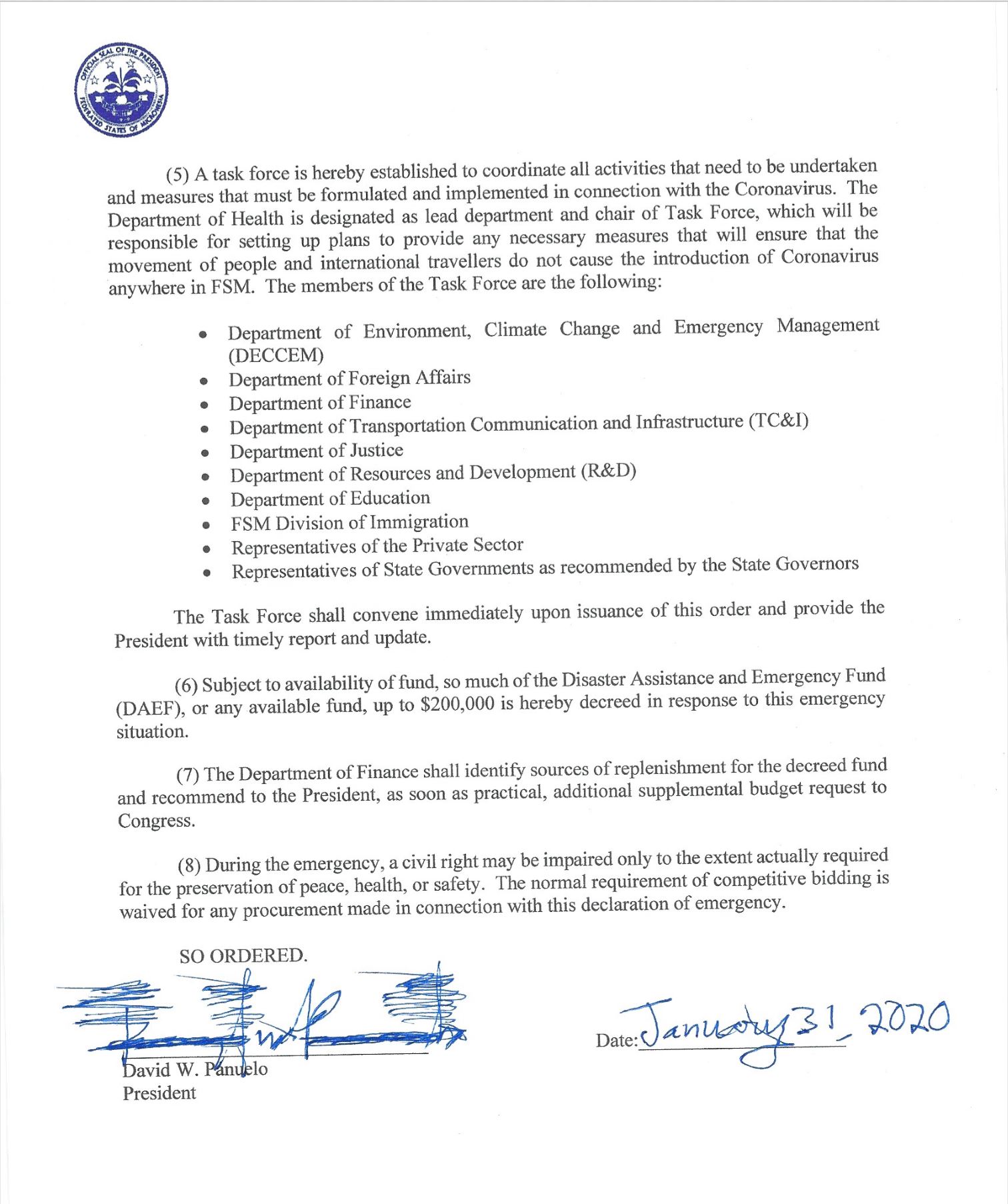 PALIKIR, Pohnpei—On January 31st, 2020 His Excellency David W. Panuelo, President of the Federated States of Micronesia (FSM) declared a State of Public Health Emergency to protect the Nation and its citizens from the new coronavirus, which can be found as a PDF here: https://gov.fm/files/January_31_2020-Public_Health_Emergency_Declaration_in_the_FSM.pdf

The purpose of the State of Public Health Emergency is to formally and immediately ban any entry to the FSM from travelers who reside in or have recently visited the People’s Republic of China (China), and similarly to ban any travel of FSM citizens or residents to China, in order to protect the Nation and its citizens from the new coronavirus. Further, all visitors, returning citizens, and residents, to the FSM will require a health form certifying that they do not presently show symptoms of the coronavirus, AND that they have resided in a coronavirus-free location for a minimum of fourteen (14) days.

The President, through the declaration of a State of Public Health Emergency, has established a taskforce to coordinate all activities that need to be undertaken, and amongst their duties will include the monitoring of individuals who arrive in the FSM for coronavirus symptoms.

“I will do whatever is necessary to protect our Nation and our citizens,” President Panuelo said. “Micronesians are renowned for their humility, respect and deference to others, and calm attitude towards challenges. The Government is aware that citizens have reacted to the existence and speedy propagation of this new virus with an alarm that could be described as out-of-character, and I believe that the cause for these concerns are predicated on citizens’ legitimate worries that this virus may ultimately reach our shores.”

“We will take every step available to make sure that Micronesians from Yap, from Chuuk, from Pohnpei, and from Kosrae are safe.”

On January 30th, President Panuelo wrote a letter to His Excellency Xi Jinping, President of China, providing the Nation’s condolences and sympathies to the people and Government of China, with whom the FSM has a Great Friendship.

“We are collaborating with the international community and partners such as the World Health Organization and the U.S. Centers for Disease Control & Prevention, and actively contributing our own efforts to help contain any further spread of this virus,” President Panuelo wrote. “I compliment you and your Government for taking proactive, bold, and crucial efforts to protect human lives.”

“As your Government progresses to rectify the suffering caused by this horrific phenomenon, I am confident that, under your able leadership, the people of China will overcome the continued spread of this new and deadly virus with courage and determination,” President Panuelo continued in his letter to President Xi. “Our sympathies go out to you and the families of those whose lives were tragically taken by this epidemic.”

President Panuelo also formally requested President Xi’s assistance to ensure that the FSM’s six students in Wuhan City are safe. The FSM Embassy in Beijing has been in constant contact with the students, who are safe and well-provided for but otherwise restrained to their university campus. The FSM Government and the Chinese Government have agreed that it is in the best interest of the students’ health and wellbeing that they remain precisely where they are. Other Pacific Islands, such as the Independent State of Samoa, have reached similar conclusions regarding their students in China.

On January 30th 2020—which, due to the World’s various time-zones, could be described as early morning on January 31st 2020 in the FSM—the World Health Organization declared that the new coronavirus is a Public Health Emergency of International Concern (PHEIC). This allows the World Health Organization to boost funding and resources to contain the threat posed by coronavirus, including resources to the FSM.

Meanwhile, in addition to enhanced surveillance at ports of entry, the FSM National Government’s Executive Branch has, where appropriate, been reprogramming resources and personnel to ensure the Nation is protected in the event of the virus’ arrival, and to take all possible measures to ensure the virus doesn’t reach the FSM in the first place. The State of Emergency the President has declared similarly allows the FSM National Government greater capacity to tackle the health threat.

On January 30th, 2020, President Panuelo submitted to the 21st Congress of the FSM a proposed Bill for an Act to appropriate an additional $301,478 from the General Fund of the FSM to fund the various activities of the National Government in response to the threats posed by the new coronavirus. The proposed bill for Congress’ action can be found here: https://gov.fm/files/Jan_30_2020_301478_-_Corono_Virus_budget.pdf

At the time of this release’s dissemination the FSM National Government is presently preparing formal communications to the FSM Congress, FSM Supreme Court, and FSM State Governments  with regards to the State of Public Health Emergency in the FSM.