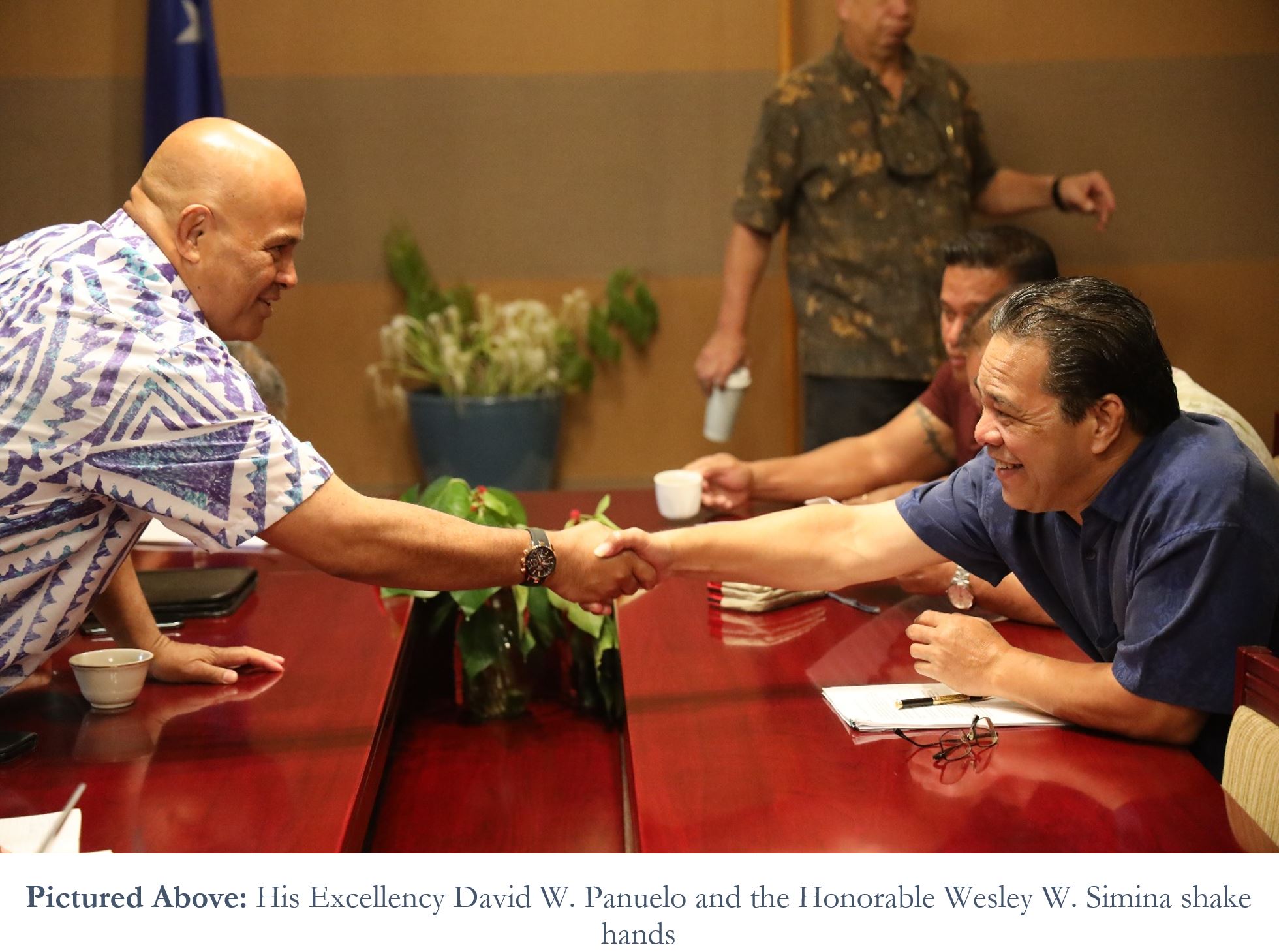 PALIKIR, Pohnpei—On February 4th, 2020 His Excellency David W. Panuelo, President of the Federated States of Micronesia (FSM), received the Honorable Wesley W. Simina, Speaker of the 21st FSM Congress, and other Members of Congress, to discuss the Public Health Emergency Declaration for the FSM. The primary outcomes of the meeting included suggestions that Congress may consider extending the declaration for an additional sixty (60) days (as opposed to letting the declaration expire after 15 days), while also seeking support from the Task Force setup by the Executive Branch to remove perceived constraints (e.g. allowing the receipt of human remains, which is crucial for Micronesian cultural practices), and assurances that cargo shipping and other economic stimuli are allowed to continue.

“Well Speaker, on behalf of the Cabinet we welcome you,” President Panuelo began, quickly getting to the business of describing the purpose of the Public Health Emergency Declaration and the Task Force setup to ensure the Nation’s protection. “For the sake of the country we are limiting exposure [to the nCoV 2019 coronavirus] and focusing on prevention. We have a clarification that we issued earlier and an amendment later today [authorizing FSM citizens to travel outward to other countries except the mainland of the People’s Republic of China].”

The President explained that the purpose of limiting all travelers to the FSM—including returning citizens and residents—to a 14-day (or one fortnight) stay in the U.S. Territory of Guam or the U.S. State of Hawaii is on the premise that neither location presently has the coronavirus, and 14 days is the recommended number, based on empirical evidence of previous outbreaks, to ensure that the incoming traveler is not affected by the virus.

The President further explained that there will be some exemptions for capacity-building personnel from the World Health Organization and the U.S. Centers for Disease Control & Prevention.

“My concern,” the President continued, “is that when a virus like this is introduced where there isn’t a vaccine that…our cultural practices [such the sharing of a sakau cup, and high-density communal living among families] would allow a quick spread of the virus.”

President Panuelo noted that a key element of the coronavirus Task Force is to heighten Water, Sanitation, & Hygiene (WASH) education throughout schools and communities.

The President further reiterated that the FSM Embassy in Beijing is maintaining contact with the Nation’s students in China, noting that the FSM Department of Foreign Affairs and the Chinese Government believe that it is in the students’ best interests to remain where they are.

President Panuelo also advised that he has requested MiCare to defray the costs of patients who are returning from trips to the Republic of the Philippines until such time that the Government can pay back MiCare for this additional financial burden.

“Thank you very much Mr. President,” began Speaker Simina. “On behalf of the Congress…we wanted to highlight some of the things we are concerned about. But first of all, I would like to thank you and your staff for taking the initiative on this very important issue for the health of our people.”

Speaker Simina noted that the FSM Constitution allows the President to declare an emergency for fifteen days, where it was later discussed that the Congress would consider voting to allow an extension of sixty days.

The Honorable Ferny S. Perman, Senator for the FSM State of Pohnpei, raised the question of whether there is an alternative to a 14-day stay in Guam or Hawaii for returning citizens and residents.

“Fourteen days is based on empirical evidence,” said Dr. Eunyong Ko, Country Liaison Officer for the World Health Organization to the FSM, noting that it’s up to individual countries to determine whether they choose to implement a travel advisory or a travel ban.

“My concern is the economic cost,” said Speaker Simina, referring not only to a potential loss in tourism but noting that students who were intending to visit the United States, but were barred from doing so, were unable to recoup approximately $50,000 in nonrefundable travel. (As of this writing on February 4th, 2020, FSM citizens departing the FSM are able to travel to all countries except for mainland China).

“We don’t want to ban [shipments of food, supplies, and fuel] to the FSM,” Speaker Simina continued.

“No,” said President Panuelo. “This is something that I’ve asked the [coronavirus Task Force] to review, so that we implement appropriate measures.”

The Honorable Victor V. Gouland, Senator for the FSM State of Chuuk, further spoke on the subject of ensuring the safe receipt of cargo. “Some citizens are worried that there if there is a ban on the ships and cargo…that businesspeople will jack up the price [of rice and other necessities].”

The Honorable Derensio S. Konman, Senator for the FSM State of Chuuk, described his views on the issue of the repatriation of human remains. “My main concern is that…there is one human remain that was stranded in Honolulu, to arrive in Chuuk yesterday, but because of the 14 days [quarantine/stay/waiting period] the remains are still there. I hope we can come up with [a solution] to distinguish human remains from travelers.”

“I will get further recommendations from the Task Force,” President Panuelo said. “Perhaps we can relax it where the remains can be shipped but the [human attendants accompanying the remains] cannot.”

Senator Perman further brought up the issue of quality public information outreach. “I noticed that the [Department of Health & Social Affairs] is using [FSM Telecommunication Corporation’s 777 service] a lot. I hope that you capitalize on using this for the coronavirus too…there is a lot of misinformation around in the FSM, really a lot because of social media. Really, that’s why people were lining up yesterday getting fuel and stocking up on rice.”

“I will have our PIO help disseminate to the states and everywhere so that we don’t go into a panic mode,” President Panuelo replied. “The travel restrictions are to protect our country from getting this virus, but everything else in terms of livelihood will be the same.”

The meeting ended on a positive note, with President Panuelo and Speaker Simina agreeing to remain in close communication to ensure the positive implementation of the Public Health Emergency for the FSM.

For more information on the nCoV 2019 coronavirus, please contact:

We have 576 guests and no members online