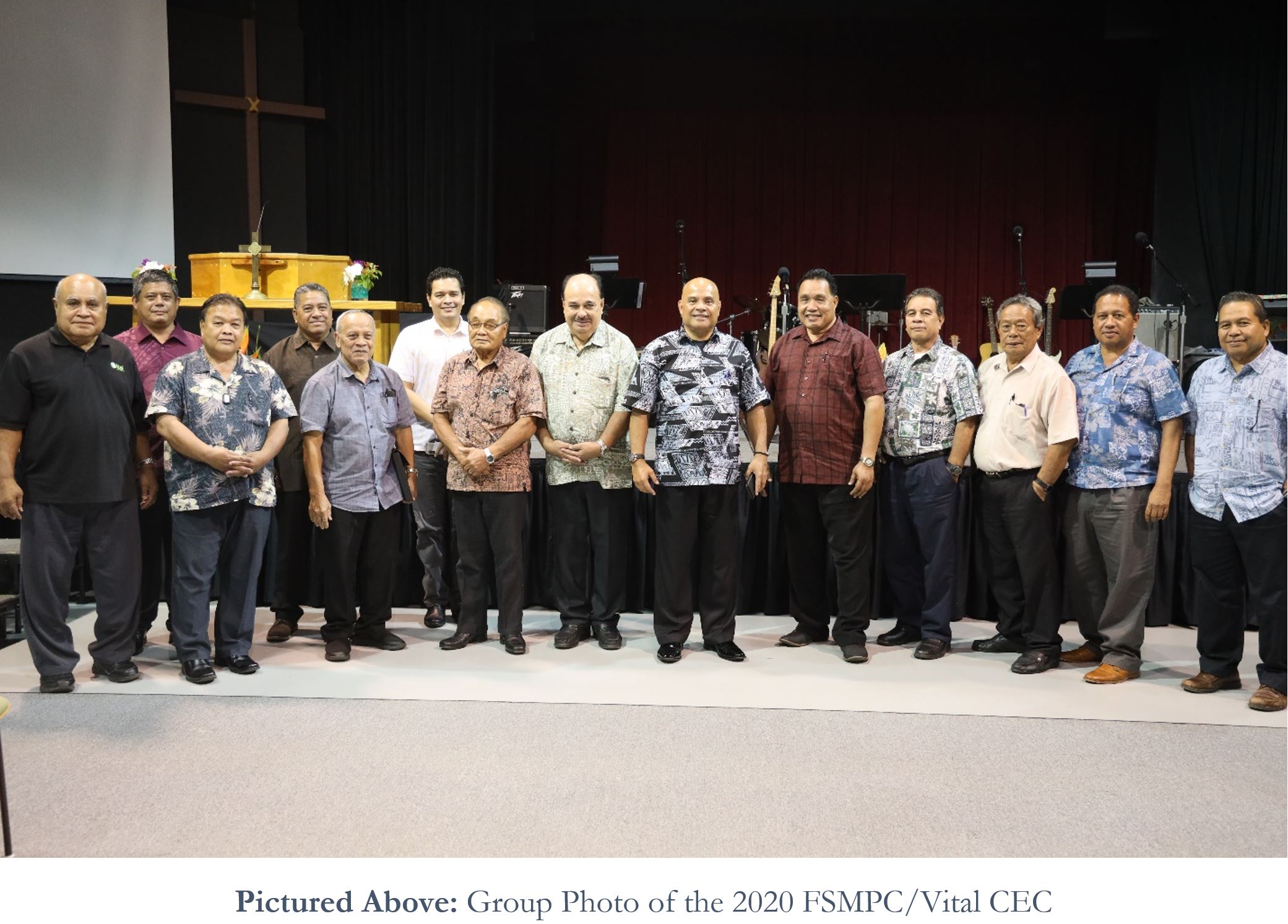 The President and the Governors began the CEC with opening remarks. “I just want to open with saying that, as a country,” President Panuelo said, “I believe that everything we do in the area of economic development must be in harmony with our environment because our environment truly sustains us. [FSMPC/Vital] has already transformed from its origins [in Public Law 15-08] as an entity that was supposed to stabilize the price of fuel, to better facilitate the buying, selling, exporting, manufacturing, and processing of copra and other coconut tree products with the FSM through [Public Law 18-68, also known as the ‘Coconut Tree Act’]. The FSMPC Transformation Act would further evolve their mandate to focus on renewable, sustainable, and clean energy. I encourage the [CEC] to deeply consider the merits of such legislation and how it would positively impact development in your State and in our Nation.”

“The development needs for each of the [FSM] States must be recognized,” Governor Elimo began. “I am thankful to you Mr. President for honoring our request to…come together and discuss the unique issues [that each of our states face]. …[Today] we are going to discuss another effort of our Nation in promoting the [FSMPC/Vital], which is a vitally important aspect of our Nation and its unity…[as we] forge our way forward.”

The Governors of Kosrae, Pohnpei, and Yap shared similar remarks on the importance of national unity and the duty of the CEC to oversee and support FSMPC/Vital.

In the past decade, FSMPC/Vital has reduced the price of gasoline approximately $1.40 at the pump, with approximately 80 million dollars in financial benefits to the Nation. These equate to 14 million in debt repayments; 15 million in cash, inventory, and stock; 10 million in risk mitigation and assets; and 42 million to people in the form of passing on savings at the pump.

Leaders queried how FSMPC/Vital passes on savings to citizens.

CEO Jared Morris explained that FSMPC/Vital is a wholesaler that tries to sell as low as it can. “Whether that benefit is then passed on from a business to a community, that’s not our call to make. We don’t run a service station and don’t know the cost of operating a service station…that being said, the fuel prices are amongst the most [visible benefit to citizens]…. There is a strong pressure from consumers [for affordable gasoline].”

CEO Morris further explained that having very stable prices allows Governments and citizens to reliably make appropriate budgets, which is evidenced by the FSM’s gasoline price stability when compared to, say, the U.S. Territory of Guam. While in some years the FSM is cheaper than Guam’s gasoline (e.g. in 2017), the key idea is gasoline prices in Guam and elsewhere are highly volatile whereas prices in the FSM are not. Stability in fuel prices was FSMPC/Vital’s original mandate, and in this respect the FSM National Government recognizes them as being highly successful.

“Energy security is very important to our country,” President Panuelo said, followed by the CEC at large challenging the Board to not become complacent, but rather, to consistently improve upon the corporate systems and processes to ensure continued successful performance into the future. CEO Morris noted that FSMPC/Vital would benefit from instructions on how to ration fuel, if necessary, in the event of a national emergency. The CEC agreed, per FSMPC/Vital’s request, to provide guidance on a Product Rationing Policy.

Perhaps the most notable major outcome to follow—as much of the discussions were informational briefings that don’t require action by the CEC—were the CEC’s profound support for FSMPC/Vital’s 2025 Strategic Plan, including projects such as: the National Oceanic Marine Resource Authority’s Marine Bunker Initiative; the Coconuts4Life Initiative (i.e. the Integrated Coconut Processing Facility in Tonoas Island in Chuuk State), and the Nation’s coconut export potential; the non-FSM related revenue initiatives including expansion into Guam, the Republic of Nauru, and potentially American Samoa; and the aforementioned Congressional Bill 21-06 for the FSMPC/Vital Transformation Act.

The CEC ended on a positive note, with Leaders reaffirming the need for the CEC to meet on an annual basis.