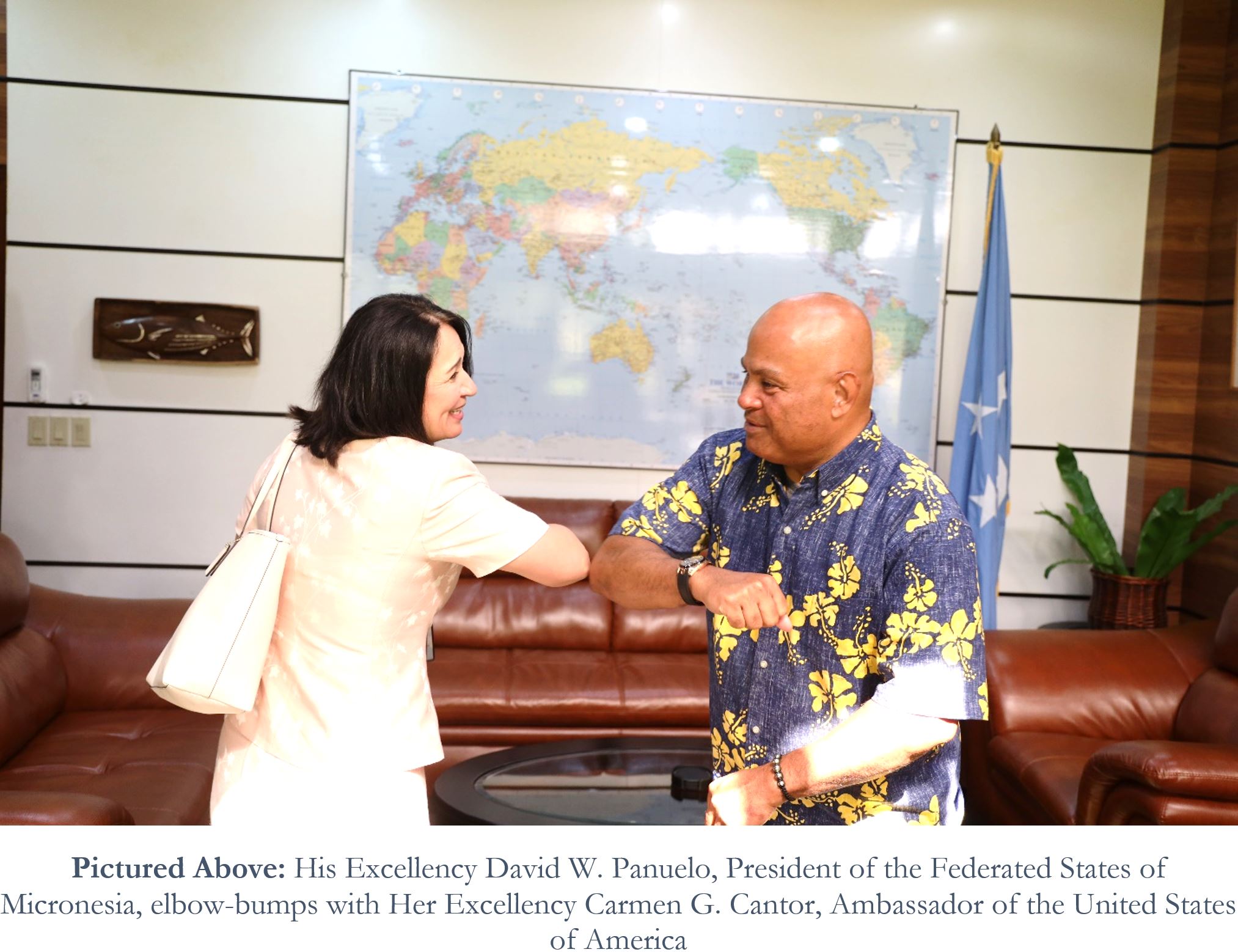 PALIKIR, Pohnpei—On April 20th, 2020, His Excellency David W. Panuelo, President of the Federated States of Micronesia (FSM) received Her Excellency Carmen G. Cantor, Ambassador of the United States of America, in a courtesy call. The purpose of the meeting was to officially inform President Panuelo that the U.S. has chosen its negotiators for the ongoing negotiations on the Compact of Free Association, as Amended. Representing the U.S. in the negotiations is the Honorable Karen Stewart, former Ambassador of the U.S. to the Republic of the Marshall Islands (RMI), and the Honorable Douglas Domenech, Assistant Secretary for Insular & International Affairs at the U.S. Department of Interior.

The meeting began with President Panuelo thanking the Ambassador for the recent arrival of COVID-19 test kits, and expressing his sympathies to the U.S. for the effect the COVID-19 Pandemic is having on the Nation’s first and foremost ally. “I understand that there are more than seven hundred thousand (700,000) infected and more than forty thousand (40,000) dead,” the President said. “We say our prayers and wish that this [Pandemic] would turn around and subside as quickly as possible.”

President Panuelo and Ambassador Cantor also briefly discussed the Economic Stimulus Package passed by the 21st FSM Congress, and the incoming financial assistance from the U.S.—whether it’s in the form of the Nation’s partnership with the U.S. Department of Labor or in the form of the seven million and seven hundred thousand dollars ($7,700,000) of Technical Assistance Program (TAP) funding via the Coronavirus Aid, Relief, & Economic Security (CARES) Act.

“We’re in this together,” Ambassador Cantor said. “We’re working very hard to make sure that we provide as much assistance [as possible].”

The discussion then segued to its core purpose regarding who would be representing the U.S. as their negotiators for the ongoing negotiations with the FSM on the Compact of Free Association, as Amended. Ambassador Cantor advised President Panuelo that the Honorable Karen Stewart, former Ambassador of the U.S. to the RMI, would be one of the U.S.’ two negotiators.

To the knowledge of the FSM National Government, Ambassador Stewart has a background in economics and more than forty years of diplomatic experience, including Ambassadorships in the RMI, Laos, and Belarus, with foci on economic development and human rights. The Ambassador speaks Thai, Russian, and Lao, and has a reputation as a champion for Micronesians across the Freely Associated States (FAS).

Ambassador Cantor then advised President Panuelo that the Honorable Douglas Domenech, Assistant Secretary of Insular and International Affairs at the U.S. Department of Interior, would be the second of the two U.S. negotiators.

To the knowledge of the FSM National Government, Assistant Secretary Domenech has a background in Forestry and Wildlife Management, with his first career in the private sector’s timber industry and his second career of more than twenty years in public service, primarily at the U.S. Department of Interior under the administrations of former U.S. President George W. Bush and contemporary U.S. President Donald J. Trump, with the years in-between serving in a thematically similar capacity for the Government of the U.S. State of Virginia as the Secretary of Natural Resources.

“Thank you for the information you provided today,” President Panuelo said. “I am really happy with the two individuals the U.S. has chosen…and I am confident about this negotiation process. Ever since our meetings with my friend [the Honorable Michael “Mike” Pompeo, Secretary of the U.S. Department of State], this has been rolling and getting very exciting. It’s particularly nice to have some very good news during these times.”

Following the meeting with the President, Ambassador Cantor paid a courtesy call to inform the JCRP, the FSM's designated negotiating body, of the selection of U.S. negotiators.

JCRP Chairman Asterio R. Takesy and Chief Negotiator Leo A. Falcam, Jr., on behalf of the Committee, thanked the Ambassador for this welcome news. They reiterated the JCRP’s desires to complete negotiations at the earliest opportunity. In this regard Ambassador Cantor indicated that the U.S. has “recommended” an ambitious schedule for the talks, with the tentative hope that an agreement can be transmitted to the U.S. Congress for its consideration no later than January 2021.

She indicated that the current COVID-19 Pandemic would require changes from the normal face-to-face sessions, at least initially. Work would begin immediately on arriving at mutually agreeable teleconferencing logistics.

The sides also discussed ongoing joint efforts to complete an inventory of U.S. federal programs extended to the FSM, and expressed a desire that this could be completed no later than the end of May.

The FSM and the U.S. share an Enduring Partnership based on shared values. It is the view of the FSM National Government and its negotiating body, the JCRP, that the news of the official negotiators representing the U.S. in the ongoing discussions on the Compact of Free Association, as Amended, are a positive step in the continued efforts of the FSM and the U.S. to further strengthen and deepen our bilateral treaty relationship.

We have 380 guests and no members online