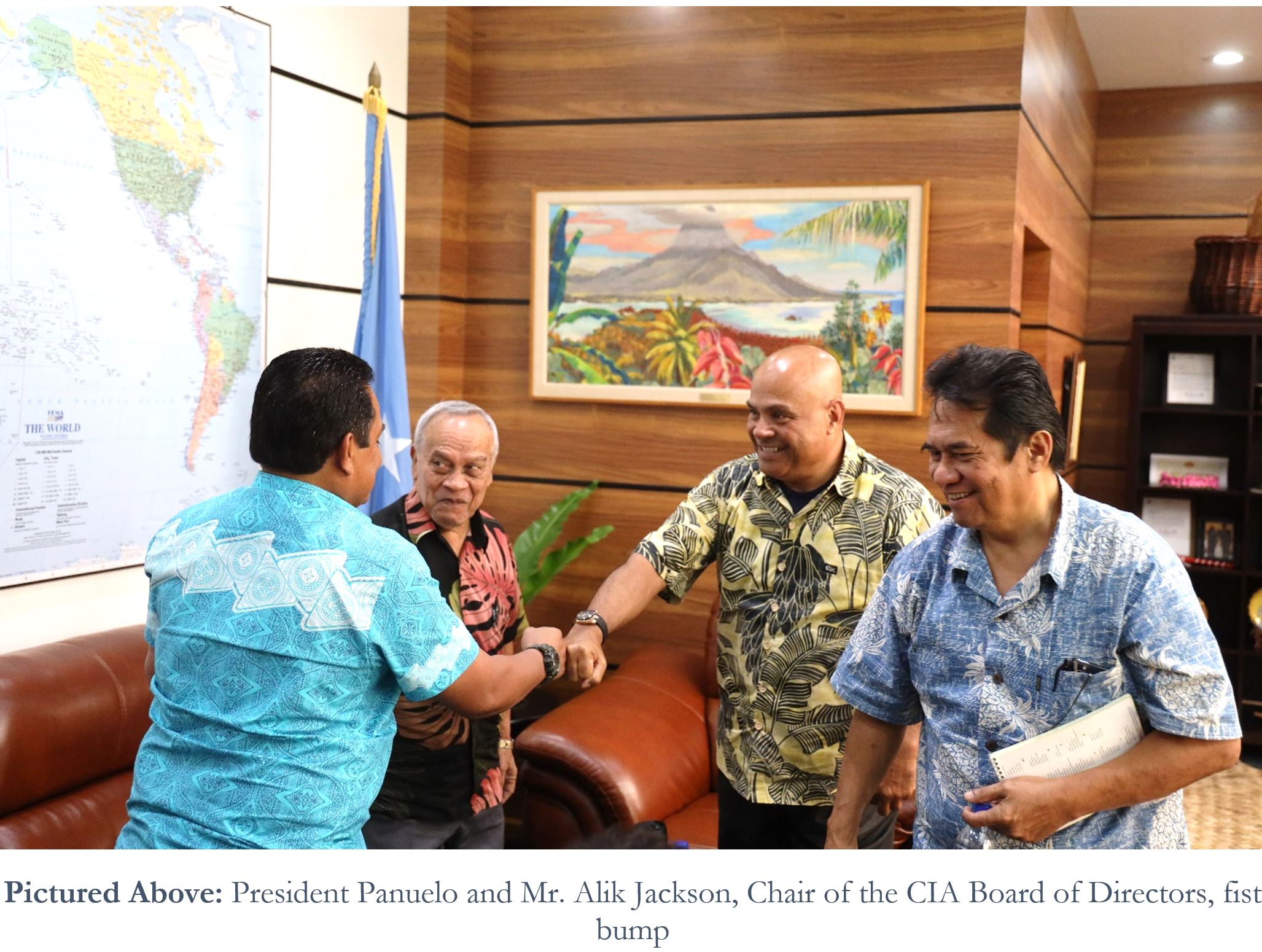 PALIKIR, Pohnpei—On May 7th, 2020 through a letter dated May 5th, 2020 His Excellency David W. Panuelo, President of the Federated States of Micronesia (FSM) formally requested Caroline Islands Air (CIA) to relocate “all aircrafts and crew members from Yap [State]” to Pohnpei State no later than May 31st, 2020. The purpose of this request is to ensure that CIA is able to continue to “provide emergency responses for medical emergencies to the other FSM States”, among other reasons.

The President noted in his letter to CIA’s Chief Executive Officer, Mr. Alex Tretnoff, that the Nation will “work with the Pacific Missionary Aviation to provide similar emergency services in Yap State.”

As a State-Owned Enterprise (i.e. a Government-owned corporation) like FSM Petroleum Corporation/Vital and the FSM Telecommunications Corporation (FSMTC), CIA is designed to offer essential services to the Nation whilst also operating relatively independently.

Unlike other FSM corporations that began their life as a fully State-Owned Enterprise, such as Caroline Fisheries Corporation (which now has substantial private ownership), CIA remains 100% under the ownership of the FSM National Government and, by extension, every citizen in the Nation. The President highlighted his concerns regarding a need to strengthen CIA’s operational structure. “I wanted to bring you in,” President Panuelo began, “To see how we can work together. Ever since I was a Senator, it’s been my view that [CIA] needs to be improved in many respects. Today, our COVID-19 Response Framework would be more resilient if our remote island air service were strengthened.”

It was noted that, while CIA receives an annual financial audit, its last performance audit was in 2010. This 2010 performance audit recommended the hiring of additional staff, including a full-time Chief Financial Officer or thematically equivalent position to eliminate any potential conflict of interest that may exist in the administration of the corporation’s financial operations. The performance audit also noted that only one individual was serving in the roles of Chief Executive Officer, Pilot, and Mechanic.

It was again noted in the April 30th, 2020 meeting that Mr. Tretnoff is presently serving in three roles—that of the CIA’s Chief Executive Officer, Pilot, and Mechanic—and that such a workload, particularly during the COVID-19 Pandemic, might jeopardize the Nation’s capacity to provide essential services to its citizens.

“I see so much need for these two positions,” said Mr. Kyoshi Phillip, Member of the Board of Directors representing the FSM National Government, referencing the need for a full-time Chief Executive Officer and Chief Financial Officer. Mr. Phillip advised that these positions would assist with, among other things, ensuring CIA is able to carry out its mandate effectively—to include ensuring that its financial reports are sufficiently transparent and detailed to allow the Chief Executive Officer to make appropriately informed executive decisions.

“If you look at our reports that we issue through our contracted [Certified Public Accounting] firm,” said Mr. Haser Hainrick, National Public Auditor, “There are a lot of adjustments made in order for the numbers to be booked into the financial statements. That in itself is an indication that the accounting at the corporation really needs to be strengthened.”

When the Board of Directors asked the President and Vice President if it would be appropriate or allowable for the Board to work with the Office of Personnel to publish job announcements for CIA, the President advised he would support the corporation using the Office of Personnel for this purpose on the premise that the State-Owned Enterprise does not presently have the capacity to satisfyingly accomplish this task on its own.

It was also described in the meeting that, historically, the Secretary of the Department of Transportation, Communication & Infrastructure served as an ex-officio member (i.e. someone who serves on the Board by virtue of their office.) This was subsequently changed in Public Law 16-26, where the Secretary’s role as an ex-officio member was replaced to allow the Chief Executive Officer to serve that function.

The President and the Board of Directors agreed to work together to see how the Secretary of the Department of Transportation, Communication & Infrastructure could return to serving as an ex-officio member of the Board.

The meeting concluded with the President and the Board of Directors agreeing to increase their collaboration in their joint efforts to enhance and improve the Nation’s air service.

We have 256 guests and no members online