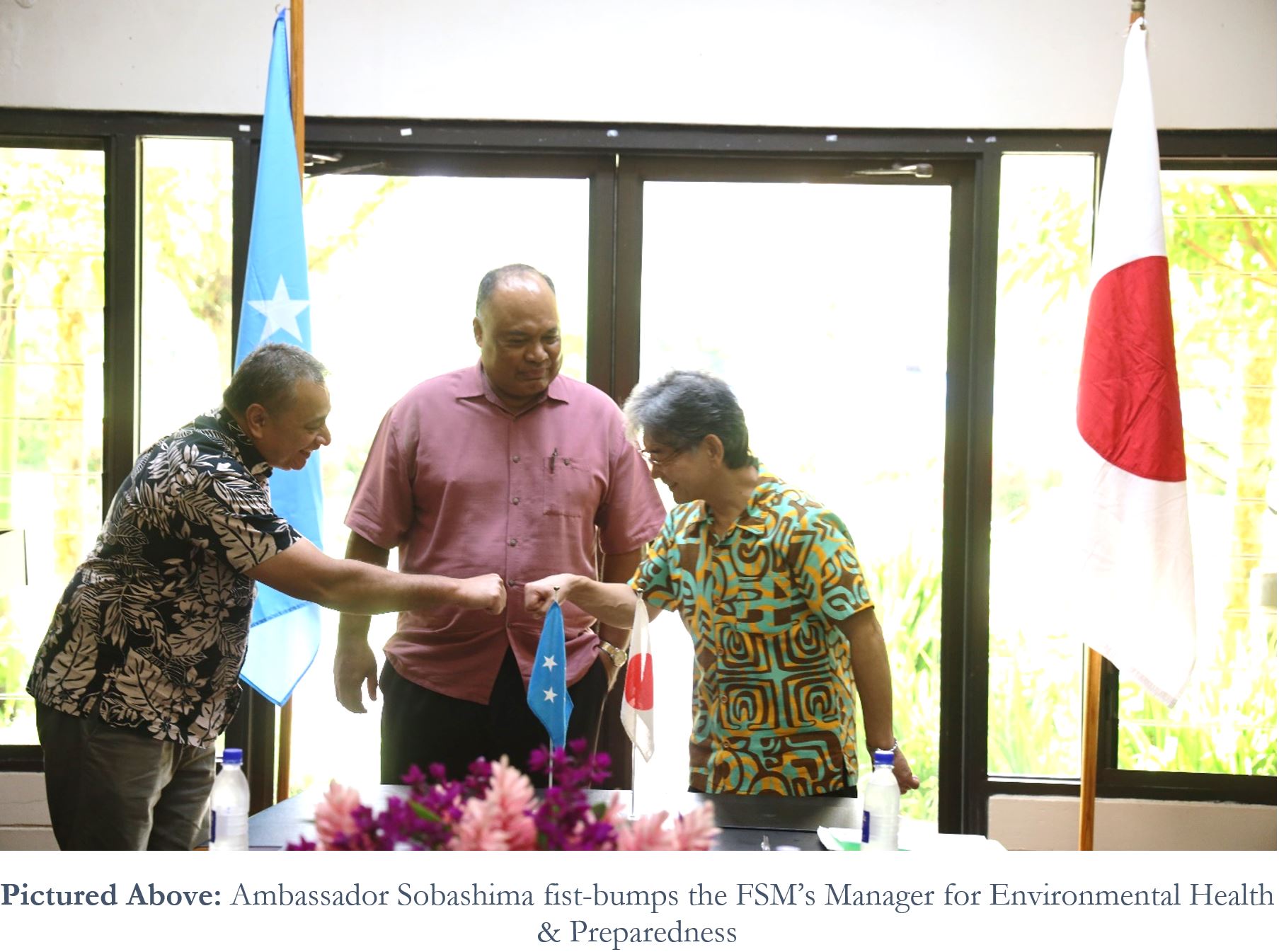 PALIKIR, Pohnpei—On June 12th, 2020 the Honorable Kandhi Elieisar, Secretary of the Department of Foreign Affairs, received His Excellency Hidenobu Sobashima, Ambassador of Japan, in a signing ceremony for Japan to offer the Federated States of Micronesia (FSM) 382 million Japanese Yen (approximately $3,500,000) for the procurement of medical equipment. Also in attendance at the ceremony was Mr. Moses Pretrick, the Department of Health & Social Affairs’ Manager for Environmental Health & Preparedness.

Citizens may recall that in November 2019, His Excellency David W. Panuelo, President of the FSM, was received by His Excellency Shinzo Abe, Prime Minister of Japan. Amongst the topics discussed in their meetings, such as the FSM’s request for Japan’s assistance expanding Pohnpei State Port’s commercial and fisheries docks, and the FSM’s explicit support for Japan’s candidature to join the United Nations Security Council in 2022 (as well as support for Japan’s permanent placement on the Security Council if and when it is reformed), Prime Minister Abe stated that Japan would strengthen its support to the FSM’s sustainable economic and social development.

“The infectious disease of COVID-19 that has been rapidly spreading in various places of the world is now threatening not only the lives of human beings, but also their economic and social activities, and their dignity,” Ambassador Sobashima said in his remarks at the June 12th signing ceremony. “The current situation should be described as a human security crisis.”

“Under the current crisis,” Ambassador Sobashima continued, “where the countries with vulnerable health systems are facing particularly large impacts, we would like to emphasize the importance of strengthening health systems in addition to specific countermeasures for the patients. With these considerations and in view of the needs of the [FSM], Japan will offer this time the cooperation of grant assistance amounting to 382 million Japanese Yen or about 3.5 million U.S. dollars for the procurement of medical equipment made in Japan.”

Ambassador Sobashima noted his hope that this cooperation will help the FSM win the fight against COVID-19.

In his remarks, Secretary Elieisar said: “It is my certainly my privilege and honor…to receive this very generous offer from your Government to enable us to combat COVID-19. It has been said again and again that the only way to combat this Pandemic is to unify ourselves to work together in solidarity. …There is no question, Ambassador, that my Government is so grateful to be able to receive this generous assistance between our two countries.”

“We will continue to bless our cooperation and friendship based on the Kizuna or Special Bond that we have between our two countries. Thank you very much, and domo arigato,” Secretary Elieisar said.

We have 625 guests and no members online