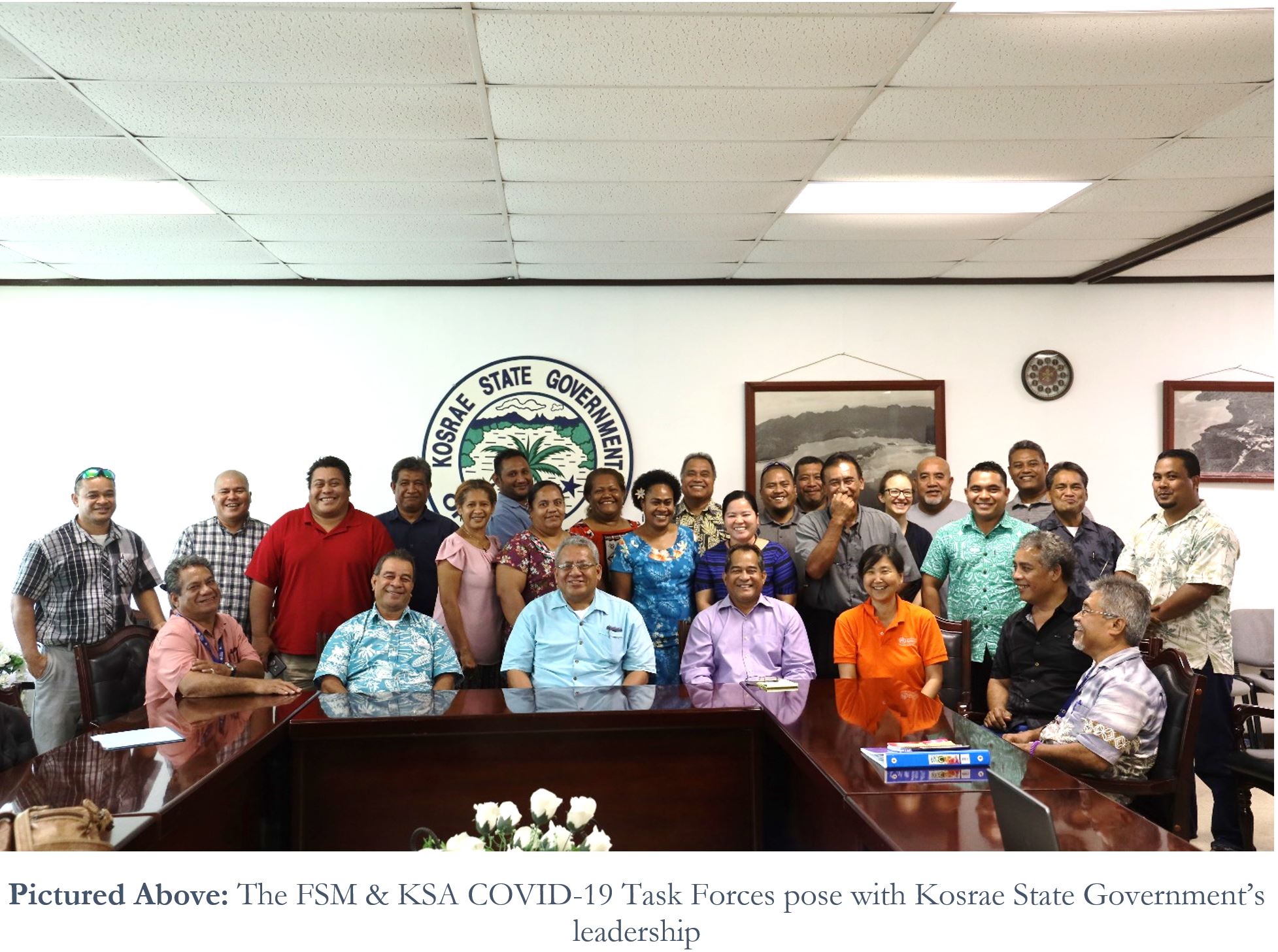 TOFOL, Kosrae—From July 18th to 22nd, 2020, the Federated States of Micronesia’s (FSM’s) COVID-19 Task Force extended its stay in the State of Kosrae, per the Government’s request, to assist in additional readiness and simulation exercises to help prepare the State for the repatriation of its residents. Amongst the tasks completed included contact tracing workshops, community empowerment exercises, and several simulation exercises. This release will primarily relay the updated strengths and weaknesses discussed in the July 22nd debriefing for the State’s Point of Entry, Quarantine, and Isolation sites.

Citizens only interested in knowing when Kosrae will reopen for repatriating its residents are advised that, although the date is still unknown, significant progress has been made towards improving the State’s capacity. “I think you can open soon, and it will be your decision when,” the Honorable Livingston A. Taulung, Secretary of the Department of Health & Social Affairs, said in the Task Force’s debriefing to the Honorable Carson K. Sigrah, Governor of the State of Kosrae. “Many of the biggest gaps identified last week have either been addressed or are actively being addressed by your team.”

Another strength at the Point of Entry was the successful use of the Incident Command Structure, which is functionally a phone-tree to ensure successful communications between the various attending parties.

The Quarantine Site (Kosrae High School) demonstrated significant gains over previous exercises. “If I had to use terms to compare today with the last exercises,” said Mr. Ari Skilling, “it would be ‘Confidence’ and ‘More informed.’ Operations-wise, the Quarantine Site has a lot of the Standard Operating Procedures written on paper and used in practice. …This time around, communication was much improved…today we had EIGHT health personnel instead of TWO…and we maximized the available rooms without compromising on space.”

Mr. Skilling noted in the debriefing to Governor Sigrah that the Quarantine Site had prepared a standardized welcome script, as well as welcome kits inclusive of documentation on the Quarantine Site’s rules and procedures, maps of where facilities were, contact information for assistance, and physical goods such as a hygiene bucket, a comfort blanket, and home touches such as Kosraean tangerines. “Ms. Patricia displayed efficient use of all of her staff—each staff was dedicated to a specific passenger where they were escorted without making contact,” Mr. Skilling said. “She later called the entire security detail to gather at a designated doffing area, where everyone monitored each other for proper doffing procedures. Now it’s just a matter of ironing out the finer details.”

It was advised that a significant improvement was that the Quarantine Site team installed an onramp directly in front of the briefing area, greatly assisting the State’s capacity to successfully provide for repatriating residents with physical disabilities.

Regarding the Quarantine Site’s gaps, it was noted that one simulated passenger who was role-playing disorderly conduct was mistakenly treated the same as a PUI.

“A person classified as a PUI has symptoms consistent with COVID-19,” said Dr. Eliaser Johnson, the FSM’s epidemiologist. “We ought not to mix someone with disorderly conduct with a PUI, in part so that we don’t run the risk of exposure.”

Mrs. Margaret Baekalia-Santos, the FSM’s Microbiologist, described the Isolation Site’s strengths and weaknesses. Mrs. Baekalia-Santos advised that the strengths of the Isolation Site included the successful use of the Incident Command Structure, appropriate steps for donning and doffing of personal protection equipment (PPE), identified areas to don and doff PPE, and temporary color-coded zoning of green, yellow, and red zones. The laboratory was involved in picking up samples from the Isolation Site.

The gaps identified in the Isolation Site focused primarily on the doffing of PPE, and proper disinfection of the ambulance. “There still needs to be more infection prevention control training, donning and doffing training, and handwashing training,” Baekalia-Santos said. “That said, today was much improved. I am happy, it’s actually a very big improvement.”

Other than the simulation exercises on July 18th and 22nd, the Task Force also conducted a series of community engagements with the Mayors of the Municipalities of Malem, Tafunsak, Lelu, and Utwe, as well as a series of contact tracing and PPE donning and doffing trainings, among others.

We have 357 guests and no members online