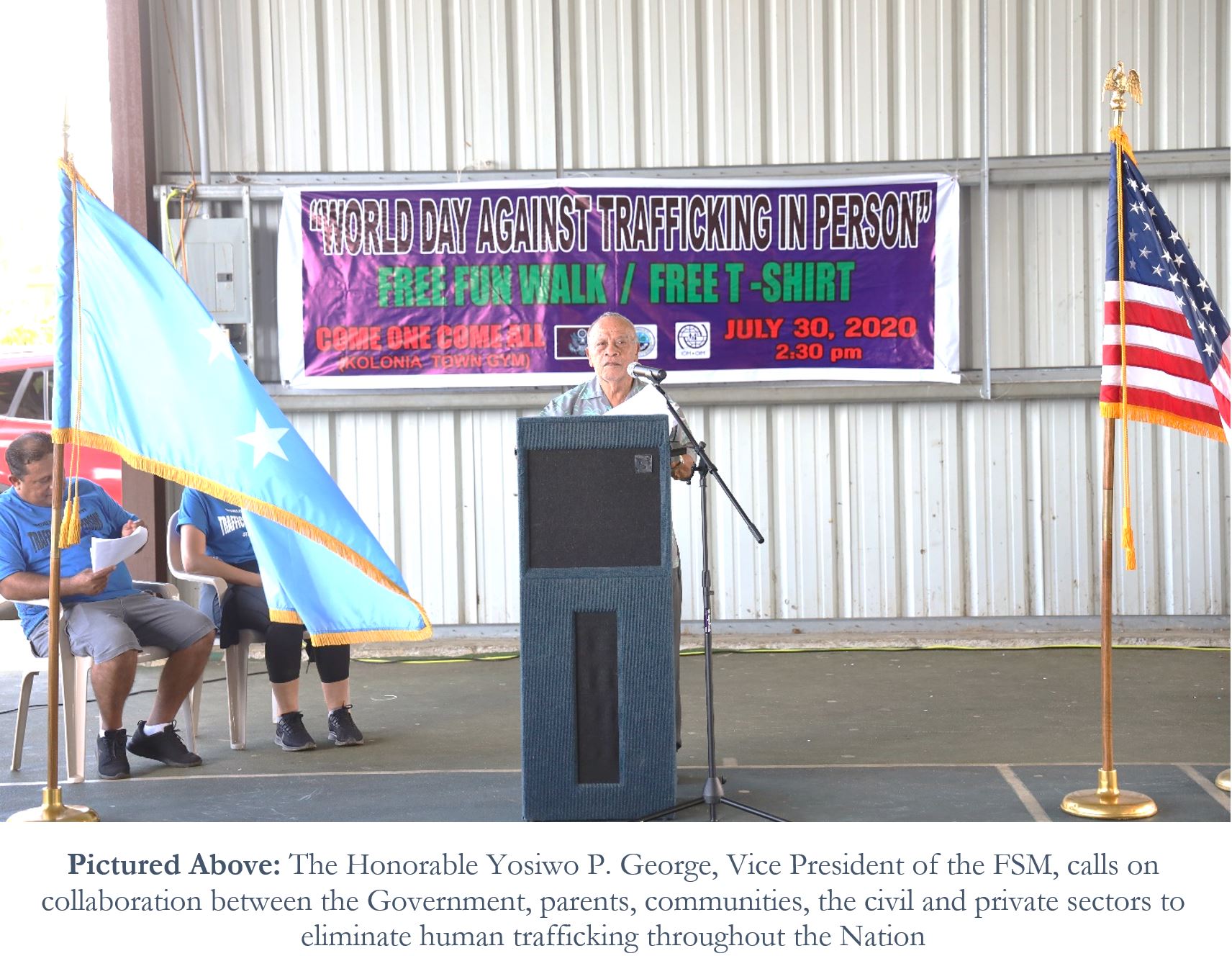 PALIKIR, Pohnpei—On July 30th, 2020, the Federated States of Micronesia (FSM) formally recognized and participated in the 7th annual World Day Against Trafficking in Persons. Operating on the theme “Committed to the Cause—Working on the Frontline to End Human Trafficking,” the international day emphasizes the importance of combatting the threat of human trafficking across the globe. Although the FSM prides itself as a Nation committed to extending peace, friendship, cooperation, and love in our common humanity to all peoples and nations throughout the world, the FSM National Government recognizes that one of the ways of demonstrating this commitment domestically in the States of Yap, Chuuk, Pohnpei, and Kosrae is to ensure that Micronesians are safe from the use of force, fraud, coercion, and exploitation.

Following a series of speeches from the Honorable Yosiwo P. George, Vice President of the FSM, Her Excellency Carmen G. Cantor, Ambassador of the United States of America to the FSM, and Mr. Lino Amor, Assistant Secretary heading the Division of Anti-Human Trafficking in the FSM Department of Justice, the FSM National Government and Pohnpei State Government, in cooperation with the U.S. Embassy in Kolonia and the International Organization for Migration (IOM), held a fun-walk across Pohnpei’s capital of Kolonia as a visual demonstration of the Nation’s commitment against individuals and organizations practicing the trafficking of persons.

“Today, we thank the first responders who work tirelessly for this cause but whose work is often overlooked and unrecognized,” Vice President George said, emphasizing the crucial role the Division of Anti-Human Trafficking plays in its cooperation with State and Municipal police forces, the United States of America, Japan, Australia, and IOM to combat human trafficking.

“I encourage all mothers and fathers,” Vice President George continued, “to play an active and engaged role in being responsible for their children, being very careful to guide their children in making the right choices, and being physically, emotionally, and mentally present in their children’s lives. Collaboration and cooperation between Government, families, communities, and the civil and private sectors are key to keeping our Nation safe, and loving parents are essential to this.”

“Human trafficking is the use of force, fraud, exploitation, or coercion to obtain labor or sex from victims,” Assistant Secretary Amor said in his statements. “While the majority of victims are usually female, it can happen to anyone including men, women, boys, and girls. It is a multi-billion dollar industry world-wide and, yes, it unfortunately exists here in the FSM.”

Since 2017, the Department of Justice has prosecuted three human trafficking cases; provided immediate and long-term service to victims who were minors; hosted an anti-trafficking conference in Pohnpei with over 150 participants from all four FSM States; opened a victim shelter in the State of Chuuk; and selected a location for a similar shelter in Pohnpei. In September 2019, the Panuelo-George Administration restructured the Department of Justice to add the new Division of Anti-Human Trafficking, whose primary function is to mitigate and eliminate this threat to the FSM.

Citizens may recall the FSM’s commitment to the Indo-Pacific Strategy, which is a broad political and security strategy inclusive of the Nation’s cooperation with the United States, Japan, Australia, and other partners to uphold the Pacific’s security. While this is often projected to emphasize the Nation’s commitments against illegal, unreported and unregulated (IUU) fishing and broadening environmental protection measures, protecting citizens from exploitation is an equally crucial component. In the context of the FSM, the Nation has been increasingly identified as a location for human trafficking.

“As a Micronesian and as a Pohnpeian, when I read the recent human trafficking report on the FSM,” President Panuelo said in a statement following the fun-walk, “of course I was both humbled and even embarrassed. ‘Paradise in Our Backyards’ is the term the Panuelo-George administration uses to emphasize our commitment to environmental conservation, but it must also mean with equal emphasis our commitment to human rights. All citizens and residents of the FSM, whether they are Micronesians from Yap, Chuuk, Pohnpei, or Kosrae, or expatriates from the Republic of the Philippines and other countries, have the right to be safe from the use of force, fraud, exploitation, and coercion. I echo Vice President George’s call for parents and communities to be responsible for their children, and on behalf of the Government the Panuelo-George Administration will be calling upon the Nation’s friends, allies, and development partners for additional assistance in this area.”

“The FSM National Government,” President Panuelo continued, “recognizes the attendance of not only Ambassador Cantor and IOM at the World Day Against Trafficking in Persons, but also the attendance of His Excellency Hidenobu Sobashima, Ambassador of Japan to the FSM, and the Honorable Vy Duong, chargé d'affairesof the Australian Embassy to the FSM. The FSM National Government is proud to cooperate with the United States, Japan, Australia, IOM, and other partners in eliminating human trafficking from our Nation.”

Citizens of the FSM can play their own part in combatting human trafficking by keeping the FSM National Government informed on suspected cases of force, fraud, exploitation, or coercion to obtain labor or sex from victims. Through partnership with the FSM Telecommunications Corporation (FSMTC), any citizen or resident of the FSM can call the FREE anti-human trafficking hotline by dialing H-E-L-P or 923-2000.

We have 274 guests and no members online