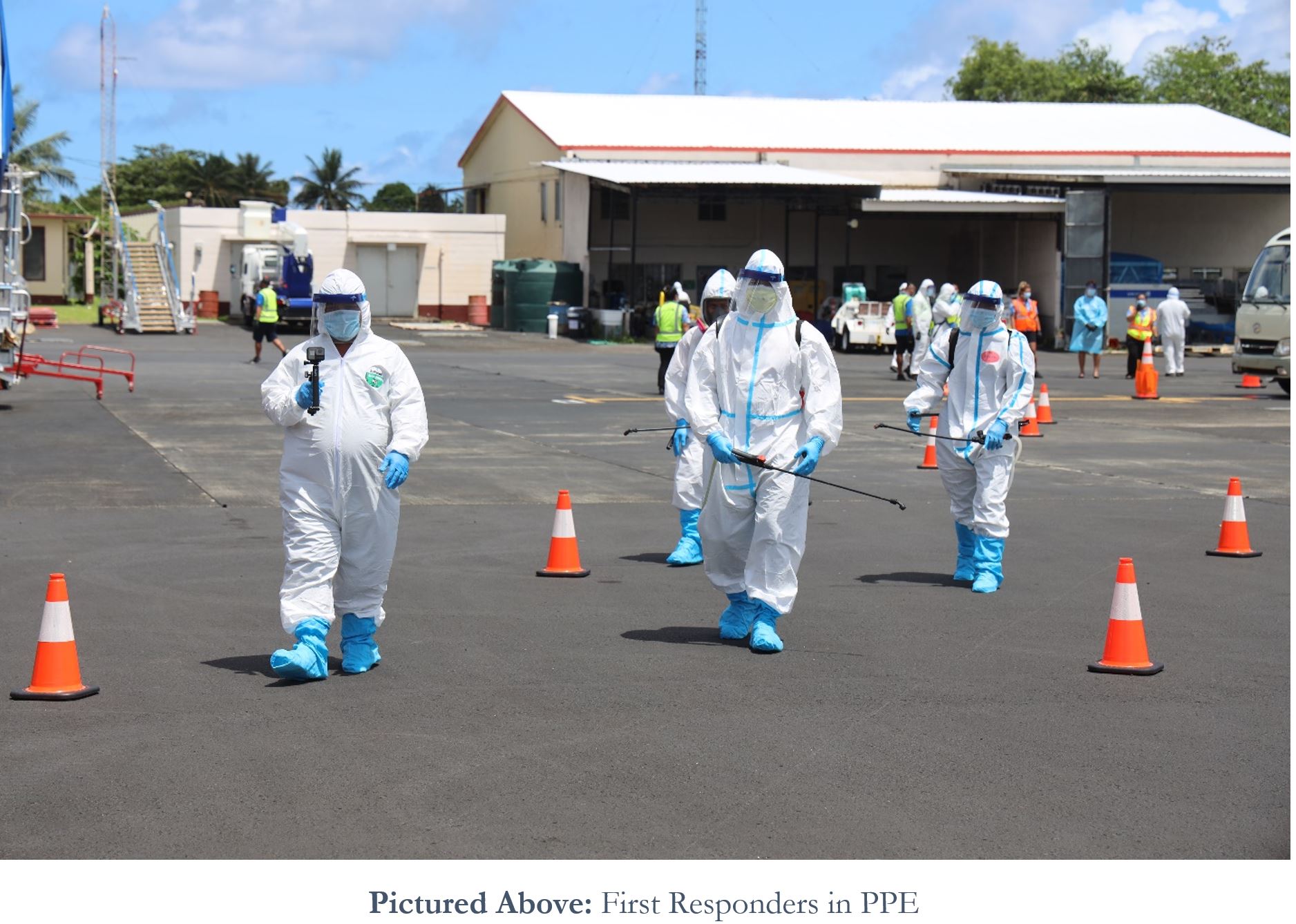 PALIKIR, Pohnpei—On August 6th, 2020, the COVID-19 Task Force of the Federated States of Micronesia (FSM), in partnership with the COVID-19 Task Force of the State of Pohnpei et al., conducted a simulation exercise in preparation for the eventual repatriation of FSM citizens residing in Pohnpei. Although the exercise demonstrated significant improvements from the simulation exercises in June, it was also noted that significant gaps remain. While Pohnpei State had been targeting August 8th, 2020 as a potential repatriation date for FSM citizens residing on Pohnpei, His Excellency David W. Panuelo, President of the FSM, after being briefed by the FSM COVID-19 Task Force, agreed with the recommendation that the State and Nation is not yet ready for repatriation at this time.

The simulation exercise demonstrated that, particularly at the Point of Entry (i.e. the airport and its surrounds) and Quarantine Site (i.e. the Emergency Medical Unit/Chinastar Hotel), substantial improvements have been made. The view of the Task Force is that the Point of Entry and Quarantine Site are each approximately ninety percent (90%) ready for repatriation efforts.

Gaps included a change in process (e.g. the airport quarantine room was used for stabilizing a Person Under Investigation) and a change in type of personal protection equipment (PPE). Personnel require additional competency in using coveralls.

The Medical Monitoring Area (MMA) at Misko Beach, which is intended to serve as both an isolation facility as well as a quarantine site, has significant infrastructural issues, including that essential equipment was not available. Of particular note is that the MMA facility is not wheelchair accessible, that there is no triage or testing site at the facility, and that the facility has insufficient staff. No medical doctors other than the Incident Commander participated in similar exercises. Of similar concern is that multiple medical personnel in Pohnpei State have allegedly resigned from their employment at precisely the time when the Nation cannot afford to lose such personnel.

Additional gaps allegedly remain in areas such as capacity-building. The Task Force informed the President that, to the knowledge of the FSM National Government, ventilators have not been used or tried, and contact tracing workshops intended for sixteen (16) participants have been postponed after only five (5) have shown up. Further, while progress has been made in acquiring sufficient testing capacity for repatriating citizens abroad, the contract for one such organization has not yet been finalized.

“There is a lot of progress made from the previous assessments, but also there are gaps,” said Dr. Eliaser Johnson, the FSM’s epidemiologist, in the Task Force’s briefing to the President. “Our overall recommendation, looking at the exercise today, is to delay the repatriation.”

“The Secretary repeats your idea of wanting to have an airtight system,” Dr. Eunyoung Ko, the World Health Organization’s Country Liaison Officer to the FSM, said in the briefing to President Panuelo. “All of our efforts, drills, investment, facility building, and simulation drills done so far have greatly improved the level of safety. However, what the assessment team saw during today’s exercise was still not meeting the expected standard, particularly due to recent changes in the protocols and processes. We will continue to assist Pohnpei State to achieve their goal of maximal safety through technical dialogues and process.”

“We cherish being COVID-19 free and we must work very hard to make sure that this remains the case,” Dr. Livingston A. Taulung, Chair of the FSM Task Force and Secretary of the Department of Health & Social Affairs said.

“For the safety of our country, I cannot make a decision to open the country unless I am highly convinced and confident that our state of readiness is airtight,” President Panuelo said.

We have 2097 guests and no members online