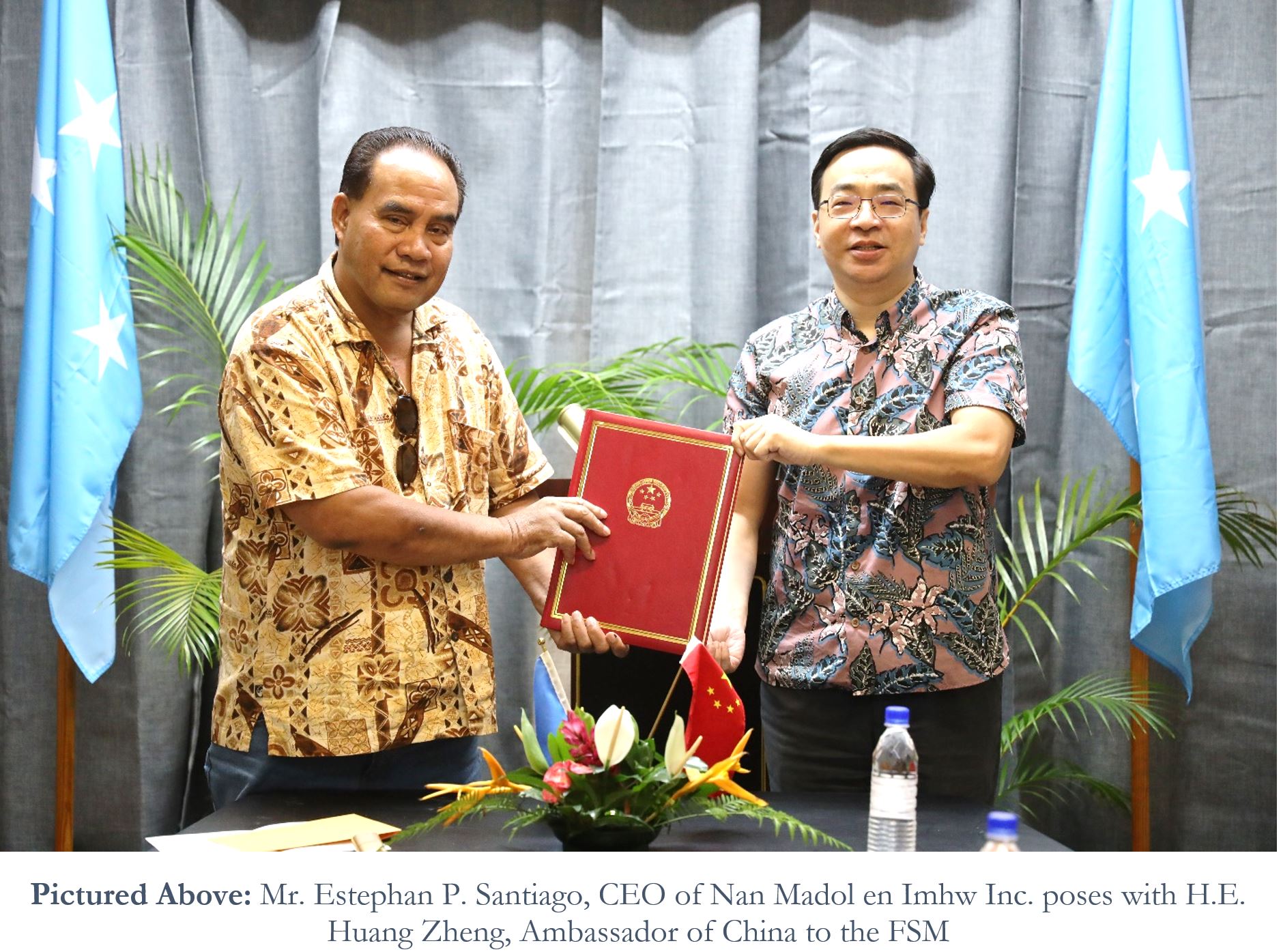 FSM citizens may recall that during the State Visit to China by His Excellency David W. Panuelo in December, 2019, that amongst the conversations between President Panuelo and President Xi, as well as amongst the Members of the Delegation (including the Honorable Esmond B. Moses, Vice Speaker of the 21st FSM Congress), food security initiatives were discussed in detail. An example of such a food security project is the coconut farm in Pohnpei State, which is presently 1.33 hectares in size with 150 yellow dwarf coconuts, 150 red dwarf coconuts, and 150 green dwarf coconuts planted as of December 2019.

In a diplomatic note on behalf of China to the FSM dated August 11th, 2020, the Chinese Embassy wrote: “We Chinese always attach importance to the food security of developing countries, including the FSM, and [we stand] ready to offer relief and assistance should any emergency or concerning situation occur due to climate change, epidemics, or any other natural disaster. In this spirit and upon conscientious review, the Embassy is pleased to inform the [FSM] Department [of Foreign Affairs] that a USD 28,000 donation has been approved to fund the [“Replanting of Stable Food Crops in Madolenihmw, Pohnpei, FSM”] Project.”

Although he was not present in the ceremony due to attending to other matters of national import, President Panuelo later said in a statement: “During the time of this COVID-19 Pandemic, it is increasingly clear that the People of the FSM—who are presently reliant on imported foodstuffs for the bulk of our caloric intake—would greatly benefit from transitioning to a local and sustainable diet. This move has already been advocated by the FSM National Government and the respective State Governments of Yap, Chuuk, Pohnpei, and Kosrae in the context of our crisis with Non-Communicable Diseases (NCDs), of which more than one out of every three FSM citizens has diabetes resulting, in part, from a diet largely based on empty calories, such as white rice.”

“I am beyond grateful to the People and Government of China for their assistance to Nan Madol en Ihmw, Inc. for their efforts in promoting food security in the Municipality of Madolenihmw, and I would strongly encourage all State and Municipal Governments throughout the FSM to consider working with the FSM National Government in approaching China to continue supporting our food security initiatives. I thanked President Xi for Ambassador Huang’s service to the FSM in December 2019, and I echo again these sentiments today. China showed us respect by recognizing our sovereignty when we became an independent Nation, and I urge all FSM citizens to see our FSM-China Great Friendship as a blessing.”

At present, the FSM National Government is cooperating with China to see how it can receive thirty (30) mobile isolation units for the purpose of combating the COVID-19 Pandemic and preventing its entry into the FSM. As of September 2nd, 2020, the Nation remains COVID-19 free.

Later in the evening, President Panuelo met with Ambassador Huang, in his capacity as Dean of the Diplomatic Corps, in the first of a series of informal dinners with the Nation’s diplomats to address issues of import affecting the FSM and its citizens.

We have 269 guests and no members online