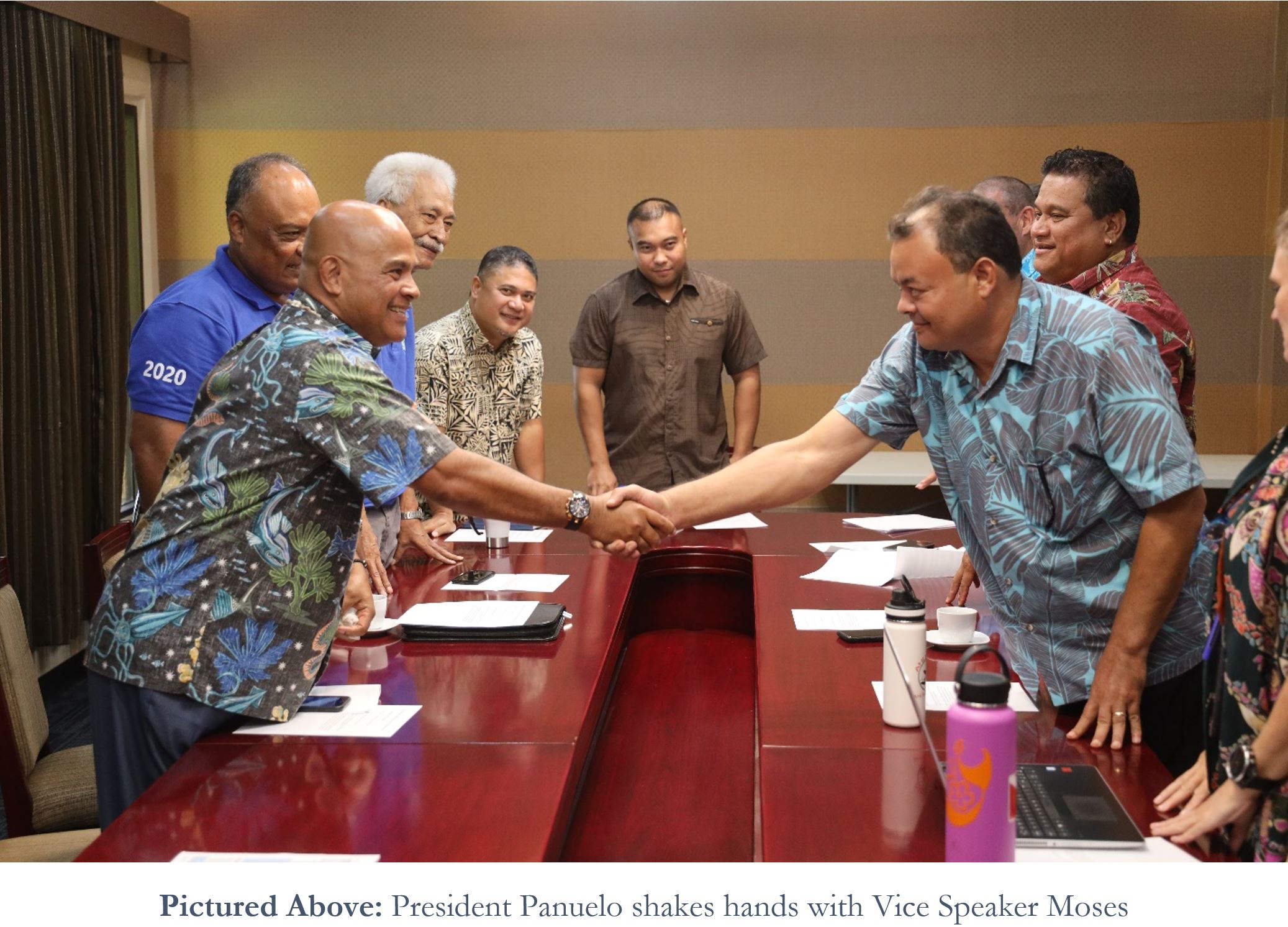 PALIKIR, Pohnpei— The 21st Congress of the Federated States of Micronesia (FSM) began its Fifth Regular Session on September 14th, 2020. After the opening session, His Excellency David W. Panuelo and the Honorable Yosiwo P. George received the Committee to Wait, chaired by the Honorable Esmond B. Moses, Vice Speaker of the 21st FSM Congress, with committee member the Honorable Ferny S. Perman, Chair of the Congressional Committee on Health and Social Affairs.

The bulk of the Committee to Wait discussed the proposed repatriation process for FSM citizens stranded abroad, as well the National Government’s proposed budget for Fiscal Year 2021. Regarding the latter, it was noted that the Government’s operations budget has a proposed increase of five percent (5%), primarily to reflect the restructuring of the Department of Justice (such as its new Division of Anti-Human Trafficking), as well as the establishment of a field office for the National Public Auditor in Chuuk State, and additional staff in the Office of the President’s Division of Public Information.

The Honorable Livingston A. Taulung, Secretary of the Department of Health & Social Affairs and Chair of the FSM COVID-19 Task Force, described where the Government is with regards to beginning a formal repatriation process for FSM citizens stranded abroad.

The Secretary explained that, pending the formalization of these agreements, a successful simulation exercise in Pohnpei State, a round of COVID-19 tests for prospective repatriating citizens, the concurrence of the FSM COVID-19 Task Force and Pohnpei State’s COVID-19 Task Force, and the approval of the President, that repatriation-related activities might begin in the coming weeks with the first wave of repatriating citizens to potentially arrive sometime in October. The National Government has yet to designate a specified date to formally begin repatriating stranded FSM citizens.

“As for the simulation exercises in Yap,” Secretary Taulung continued, “We are hoping to secure a flight through a domestic carrier soon. As you know, Chuuk State is still not ready to accept our teams, but we’re advised that, once Yap is finished, then Chuuk will most likely accept our assessment team.”

The remainder of the meeting targeted discussion on pending and proposed legislation, such as the bill to include renewable energy into FSM Petroleum Corporation/Vital’s mandate, as well as brief discussion on nominations for advice and consent positions.

“We need to put somebody that can head our Consulate in Honolulu,” the President said, noting that the relative lack of coordination on the part of the FSM National Government in Hawaii when compared to Guam is due to the lack of a Consul General. “Shanty Asher Sigrah is a fine candidate and I endorse her without any reservation. I urge Congress to pass a resolution for resubmission.”

We have 1239 guests and no members online