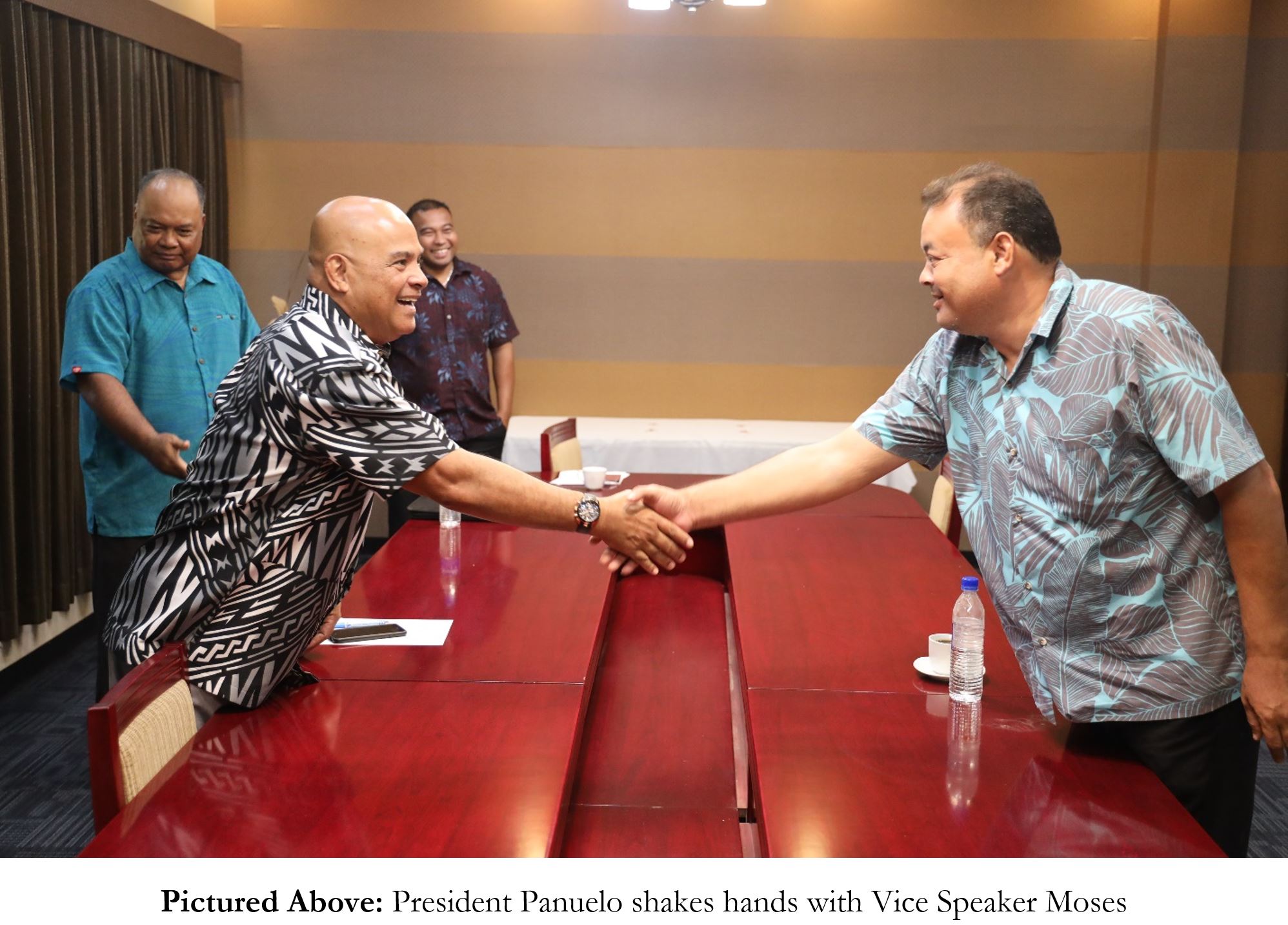 PALIKIR, Pohnpei-- The 21st Congress of the Federated States of Micronesia (FSM) began its Ninth Special Session on November 16th, 2020. After the opening session, on November 17th His Excellency David W. Panuelo and the Honorable Yosiwo P. George received the Committee to Wait on the President, chaired by the Honorable Esmond B. Moses, Vice Speaker of the 21st FSM Congress, with committee member the Honorable Ferny S. Perman, Chairman of the Congressional Committee on Health and Social Affairs.

Arguably the bulk of the meeting focused on the Nation’s tentative plan to conduct a humanitarian repatriation flight for stranded medical patients in December 2020, with assistance from the United States Armed Forces, and other development partners. The President described the Government’s intention to house all repatriating citizens at a pre-determined pre-quarantine site, inclusive of multiple COVID-19 tests, followed by transport on a disinfected vehicle (with a COVID-19 tested driver) directly to the humanitarian flight, itself disinfected with a COVID-19 tested crew, all wearing appropriate personal protection equipment. For the purpose of this proposed December 2020 repatriation effort, all FSM citizens must be full-time residents of Pohnpei State.

The Executive Branch intends to finalize the list of the repatriating citizens by this Friday, November 20th. While the bulk of the citizens being repatriated will be medical patients and their attendants, other categories of stranded citizen, including students, may also be chosen depending upon the availability of space on the flight and at the quarantine site in Pohnpei State.

The second item on the agenda that offered a disproportionate amount of discussion was with regards to the 4th FSM Constitutional Convention, and the public education efforts regarding two proposed initiatives that will be on the March 2nd, 2021 National Election ballot. President Panuelo requested the 21st FSM Congress’ financial support for this purpose, and noted that he would be signing a Presidential Order developing a Task Force later in the day. The Presidential Order, which was signed later that afternoon, is inclusive of members of the Constitutional Convention, the Executive Branch, the Congress, representatives of the State Governments, and three non-Government Organizations abroad, namely: We Are Oceania, based in the U.S. State of Hawaii; the COFA Alliance National Network (CANN); and the FSM Association in Guam. The Presidential Order may be found here: https://gov.fm/files/Presidential%20Orders/2020_November_17-EO_Public_Education_Task_Force_FSMConcon_Amendments.pdf

President Panuelo advised Vice Speaker Moses and Senator Perman that he intends to give a video address in the coming days that will describe the proposals the 4th Constitutional Convention has passed, which include a proposal to make it easier for future amendments to be considered by lowering the voting threshold for such amendments, as well as a proposal to offer a means of allowing FSM citizens to regain citizenship if it is lost, and to maintain ownership of citizenship in a foreign country if such ownership was already acquired.

The third item on the agenda that offered significant discussion was regarding the extension of the President’s Declaration of Public Health Emergency, first instituted on January 31st, 2020. The President noted that the FSM COVID-19 Task Force has suggested removing the ban on outbound travel, but advocated retaining all travel restrictions into the country until such a time that the Nation is more able to combat the COVID-19 Pandemic. “The repatriation of the medical patients stranded in Guam, and the return of the MV Caroline Voyager, will be stretching our resources; after both events have concluded, we’ll be better prepared to see to the return of the MV Chief Mailo and further repatriation efforts, either from Guam or from Hawaii,” President Panuelo said.

The remainder of the meeting briefly addressed the other items on the agenda, such as the President’s request for Congress’ financial support for the Nation’s application to join the International Police Organization (INTERPOL), an effort to expand the Tourism Sector Mitigation Fund to offer assistance to more categories of businesses, funding for the College of Micronesia-FSM’s endowment, and a proposed amendment to the law governing the Joint Committee on Compact Review & Planning’s mandate.

We have 522 guests and no members online