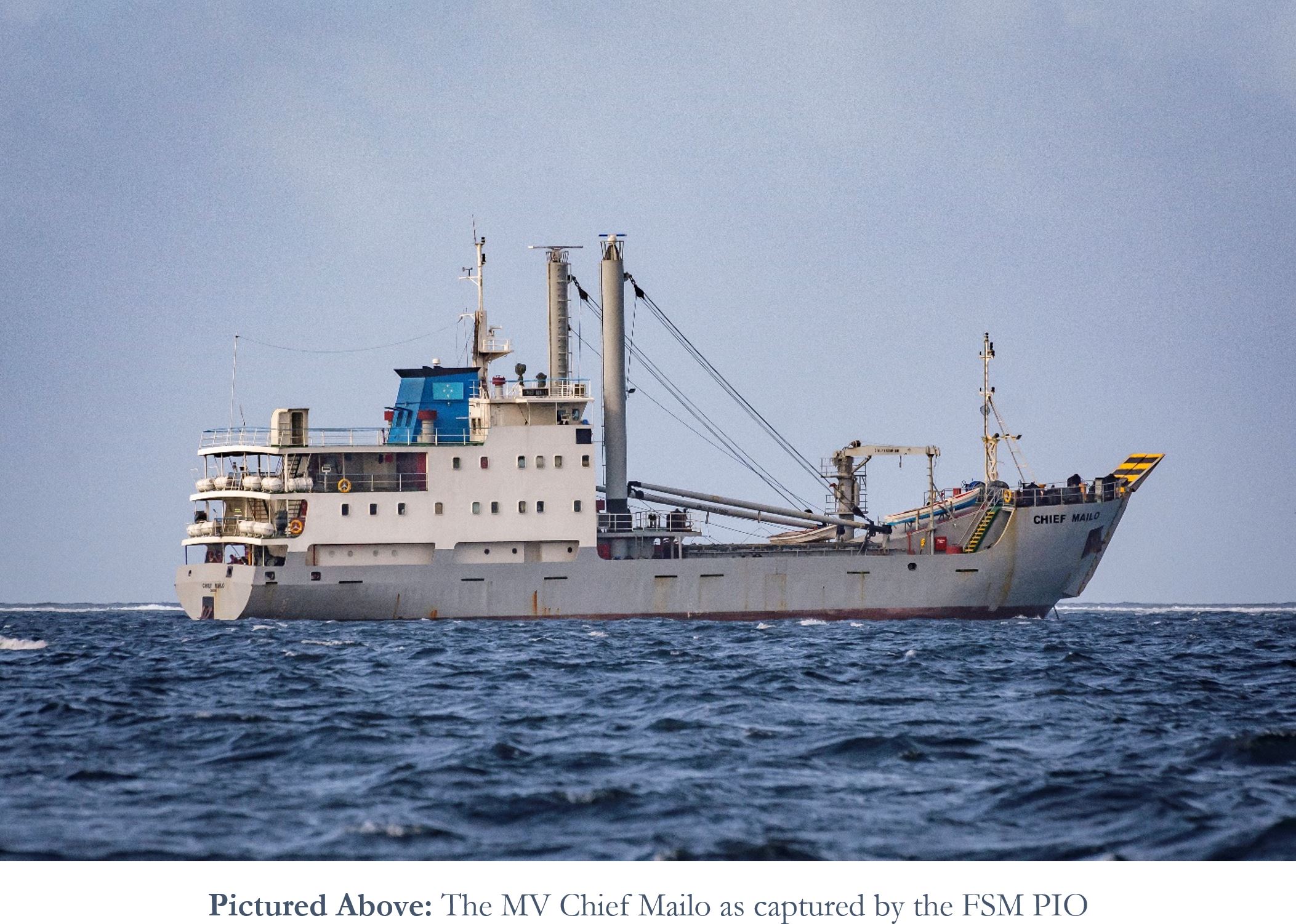 PALIKIR, Pohnpei—On January 19th, 2021, the COVID-19 Task Force of the Federated States of Micronesia (FSM) met to discuss a range of issues, such as the current status of the confirmed case of COVID-19 onboard the MV Chief Mailo, and the status of the Nation’s COVID-19 vaccination distribution. In the meeting, Dr. Eliaser Johnson—the Nation’s epidemiologist—described the January 18th, 2021 COVID-19 test results for the crew of the MV Chief Mailo, wherein all crew were again found to be negative except for the positive case identified on January 7th, 2021. It is the opinion of the COVID-19 Task Force, to be confirmed in a subsequent antigen test on January 22nd, 2021, that the individual isolated onboard the MV Chief Mailo with COVID-19 has a “historical case”, i.e. that he is not presently sick and is not infectious.

Dr. Johnson explained that when the crew of the Chief Mailo were tested again on January 18th, 2021, that all crew were tested negative for COVID-19 except for the positive case from January 7th. “He is still COVID-19 positive,” Dr. Johnson said, “So we also ran an antibody test—a blood serum test, which was positive for immunoglobulin G (IgG). The crew remain asymptomatic and stable. Antibodies most commonly become detectable 1–3 weeks after symptom onset, at which time evidence suggests that infectiousness likely is greatly decreased and that some degree of immunity from future infection has developed. So, putting everything together…I concluded that although we still need to finish the quarantine process that this is an historical case. The individual was likely infected in the past, likely before October.”

“The question, then,” Dr. Johnson continued, “Is why is he testing positive now through PCR tests but not before? That’s a good question, and we have reached out to the U.S. Centers for Disease Control & Prevention for advice, but what we know is that some people can continue to show positivity for COVID-19 on their test long after the infection is over. The tests can pickup all the markers that are consistent with COVID, but it cannot tell you whether it’s an active infection or remnants from an old infection.”

There is no evidence of any transmission of COVID-19 on the Chief Mailo, although the Nation’s health teams continue to monitor the situation diligently.

Dr. Johnson recommended that the antigen test, to be conducted on January 22nd, will help determine the next stage of the quarantine regime for the crew of the Chief Mailo, who remain onboard the vessel and under 24/7 surveillance from both FSM National and Pohnpei State law enforcement.

The COVID-19 Task Force meeting also discussed recent updates to the Nation’s vaccination distribution strategy. As His Excellency David W. Panuelo, President of the FSM, noted in a January 11th, 2021 address to the Nation, it was the intent of the Government that last week all FSM States would receive the vaccine. This has occurred and the vaccine is being given across the Nation.

Noting President Panuelo’s call for weekly shipments of the COVID-19 vaccine, representatives of the Embassy of the United States of America noted that to their understanding the FSM National Government must use a certain percentage of its vaccines before additional shipments are sent, but that as the FSM is treated with the same priority as any U.S. State that shipments will occur quickly following the Government’s report that vaccines have been used.

More than 8,000 additional doses of COVID-19 vaccine arrived in the FSM on January 9th, 2021. The Government expects additional shipments of the vaccine towards the end of January to the beginning of February.

After the COVID-19 Task Force meeting concluded, the Office of the President became in receipt of a request from the 21st FSM Congress to attend a public hearing on Congressional Bill 21-348, which would “further amend Title 41 of the Code of the [FSM], as amended, by adding a new Chapter 12, for the purpose of making the COVID-19 vaccine mandatory for all citizens and residents of the FSM, and for other purposes.”

As of January 19th, 2021, it is remains the intent of the FSM National Government to ensure a 100% COVID-19 vaccination rate for the FSM, although unless and until Congressional Bill 21-348 passes vaccination remains voluntary, not mandatory.

As of January 19th, 2021, the single confirmed case of COVID-19 onboard the MV Chief Mailo remains isolated and contained, and there is no threat of community transmission. Citizens and residents remain encouraged to practice physical distancing, to frequently wash their hands, and to wear a mask if in a public place. In the event COVID-19 reaches any community in the FSM, President Panuelo will implement the Nation’s Social Distancing Decree and, via a video statement, proclaim a change in the Nation’s COVID-CONDITION level, inclusive of making physical distancing and mask wearing mandatory, among other measures.

We have 1989 guests and no members online