In Memoriam: The Honorable Livingston A. Taulung 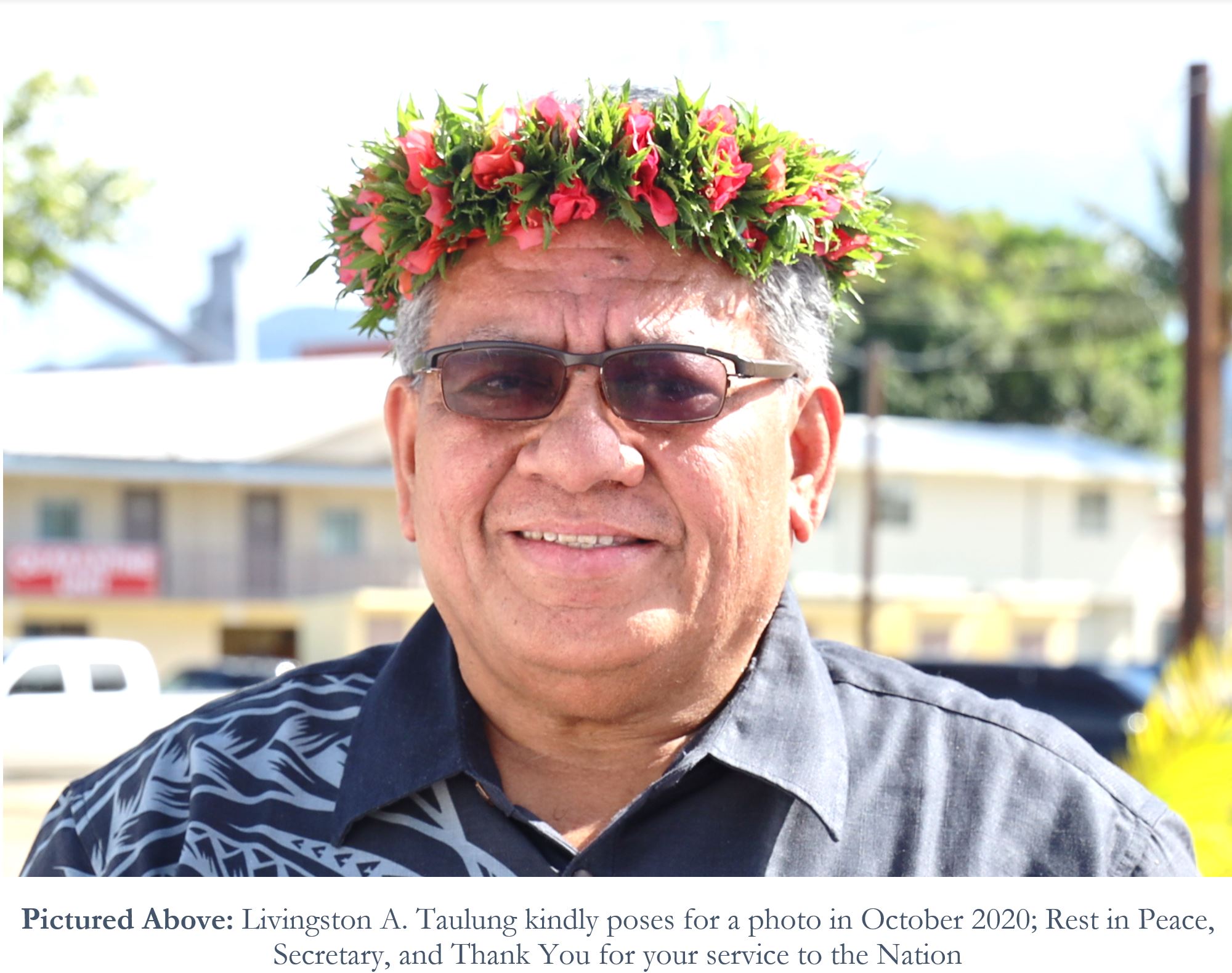 In Memoriam: The Honorable Livingston A. Taulung

PALIKIR, Pohnpei—On February 15th, 2021, the Honorable Livingston A. Taulung, Secretary of the Department of Health & Social Affairs, passed away.

Born April 3rd, 1957 in Tafunsak, Kosrae State, Livingston A. Taulung attended the Community College of Micronesia’s School of Nursing in Saipan where, after graduating with an AS in Nursing in 1977, he later acquired two Bachelor of Science degrees at Eastern Oregon State College (now known as Eastern Oregon University), and a Diploma in Community Health, Surgery, & Medicine from the University of Hawaii’s School of Medicine. Livingston A. Taulung remained engaged with continuing education activities and programs throughout his life, such as a course in 1997 on Rapid Response for Avian and Pandemic Influenza, which he had cited several best practices from in January 2020 when the Nation began learning about COVID-19.

Livingston A. Taulung spent his career dedicated to public service where he championed, designed, and implemented public health programs and activities. Whether in his previous capacities as a Health Planner, Staff Physician, Chief of Staff, and Director of Kosrae State’s Department of Health, or in his most recent capacity as the Secretary of Health for the Federated States of Micronesia (FSM) at large, Livingston A. Taulung rightfully carried a reputation as extraordinarily capable at, and equally committed to, protecting the Nation’s vulnerable populations.

The FSM National Government has been remarkably fortunate to have been blessed with Livingston A. Taulung’s service to the Nation and its citizens, for he represented the virtues the Nation stands for and believes in. Livingston A. Taulung spent every day of his life in service to others, spreading peace, friendship, cooperation, and love in our common humanity to everyone he encountered.

In his capacity as Secretary of Health, Livingston A. Taulung strived to ensure the Nation was protected from the COVID-19 Pandemic. It is not a coincidence that the date the FSM first formally became aware of the novel coronavirus—January 24th 2020—is the same date that Livingston A. Taulung became sworn in as Secretary. Informing President Panuelo all that he knew about the emerging situation was Livingston A. Taulung’s first action as Secretary, and building the Nation’s defenses against the virus became his top priority. It is the opinion of the FSM National Government that the Nation’s continued COVID-19 free status can be chiefly attributed to Secretary Taulung’s medical expertise, dedication, and commitment to public service and public health.

His Excellency David W. Panuelo, President of the FSM, has proclaimed an official period of mourning. The Presidential Proclamation is available here: https://gov.fm/files/Proclamation-The_Late_Honorable_Livingston_Taulung.pdf

We have 554 guests and no members online