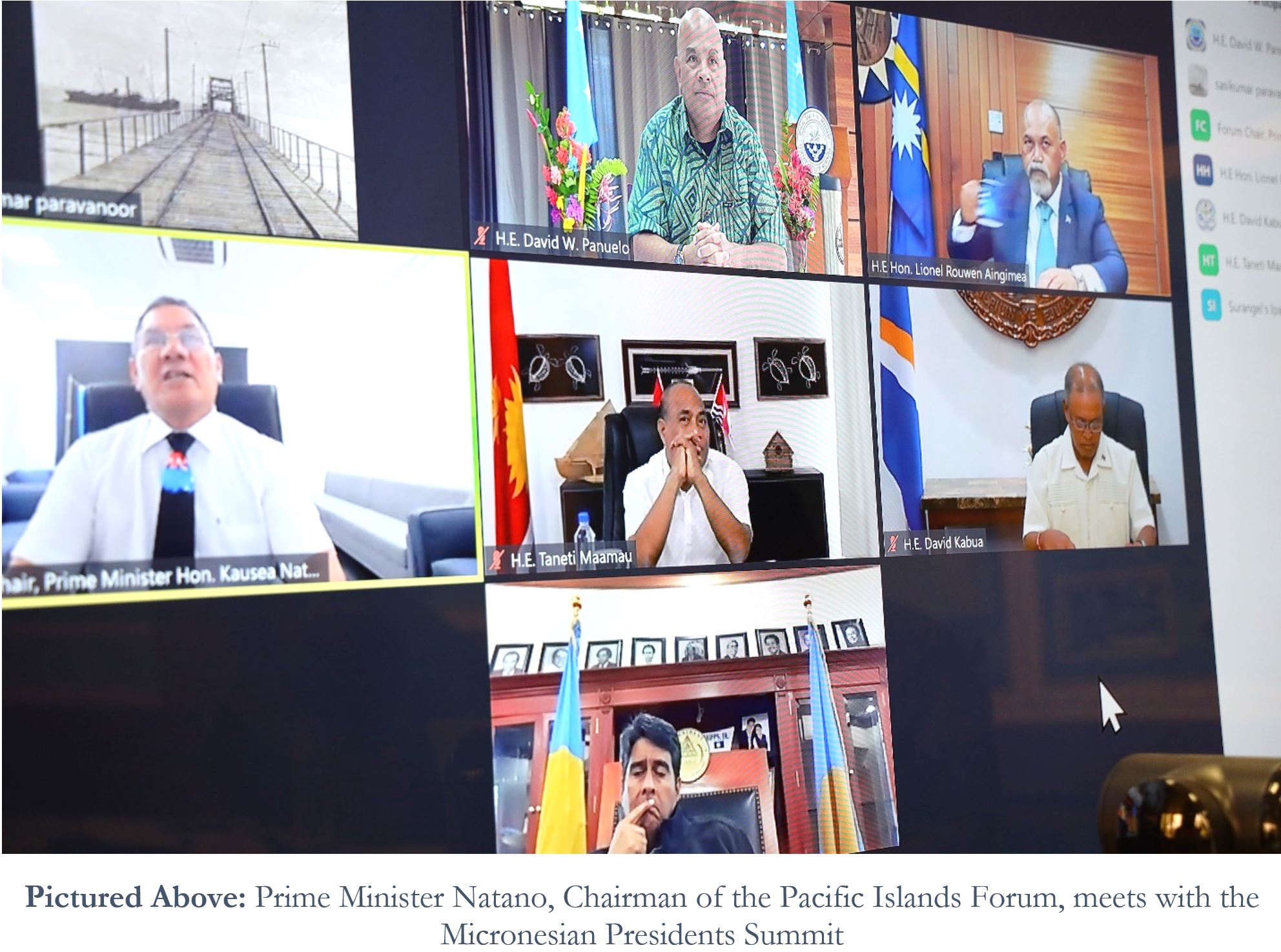 PALIKIR, Pohnpei—On February 17th, 2021, the Government of the Federated States of Micronesia (FSM) sent a diplomatic note to the Republic of Fiji in its capacity as the host for the Pacific Island Forum Secretariat (PIF). The note, which followed a convening of the Micronesian Presidents Summit (MPS), begins a one-year process for the FSM to formally withdraw from the PIF, starting on February 17th, 2021, and concluding on February 14th, 2022. The FSM intends, however, to remain a full member of each individual CROP agency, e.g. the Secretariat to the Pacific Community (SPC), Forum Fisheries Agency (FFA), et al. The diplomatic note may be found here: https://gov.fm/files/Note_Verbale__Statement_of_Denunciation_February_17_2021.pdf

President Panuelo spoke with the Presidents of the Republic of Nauru, the Republic of Kiribati, the Republic of Palau, and the Republic of the Marshall Islands regarding the MPS’ withdrawal from the PIF. “I’ve consulted with our Speaker of Congress, [the Honorable Wesley W. Simina], and other Senators. [A decision has been made] for our denunciation of the PIF.” Citizens interested in reviewing the President’s letter to Speaker Simina on this matter may find it here: https://gov.fm/files/February_15_2020-Ltr_to_Spk_Re_PIF.pdf

President Panuelo and the other Presidents of the MPS spoke at length about their internal processes for PIF withdrawal. While there was discussion on the MPS countries jointly submitting their denunciations at the same time, it was agreed that the members of the MPS will denounce the PIF in a sequence, so as to allow their respective internal processes to properly conclude.

Much of the MPS’ discussion was with regards to how leaving the PIF impacts—or, conversely, doesn’t impact—assistance from foreign donors. One of the MPS Presidents described what amounted to a threat from one external partner that leaving the PIF would mean a loss of funding in a particular category, to which that President noted to the MPS that the exclusive beneficiaries of that funding are countries in the South Pacific (as opposed to the North Pacific). Another MPS President described in detail how multiple countries, who otherwise donate to the PIF, are now seeking closer bilateral relations, and how his Government has assessed that withdrawal from the PIF is advantageous.

President Panuelo, for his part, noted that the FSM National Government’s Working Group for PIF withdrawal has been preparing a similar report, which notes that leaving the PIF has “no serious impact” for the FSM. President Panuelo noted that, of all the reasons to ensure the Gentleman’s Agreement was upheld, allowing the PIF to have a larger impact in the North Pacific was one of them.

Partway through the meeting, the Honorable Kausea Natano—Prime Minister of the Republic of Tuvalu and Chair of the PIF—joined the MPS meeting to describe the PIF’s thoughts on the Micronesian countries’ withdrawal. Chairman Natano noted that the PIF is reviewing the selection process for the appointment of a Secretary General, and invited the MPS countries to play an active role in those discussions.

President Panuelo and the other Presidents of the MPS described that, while they appreciated the Chair’s diplomacy, and agreed that reform in the PIF is necessary, that—because countries who were familiar with the Gentleman’s Agreement openly and boldly claimed it doesn’t exist—trust in the structure of the PIF’s dynamics was fractured.

“It would take a very monumental reform of the [PIF], in my humble opinion, for us to be able to come back to the table to discuss future options,” President Panuelo said to Chairman Natano. “As sovereign nations, we will continue to work with you closely on issues like Climate Change and illegal, unreported, and unregulated fishing…. But, as I was telling my fellow Presidents moments ago, I have [made the decision] for our denunciation to be sent, and it will be sent later today.”

We have 1943 guests and no members online