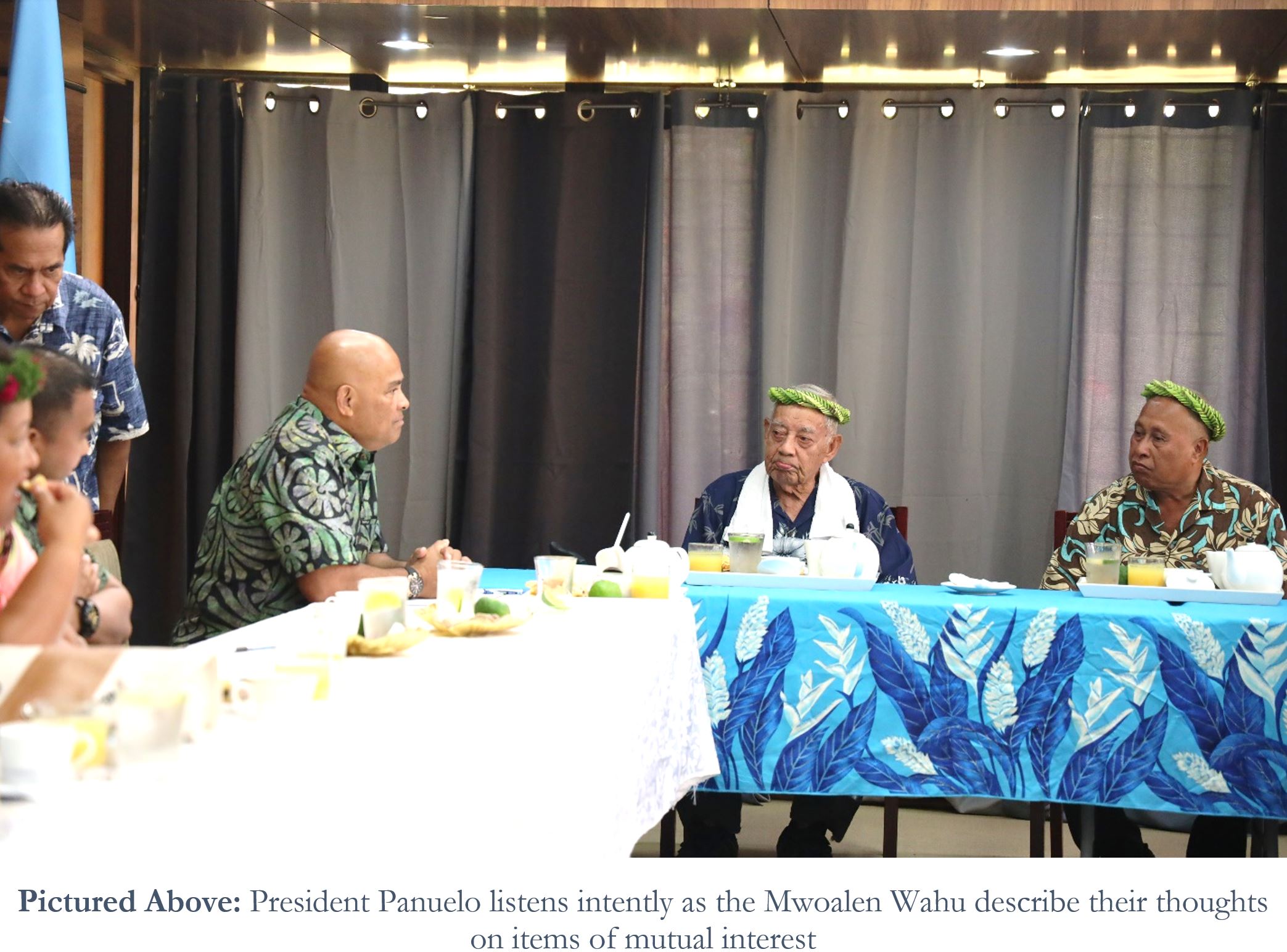 PALIKIR, Pohnpei—On February 18th, 2021, His Excellency David W. Panuelo—President of the Federated States of Micronesia (FSM)—received members of Pohnpei State’s traditional leadership i.e. the Mwoalen Wahu for the purpose of briefing them on the Nation’s COVID-19 vaccination programming, and the status of the MV Chief Mailo and her crew.

Regarding the COVID-19 vaccination program, President Panuelo advised the Mwoalen Wahu that, as of February 18th 2021, 9,266 total doses of the Moderna COVID-19 vaccine have been administered. The FSM has a total vaccination percentage of 8.8% of its population, making it no longer the least vaccinated of any nation, territory, or state affiliated with the United States of America. (The FSM was previously the least vaccinated of any U.S.-affiliated territory, but has just surpassed Puerto Rico for second least-vaccinated).

Members of the Mwoalen Wahu expressed their appreciation for the update, and juxtaposed it with a request that the Nation speed up its vaccination efforts so it can more quickly attain the minimal 70% vaccination rate for eligible citizens, a necessary component before the Executive Branch is willing to consider future repatriation activities. The Mwoalen Wahu suggested that focusing efforts on one individual municipality at a time may be fruitful for the Government’s efforts.

Another issue discussed between President Panuelo and the Mwoalen Wahu was with regards to the current status of the MV Chief Mailo and her crew.

Despite the FSM being a COVID-19 free country and the crew of the MV Chief Mailo receiving clearance from the FSM National Government to enter into the Nation in late January, the vessel has otherwise remained in Pohnpei’s lagoon. President Panuelo presented to the Mwoalen Wahu the Government’s justifications for the vessel to enter for dockside bunkering, including the ships’ reprovisioning of supplies and disembarkation of one member of the crew who is an FSM citizen who resides in Pohnpei State. The Mwoalen Wahu noted their agreement that a combination of factors—the National Government having jurisdiction over ports of entry into the Nation; the lack of COVID-19 onboard the MV Chief Mailo; the urgent need for the MV Chief Mailo to assist the State of Chuuk in its vaccination efforts, and others—demonstrated that the MV Chief Mailo ought to arrive at Pohnpei’s dock for its resupply and disembarkation of its crew.

At the same time the President was meeting with the Mwoalen Wahu, the Department of Transportation, Communication, & Infrastructure confirmed with Pohnpei Port Authority that the Chief Mailo will enter Pohnpei State’s dock for refueling and reprovisioning on Friday, February 19th, 2021. This was reinforced by a follow-up letter from the Governor of Pohnpei State.

The remainder of the meeting briefly covered various miscellaneous topics of interest, such as a request from the Mwoalen Wahu for the National Government to repair or improve the surrounding roads around Lukop, which may have been damaged by the ongoing Lukop Road Construction Project; the President sharing that, because Nan Madol is a World Heritage site, he will instruct the Government to review how it can repair the roads in Temwen; the President further reporting that the FSM is expecting to soon formalize acceptance of a United Nations Educational, Scientific, and Cultural Organization (UNESCO) office to be placed in Palikir; and broad updates on topics ranging from the Nation’s ongoing negotiations with the United States on the Compact of Free Association to the status of social protection programming for citizens affected by COVID-19.

We have 618 guests and no members online