Secretary Apis Updates Contractors on the FSM Infrastructure Development Program, Seeks Feedback on How to Improve Public-Private Partnerships in the Construction Sector 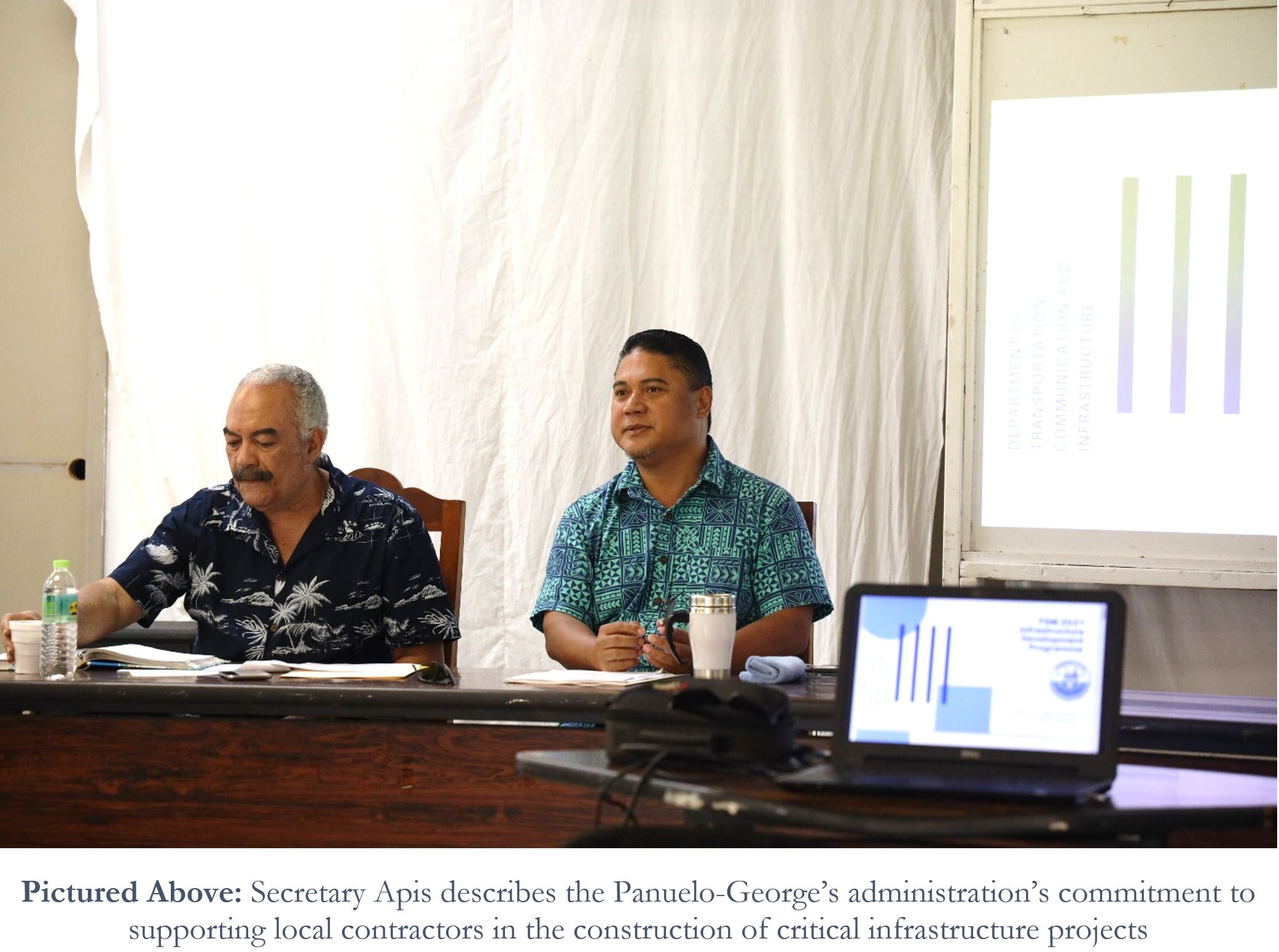 Secretary Apis Updates Contractors on the FSM Infrastructure Development Program, Seeks Feedback on How to Improve Public-Private Partnerships in the Construction Sector

PALIKIR, Pohnpei—Recently, the Honorable Carlson D. Apis—Secretary of the Department of Transportation, Communication, & Infrastructure (TC&I)—met with Pohnpei-registered private contractors. The aim of the meeting was to update them on the current status of the FSM’s Infrastructure Development Plan (IDP,) and to solicit their suggestions on how to improve the partnership between the contractors and the National Government, so as to ensure that local contractors play a more active role in the implementation of the FSM IDP. Similar meetings are being planned with the contractors from the other States.

Over the near to medium term, the FSM will be embarking on a construction drive on a scale never before equaled in its history. The construction boom will be fueled by already secured funding from a wide spectrum of reliable sources, including the Compact of Free Association, as Amended, the Federal Aviation Administration, the World Bank, the Asian Development Bank, and others. Approximately four hundred million dollars ($400,000,000) is already committed for these purposes.

For the State of Chuuk, the construction of five (5) dispensaries, and three (3) schools, are having their bidding documents prepared. A design consultant is being procured for the extension of Weno’s paved road, and scoping and design is expected to start in mid-2021 for the construction of the new Chuuk State Hospital.

For the State of Pohnpei, the RFP is ready for the Kinakapw to Lehn Diadi Waterline Project, as well as the new Teaching Clinic at the College of Micronesia-FSM. Meanwhile, bidding documents are being finalized for the construction of the Pohnpei Primary Healthcare Facility, as well as Pohnpei Island Central School’s (PICS) Campus & Library Improvements. A design consultant is being procured for the replacement of the Awak Bridge.

For the State of Kosrae, design consultants are being procured for the re-paving of the airport runway, improvements to Malem Elementary School, and improvements to the Lelu Causeway.

Contractors noted in the Q&A session that there are ongoing concerns regarding which standards are upheld in a given construction project, noting that a designer from the United States will follow different standards than a designer from New Zealand and the result on the ground in the FSM is inconsistent. Secretary Apis noted that the FSM is in the progress of developing its own FSM Building Code, which would seek to universalize construction requirements in the FSM.

Several contractors noted that an issue in their attainment of acquiring construction projects is that local contractors may not have the necessary equipment, manpower, licenses, or cash reserves to take on such projects, with the result being that foreign contractors frequently win the bid for FSM-based projects. Secretary Apis explained that, while there has been good progress in securing necessary funding for infrastructure programming, that an ongoing issue remains the scarcity of contractors. The Secretary suggested that, in addition to the development of the FSM’s own Building Code—currently in development—it may be fruitful for FSM-based contractors to consider partnerships with foreign construction firms.

“Our Government’s preference is really to have our own companies participate more in our projects,” Secretary Apis said in the meeting.

Citizens and stakeholders interested in reviewing the PowerPoint Presentation shown during at the meeting may find it here: https://tci.gov.fm/documents/pmu/presentation/presentation-to-pohnpei-contractors-2021.pdf

Contractors interested in receiving the most up-to-date bids and RFPs are advised to submit their interest at the Department of TC&I’s website at: https://tci.gov.fm/contact.html