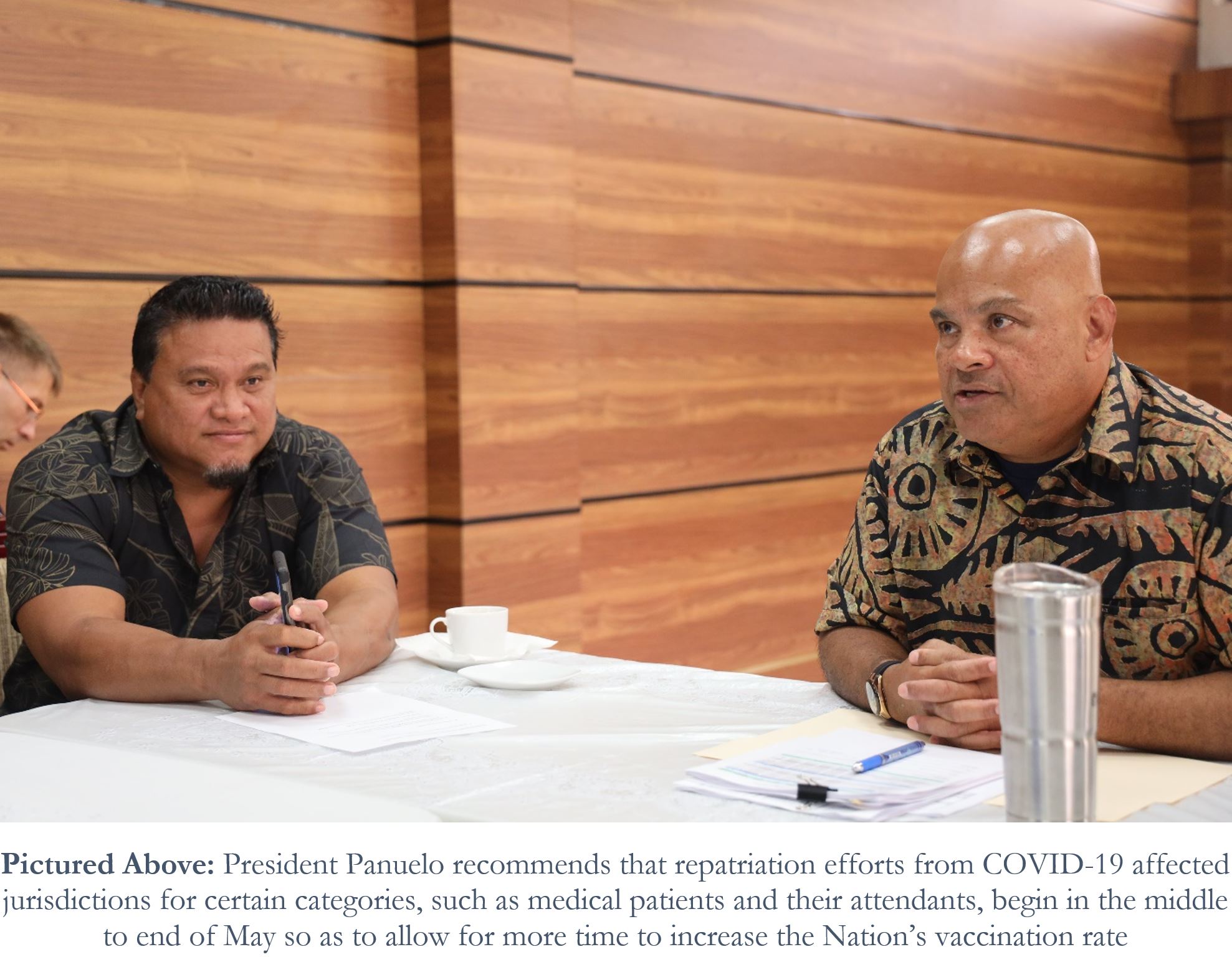 PALIKIR, Pohnpei— The 21st Congress of the Federated States of Micronesia (FSM) began its Tenth Special Session on March 22nd, 2021. After the opening session, His Excellency David W. Panuelo virtually received the Committee to Wait on the President, Chaired by the Honorable Ferny S. Perman, Chairman of the Congressional Committee on Health & Social Affairs, with committee members inclusive of the Honorable Isaac V. Figir, the Honorable Derensio S. Konman, and the Honorable Aren B. Palik.

Arguably the bulk of the discussion focused on the COVID-19 Pandemic, with foci on the Nation’s vaccination efforts and repatriation plans.

Regarding the vaccination efforts, President Panuelo described that, as of March 22nd, 2021, 23% of the Nation’s eligible population (i.e. adults aged 18 and up) have received their first dose of the vaccine, and 15% have received their second dose. The Government has asked the U.S. Centers for Disease Control & Prevention to send more Johnson & Johnson vaccines, which are not as fragile as the Moderna vaccines, to increase vaccination rates on lagoon islands, and in remote villages and communities. The documents informing the briefing President Panuelo gave the Senators may be found here: https://gov.fm/files/FSM_COVID19_Vaccination_March_22_2021_Update_for_CTW.pdf

The Honorable Senators probed for information on why the FSM’s vaccination rate is so slow compared to other jurisdictions, advising that to their knowledge misinformation on social media may be spreading unnecessary fear and concern over the vaccine. President Panuelo described that one avenue the Nation is considering to increase the COVID-19 vaccination rate is to tie citizens’ receipt of financial stimulus programming for low-income and elderly citizens with documentary evidence that said citizens have received their COVID-19 vaccine.

“If we mandate children to take certain vaccines before going to school for their safety and our Nation’s safety, it behooves our Nation’s adults to do the same before getting their financial stimulus,” President Panuelo said.

It was described that it may be beneficial for more national and state leaders to publicly take the vaccine.  It was advised that some public figures like President Panuelo and Senator Perman at the National level, and Governors Carson K. Sigrah and Reed B. Oliver at the State level, have taken their vaccines. Thus, it was recommended that the National COVID-19 Task Force work to greater publicize the efforts of elected officials to take the vaccine and/or promote its use.

Repatriation efforts were discussed disproportionately in comparison to other topics of interest. Senator Perman advised President Panuelo that Congress may be willing to extend the Declaration of Public Health Emergency to May 30th, 2021. President Panuelo, for his part, advised that the Government is targeting the middle to the end of May for the repatriation of medical patients and their corresponding attendants, so as to allow for more work to be done on the Nation’s vaccination efforts. President Panuelo also advised that, were it not for mechanical issues on the chartered Air Marshall Islands flight, repatriation from the Republic of the Marshall Islands can otherwise begin immediately. President Panuelo has authorized repatriation from the Republic of Palau to the FSM—of whom all stranded citizens in Palau are residents of the State of Yap—at the State of Yap’s nearest convenience.

Senator Perman inquired if President Panuelo is willing to use international commercial carriers for repatriation activities. President Panuelo advised that the National COVID-19 Task Force has been instructed to determine that possibility, but that it otherwise remains the Government’s intent to request the U.S. Government to procure a U.S. Coast Guard asset for the initial repatriation of medical patients and attendants, to include diplomats and medical professionals, to assist with vaccinations and ventilator training.

President Panuelo described that the Panuelo-George administration would be submitting several nominations for Congress’ consideration.

For the position of Secretary of the National Department of Education, President Panuelo has sent his formal nomination for T.H. Gardenia Aisek.

For the position of Public Defender of the FSM, President Panuelo has sent his formal nomination for Mr. Alik K. Jackson, Esq.

For the position of Permanent Representative for the Nation’s Diplomatic Mission to the United Nations in New York City, President Panuelo has sent his formal nomination for H.E. Jane Chigiyal.

For the position of Board Member of the FSM Telecommunications Corporation, representing the National Government, President Panuelo has sent his formal nomination for Mr. Mathew Chigiyal.

For the position of Board Member of the Trust Fund for the People of the FSM (i.e. the “Compact Trust Fund”), President Panuelo has sent his formal nomination for former President of the FSM, Emanuel “Manny” Mori.

For the position of Ambassador to the Republic of Fiji, President Panuelo intends to submit the Honorable Jeem S. Lippwe as his nomination.

The remainder of the meeting focused on updates on recent activities within the Executive Branch, such as the Government’s efforts to join the Western Interstate Commission on Higher Education, which would allow for FSM students to qualify for 150% of instate tuition for undergraduate degrees at participating institutions and 100% of instate tuition for graduate degrees; the signing ceremony for the first Green Climate Fund project for the FSM, which initiates the beginning of the 9.4 million-dollar Climate Resilient Food Security for Farming Households Across the FSM Project; and the transfer of 2.5 million dollars from the FSM to Portland, Oregon for the purchase of a new office for the FSM Consulate based there.

We have 334 guests and no members online