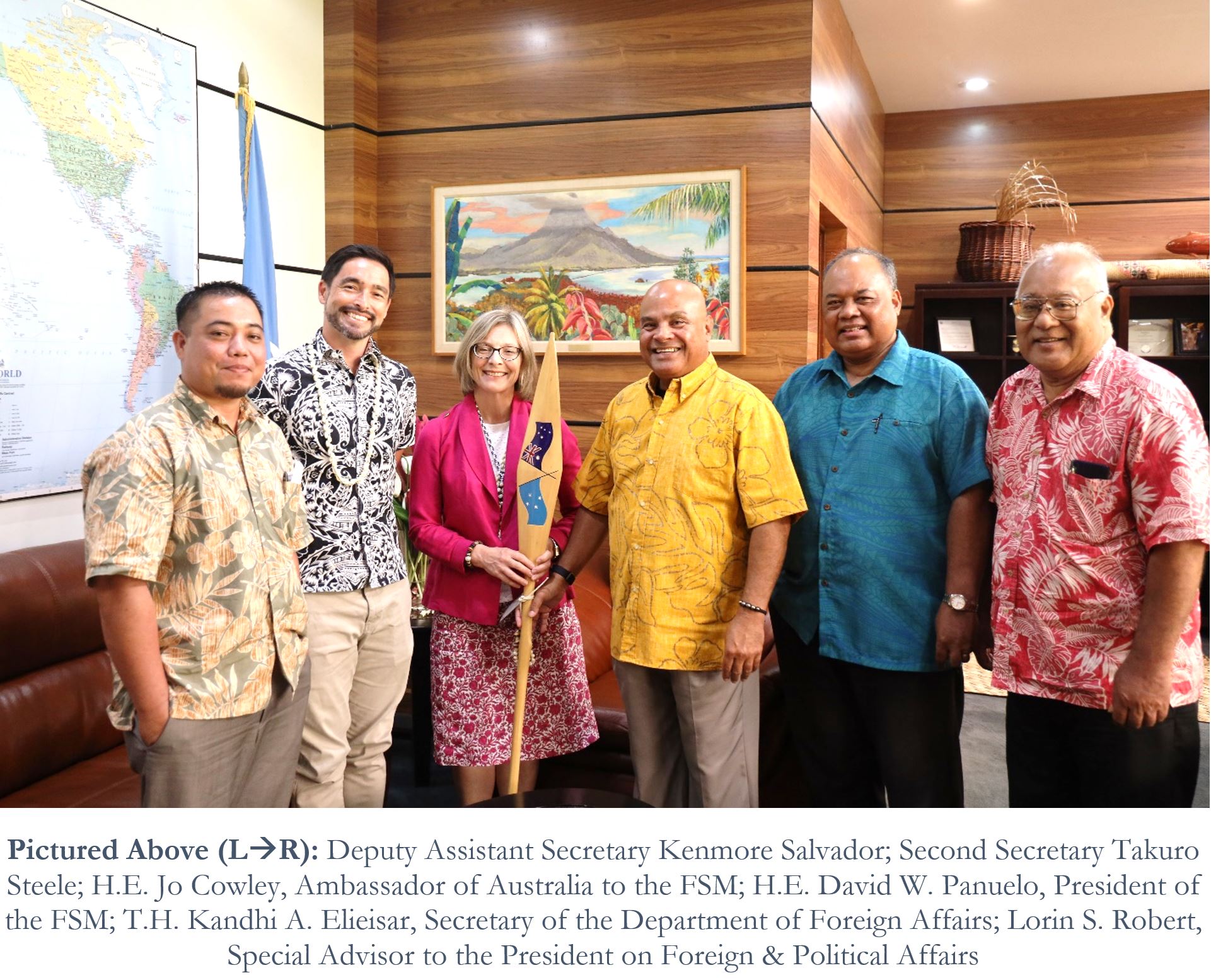 PALIKIR, Pohnpei—On May 27th, 2021, His Excellency David W. Panuelo—President of the Federated States of Micronesia (FSM)—received Her Excellency Jo Cowley, Ambassador of Australia to the FSM, in a courtesy call. The purpose of the meeting was to allow President Panuelo and Ambassador Cowley—who previously engaged virtually, due to the COVID-19 Pandemic—to have a proper in-person discussion, the great bulk of which focused on the FSM-Australia partnership.

President Panuelo began by emphasizing the People and Government of the FSM’s sincere appreciation for its close friendship with the People and Government of Australia, and the Nation’s intent to further strengthen and enhance its relations. “Ambassador, we extend our very warm welcome to you…. You’ll know that when I met with [the Honorable Scott Morrison, Prime Minister of Australia] in 2019, in Tuvalu, that I shared with him that we intend to reciprocate your Embassy here and open an Embassy in Canberra. That is still our intention. COVID-19 has delayed a lot of things but…our relationship is deeply important to us. Australia was pivotal in recognizing our Nation’s sovereignty back when we were seeking independence; Australia has provided, and continues to provide, crucial support towards our Nation’s security, as physically demonstrated through the construction and gifting of our Nation’s patrol boats and relevant training; and Australia has shown, and continues to show, that it is a true friend of the FSM, and the Pacific at large, in ways both measurable and immeasurable.”

President Panuelo made it a point to specifically thank Second Secretary and Consul of the Australian Embassy, Mr. Takuro Steele, for his superbly effective efforts in providing the FSM necessary and deeply appreciated assistance during his prolonged tenure as the Chargé d'Affaires. The Government publicly includes this appreciation in this release so that his family and friends abroad will be as proud of him and his service as the FSM National Government already is.

Ambassador Cowley noted that the Australian People and Government value their relationship with the FSM, and are focused on ensuring that Australian assistance is consistent with the FSM’s priorities.

The President and the Ambassador discussed the FSM’s interest in enhancing the Nation’s infrastructure, which was a key area in the President’s Inaugural Address in 2019. Ambassador Cowley advised that she is aware of the letter President Panuelo wrote to Prime Minister Morrison regarding infrastructure assistance, and that the Australian Infrastructure Financing Facility for the Pacific (AIFFP) can provide a mechanism for this to occur.

“I know the World Bank has just announced forty million [U.S.] dollars for climate-resilient roads in the FSM,” Ambassador Cowley said. “Would you like us to supplement or value-add to the World Bank project? Or should we be putting our funding into another one of your priorities?”

“I really appreciate that offer, Ambassador, that’s good news to us,” President Panuelo replied. “As I wrote to Prime Minister Morrison, our infrastructure is really an area that we want to focus on. It’s a blessing to hear that, for the first time, the FSM will be able to utilize the [AIFFP]. It’s entirely consistent with what I asked of Prime Minister Morrison. Please extend our appreciation to him and the Government of Australia for your kind support to our people.”

The bulk of the remainder of the meeting focused on mutual security interests, with an emphasis on the Nation’s genuine excitement and enthusiasm to receive the two new Guardian-class patrol boats. The patrol boats are scheduled for delivery to the FSM in March and August 2022, respectively.

The meeting ended on a positive note, with President Panuelo affirming to Ambassador Cowley his enthusiasm to strengthen the friendship and partnership between the FSM and Australia.

We have 1725 guests and one member online